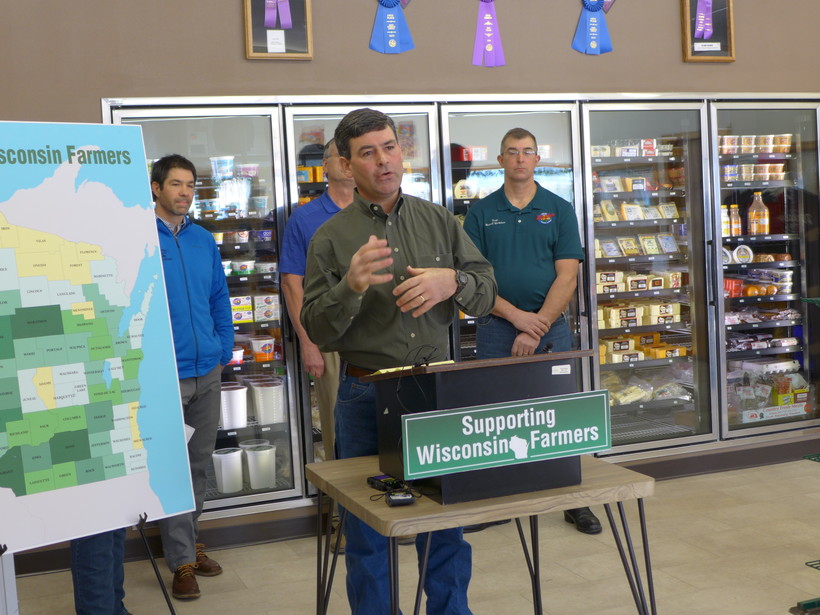 Assembly Republicans have released a plan focused on helping Wisconsin farmers that they say will take a "bigger and bolder" approach than the governor’s special session on agriculture.

Last week, Assembly Speaker Robin Vos, R-Rochester, announced that GOP lawmakers planned to introduce their own package of bills to help farmers after Gov. Tony Evers used his annual State of the State address in January to call a special session of the state Legislature to focus on the state’s dairy crisis.

Details of the Republicans’ new bills were released on Monday ahead of a public hearing by the Assembly’s Agriculture Committee scheduled for Tuesday, Feb. 11.

The package includes amendments to two bills brought forward by Evers for the special session.

One would create a new initiative to increase Wisconsin dairy exports to 20 percent of the nation's milk supply by 2024.

While Evers proposed creating the program under the state Department of Agriculture, Trade and Consumer Protection, Assembly Republicans want DATCP to create a partnership with the Wisconsin Economic Development Corp. and change the focus to include exports of meat products and crop products. The lawmakers also proposed increasing the program’s funding to $5 million instead of the $1 million proposed by Evers.

During a press conference in Westby on Monday, state Rep. Tony Kurtz, R-Wonewoc, said the governor's original bill was a good baseline.

"We can go a little bigger and bolder," Kurtz said. "WEDC is kind of the expert on the manufacturing export piece. And so they've got a lot of markets, whereas in the past, in my very humble opinion, we haven't stressed a lot on our agricultural exports. You put those two together, and I think you're going to have a pretty powerful voice worldwide on exports."

Kurtz said agricultural exports suffered last year because of uncertain trade relationships between the U.S. and countries like China. But he's confident exports will pick up and Wisconsin can increase their share of the market.

Assembly Republicans also introduced four new bills, including one that would create a tax credit to offset property taxes on farm buildings and improvements.

Kurtz said the measure would be an immediate benefit to farmers struggling after five years of low commodity prices.

"If they've got a milk parlor or, like I have grain bins on my farm, you know, those are taxed at a certain rate. And so we can get that reduced to like an ag-based or an ag value tax and get that money right back into the farmer’s hands," Kurtz said.

Another proposed bill would let self-employed individuals deduct the cost of health insurance from their income tax.

The package also includes two bills aimed at the University of Wisconsin System. One would require the UW System to study the current problems facing farmers and evaluate how the university is helping support farmers through curriculum and staffing of agricultural programs. The other bill would require the UW System to develop an agricultural science and technology program.

Evers told reporters last week that he was glad Assembly Republicans were proposing additional bills to help farmers, saying he was "open to all sorts of ideas."

State Rep. Loren Oldenburg, R-Viroqua, said the shared interest to work on legislation for farmers is why Assembly Republicans introduced their own bills.

"There's 99 of us down there and we all got to kind of get on the same page to get something like this done because it is a lot of dollars," Oldenburg said. "When you're spending money, people have a lot of different ideas on how it actually goes."

Oldenburg said he's excited about a proposal brought forward by Evers to increase grants for dairy processing plants and require DATCP to give preference to small plants.

Tom Schaub is a dairy farmer and president of the Westby Cooperative Creamery. He said the processor grants and other proposals will bring immediate help to farmers still struggling from years of low prices.

"For some farms, it may be too late. But for others it's a good start. We appreciate the attention that agriculture, especially dairy, has been getting in the news lately to bring attention to the crisis that's been going on for five years now," Schaub said. 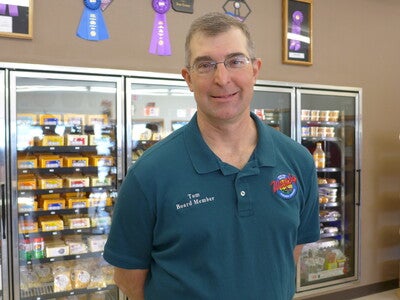 Tom Schaub, board president for Westby Cooperative Creamery, said increased grants for dairy processors and a proposed tax credit for farmers would help dairy farmers like him. Hope Kirwan/WPR

Adam Warthesen, director of government and industry affairs at Organic Valley, said his organization is also encouraged to see proposals from both sides of the aisle, including from the proposals from the Assembly task force on water quality. He's hopeful the shared attention will help lawmakers from both parties work together to pass the bills.

"We don't really care who's going to put their name on them. We see these pieces as good for agriculture and good for dairy and good for family farms," Warthesen said.

But Warthesen said the state's efforts are coming too late for many dairy farmers who have gone out of business in the last few years.

"We should be out in front and figuring out what's going to help agriculture earlier in every year," Warthesen said. "I'll take it when we get it. And there's attention on it now so let's push through the finish line."