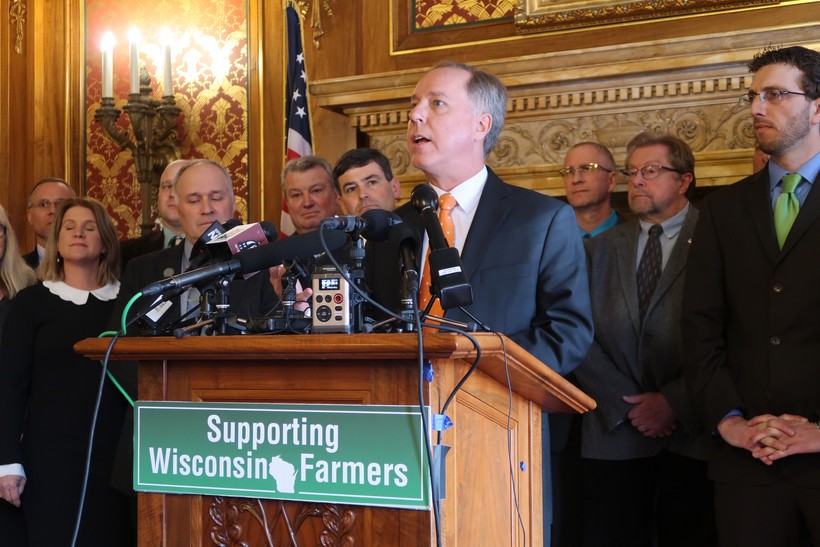 Assembly Speaker Robin Vos said Tuesday that GOP lawmakers will to introduce their own package of bills to help Wisconsin farmers, an announcement that comes less than two weeks after Democratic Gov. Tony Evers called for a special session to deal with the state's dairy crisis.

While Vos, R-Rocheter, said Assembly Republicans still needed to finalize specifics, he said it was likely to include tax breaks to help farmers pay for health care and reduce their property taxes.

"It will be significantly bigger than what Gov. Evers proposed," Vos told reporters at a state Capitol news conference Tuesday.

Vos said Assembly Republicans would be discussing how to reduce property taxes for farmers, who already pay lower property taxes than other landowners in Wisconsin.

He also said Republicans were considering a bill to let small farmers deduct the cost of health insurance in their taxes the same way larger farms and corporations do.

"It's just really a fairness issue," Vos said. "No matter how you choose to be organized, we should still have access to tax deductions to provide good quality health care."

Other ideas floated by Assembly Republicans include making a bigger push to increase agricultural exports, which is one of the goals that Evers laid out in his special session bills.

"I think he put a relatively small amount of money in, and I think this is an example where our caucus wants to go big and be bold," Vos said.

Assembly Republicans say they could also look at new ways to promote hemp in Wisconsin.

In addition to their own bills, Vos said Assembly Republicans would likely pass some variation of the agriculture bills proposed by Evers.

"Hopefully it will be a combination of both," Vos said.

"I'm open to all sorts of ideas, and I'm glad all sides now have decided to get going on this," Evers said.

Evers did not close the door on new agricultural tax breaks, but he cautioned that it takes time for people to feel the benefit of tax credits.

"That kind of money is always deferred and I think people need money now," Evers said. "But I'm open."

"Republicans in the Senate have said since the start that we’re all ears when it comes to plans that help farmers," said Senate Majority Leader Scott Fitzgerad, R-Juneau. "We’re taking an all-the-above approach as a caucus and are continuing to review all the bills in front of us as we look to address the special session call.”

Evers' introduced eight agriculture bills as part of his call for a special session. They would spend an estimated $8.5 million on a variety of state programs:

Lawmakers may not have much time to debate the bills. Vos has said previously that he wanted to adjourn for the year by the end of February, while Fitzgerald said the Senate would adjourn in March.