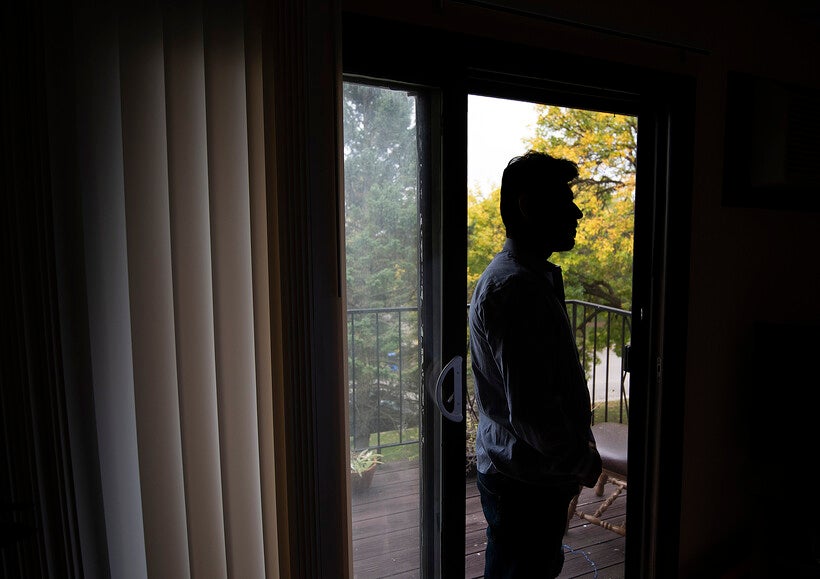 Former interpreter says getting family out of Afghanistan feels 'impossible'

With memories of experiencing the Taliban as a child, Madison-area resident says his family is living in hiding, without a clear way to leave the country
By Hope Kirwan
Share:

Johnny finally heard from his parents in Afghanistan after two weeks of not being able to reach them.

"Johnny 5" is the nickname U.S. Marines in Afghanistan gave him while he was working as an interpreter between 2010 and 2013. He came to the U.S. in 2014, and now lives in Fitchburg. WPR isn't using his real name to protect his family, who is still in Afghanistan.

"Their phone was off, and I was a little bit worried about them," Johnny said.

Johnny's parents, siblings and other immediate family members have been living in hiding in Kabul since the U.S. military withdrew from their country at the end of August. 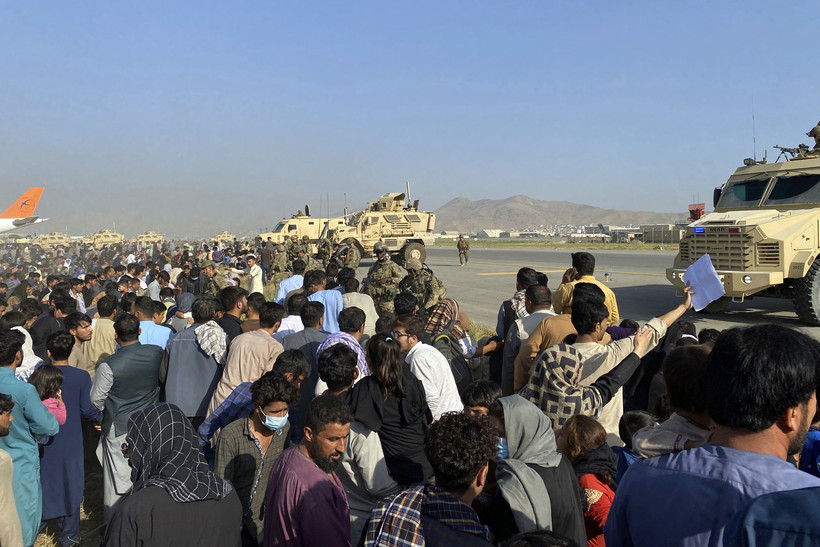 U.S soldiers stand guard along a perimeter at the international airport in Kabul, Afghanistan, Monday, Aug. 16, 2021. On Monday, the U.S. military and officials focus was on Kabul’s airport, where thousands of Afghans trapped by the sudden Taliban takeover rushed the tarmac and clung to U.S. military planes deployed to fly out staffers of the U.S. Embassy, which shut down Sunday, and others. Shekib Rahmani/AP Photo

Because Johnny and his brother both worked as interpreters, his family received approval from the U.S. State Department to be evacuated in the final days of the military withdrawal. But Johnny said his older parents and young sisters weren't able to make their way through the crowds that surrounded the airport. While two of his brothers made it on a flight out of the country, 13 of his family members were left behind.

Johnny said his family's home is about half an hour north of Kabul, but his parents decided to remain in the city and have been changing locations, staying with trusted family and friends.

"We grew up in a place where everybody knows us. Like our friends, our family, our relatives and the neighbors, the people we went to school with. It's the same people, it never changes,” Johnny said.

This close-knit community has turned into a threat for his family, who don't know which neighbors might tip off the Taliban of their connection to the U.S. military.

"You won't even know that somebody reported you. They just come at night and knock at your door and they just take you to an unknown location ... and they just disappear. That's it," Johnny said.

He said none of his family members are working right now and money is tight, especially because prices for everyday staples like oil and flour are more than double what they were before the Taliban takeover.

"They're saying that (Kabul) is not the same as it used to be. You know how it was crowded, how people were more happy and they were able to walk. It's not the same anymore," Johnny said. "All they see is that the Talibans are using the old government vehicles, they have their flags on them and they're searching for people."

Remembering his first encounters with the Taliban

Johnny said the fear and chaos that his family is currently experiencing reminds him of one of his first experiences with Taliban fighters as a child — during the Taliban's first takeover of Afghanistan in 1996.

He remembers his mom telling him and his siblings to stay home from school one day. Johnny, who was 5 or 6 years old at the time, said his father wasn't home and his mom kept peeking outside.

Eventually, a helicopter was shot down near their house, creating a deafening explosion. Johnny still remembers the sound and the fear his family felt. He said one of their neighbors came to check on them soon after. The man said Taliban fighters had already taken over his house nearby.

"A whole bunch of cars and stuff like that came, they had people with ammunition and everything. And we were so scared, we were like, 'What's going to happen now?'" Johnny remembered. 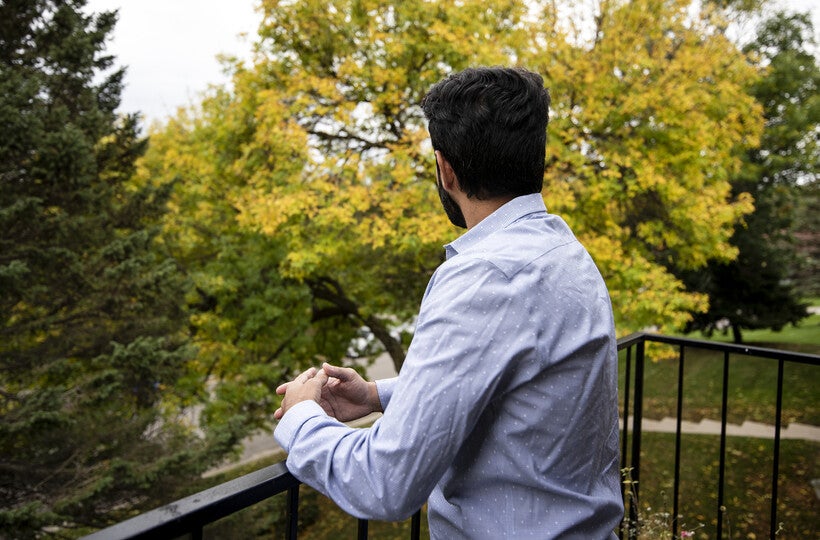 Johnny said the neighbor's father had been injured in the crossfire and a few Taliban soldiers had agreed to drive him to the closest clinic in Kabul. That's when Johnny's mom decided it was time for them to leave as well.

"She had a smart decision at the time. She was like, 'Oh, we should go too, because I'm sure they're going to take him somewhere there's no fighting going on,'" he said.

Johnny said they rode in the bed of the fighters' pickup truck down a main road into the capital. He remembers seeing bodies lining the sides of the road where fighting had taken place.

"I was watching the Taliban. They were stepping on their stomachs to see if they were still alive or not, to check on them," Johnny said. "Those are the moments I will never forget. That's how I picture the Taliban."

He said his family returned to their house later and found it burned to the ground. He thinks Taliban fighters found his parents' TV, a luxury in his neighborhood at that time, but one that was frowned upon by the armed Islamist group known for its strict cultural rules.

Now, 25 years later and thousands of miles away from his parents and siblings, Johnny said he keeps wondering what his 7-year-old sister is experiencing with this new era of Taliban fighters, and if his family will somehow manage to flee the violence for good.

Johnny is a full-time college student. But any spare moments he's had in recent weeks have been spent trying to call the U.S. State Department or the offices of Wisconsin's congressional delegation to ask for help getting his family out of Afghanistan.

He said the directions he's received from federal officials so far seem impossible to follow.

"All they tell me is take out your family to a different country, which is impossible for me," Johnny said. "(My family's) passports were thrown away while they were trying to get through the crowd and go to the airport. So they were stopped at a Taliban checkpoint and their passport has been thrown away ... How are they going to leave a country, how are they going to go to a different country if they don't have a passport, how is that even possible?"

A State Department spokesperson said in an email that "all Afghans eligible and referred to the (U.S. Refugee Admissions Program) must be outside of Afghanistan in a third country for their cases to be processed.

"We recognize that it is extremely difficult for Afghans to get to a third country," the spokesperson said in the email. "We continue to call for safe passage for all those who wish to leave Afghanistan and we have been very public about advocacy to other countries to respect the principle of non-refoulement and to allow entry for Afghans seeking protection."

Johnny said passport offices in Kabul recently reopened, but the same crowd that once surrounded the airport is now crowding the office. Like the U.S., Johnny said many Afghans don't have a passport and never expected to be trying to flee their country.

But even more concerning than the crowd is the fact that going to a government office makes his family known to the very people they're trying to hide from.

"I tell them, 'Don't even bother because right now, they don't even know where you live. But if you go there and somebody recognizes you ... that's going to be an easier capture,'" Johnny said. 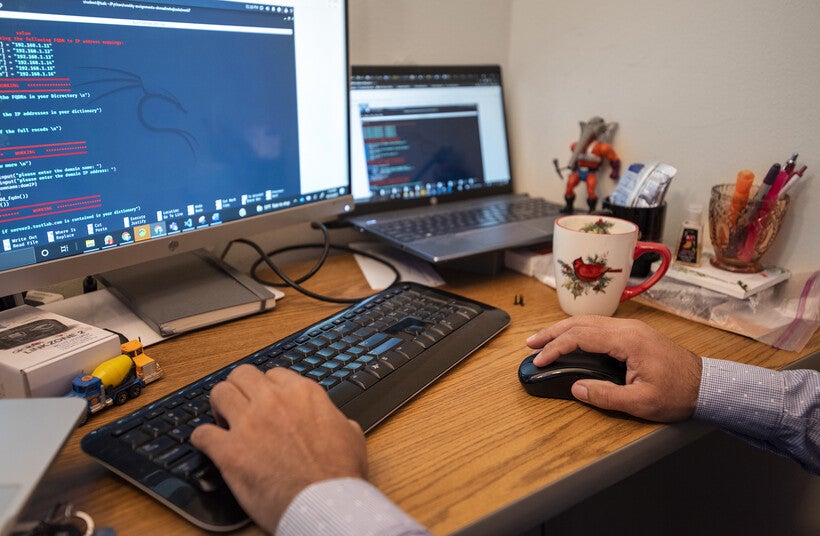 Johnny works on homework from one of his college classes Friday, Oct. 15, 2021, at his apartment in Fitchburg, Wis. Angela Major/WPR

Zac Lois is a former member of the U.S. Army Special Forces and was raised in Burlington. He now works as an eighth-grade social studies teacher in upstate New York. But for the last two months, he's been helping Task Force Pineapple, a group of veterans from across the country, to evacuate Afghans who have connections to the U.S., like Johnny's family.

"Most of these individuals are people we know personally. These are former combat interpreters of ours. These are former Afghan special forces and commandos that we served alongside with in Afghanistan," Lois said.

Lois said Johnny's concerns about the safety of applying for a passport are justified. His group has heard reports of individuals going in to apply for documents and being arrested instead.

He said it is "highly unlikely" that people considered high value targets by the Taliban would be able to leave Afghanistan on their own. Lois said the Taliban controls the airports so anyone leaving by plane has to go through what he calls "Taliban TSA." His group has also heard reports that the Taliban have gained access to U.S. biometric systems left behind in the evacuation and has been using it to verify whether someone is a target.

"(The people we're helping) can't work, so the funding is a major issue. They're being hunted so they need any kind of support they can get to be given intelligence and early warning and a safe house," Lois said. "But just also navigating the process. We spend 20 hours a day at this and we still don't always have a good grasp of what is the (immigration) process."

He said the task force has been instructed to only evacuate people with U.S. citizenship, permanent residency or a finalized Special Immigrant Visa, or SIV, a specific program for Afghans who aided the U.S. military. That excludes many people who applied for a visa this summer in the hopes of being evacuated.

Working with other veteran groups, the task force has put together a list of 100,000 people that they believe are eligible for evacuation.

A State Department spokesperson said in an email the agency is working on a case-by-case basis to assist U.S. citizens and their immediate families with leaving Afghanistan. They said as space becomes available, they will also facilitate departures for legal permanent residents and SIV holders. But the agency is "not providing support for expedited departure or resettlement in the United States for extended family members of U.S. citizens."

Lois said it could take years to help all of the people affected by the U.S. withdrawal. But Johnny said his family and friends who also worked as interpreters are hoping to find a more immediate way out of the country.

After 40 years of conflict in his homeland, Johnny said all he wants is peace for the people of Afghanistan, whether that's under the previous government or Taliban control. But he has been disheartened by news of continued explosions and violence in the capital.

"If peace is not coming, then I want my family to be evacuated somewhere. As a U.S. citizen, I think I do have a right to ask the U.S. government (for help)," Johnny said. "It's not like we didn't work for this country. I did serve and I did work. I worked hard in a really dangerous place ... That life doesn't mean anything to me if they die. All I want is just someone to help me out, to evacuate my family."