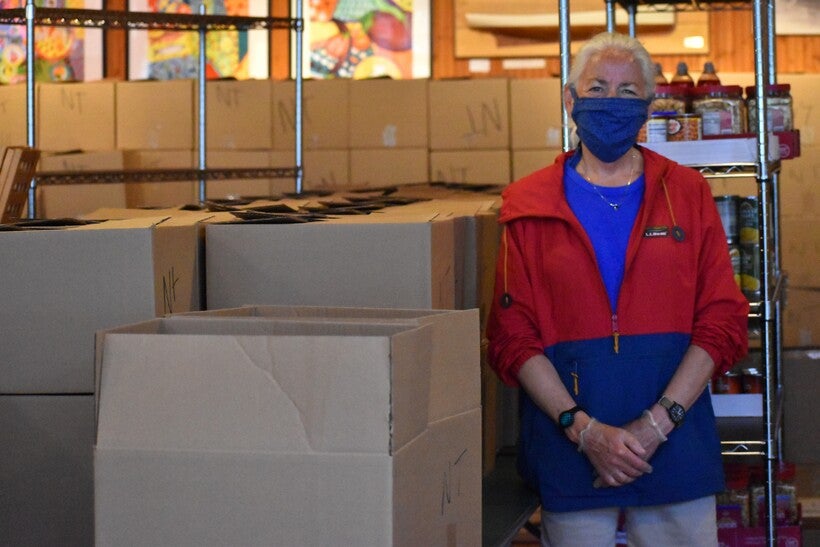 Food pantry volunteer Lisa Luttinen of Washburn helps run food boxes out to people who need it on Thursday, May 28, 2020. Danielle Kaeding/WPR

'Food Is Always Last On My List': Pantries Pivot To Meet Demand During Coronavirus Pandemic

Broad Street in Bayfield is relatively quiet except for the cars that stop in at the local food pantry. There are no long lines in the small tourist haven by Lake Superior. Nevertheless, the need for food has drawn out families, seniors and those who are out of work as a result of the COVID-19 crisis.

Vicki Graff is among those stopping by for the first time.

"I always felt like people who needed it even more than me, but they keep encouraging me to come," said Graff.

Graff was working for the local chamber of commerce, but it reduced staff due to the pandemic. She hasn't heard whether her job will be brought back so she's pursuing other options.

"It hasn't been really, really bad," she said. "With the stimulus money and unemployment, it's been manageable."

More than 440,000 people in Wisconsin lost their jobs in April. With no money coming in, many found themselves visiting food pantries for the first time. As demand for food spiked, food banks and pantries across the state have made changes to meet the need while the nation has witnessed disruptions in the supply chain.

Mary Dougherty, executive director of CORE Community Resources, has been helping run Bayfield's food pantry after it expanded service to include the Red Cliff reservation during the pandemic. She said around 700 people in the area used the food shelf from March 26 through the end of April. The rural northern Wisconsin city is home to around 500 people year-round.

The COVID-19 crisis — and the food insecurity that has come with it — has transformed their operations.

"How the food pantry normally operated was like a grocery store where people would come in and pick what they want off the shelf," said Dougherty. "But we can't do that with social distancing."

Now, people pull up in their vehicles outside the food pantry. Volunteers decked out in gloves and masks run food boxes out to them, including Lisa Luttinen of Washburn. The retiree signed up to help because she wanted to be of service and the interactions are distant enough that she isn't worried about the virus.

"If this is what gets me sick ... I'm willing to live with that consequence," she said. 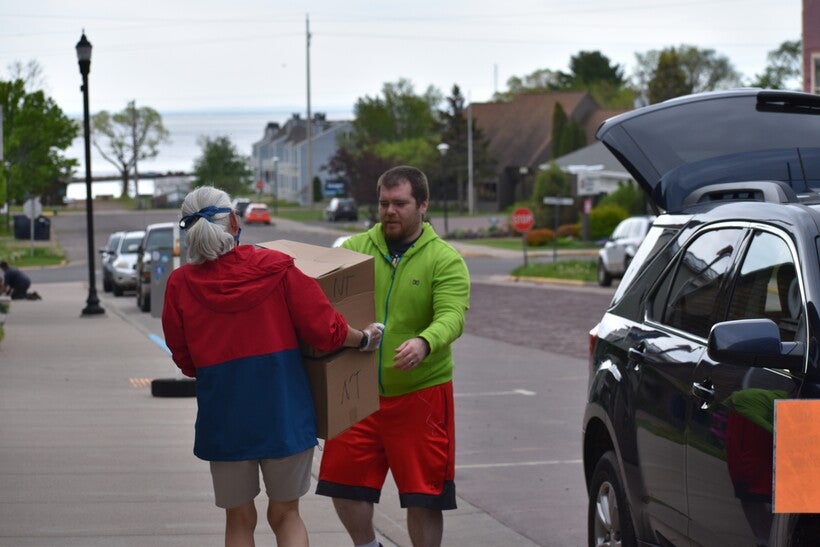 Volunteer Lisa Luttinen brings food boxes out to Charles DeFoe at the Bayfield Food Pantry on May 28, 2020. Danielle Kaeding/WPR

"My bills have to get paid first," she said. "Food is always last on my list."

The pandemic has changed far more than how the pantry provides food to those in need. It's also changed what they're getting and how they store it. For example, the Red Cliff Band of Lake Superior Chippewa donated more than 300 pounds of whitefish from tribal fishers to the surrounding area, including the Bayfield food pantry.

"In trying times such as these, it is imperative that we all not only take care of ourselves, but also one another," said Red Cliff Tribal Chairman Rick Peterson in a newsletter.

Yet, Bayfield's Dougherty said they've also had to turn down a tractor-trailer load of food from the USDA Farmers to Families Food Box program that partners with farmers, distributors and non-profits to connect families with food during the pandemic.

Smaller pantries have experienced challenges accepting food through the program, according to Sherrie Tussler, executive director of the Hunger Task Force. The anti-hunger organization has been helping to get food to groups that are distributing those boxes.

"If you're a little guy in a rural community and you don't have a giant cooler or access to one, it's hard for you to accept that level of food," said Tussler.

Bayfield's food pantry also had to get creative when receiving bulk quantities of food from other sources, including the Wisconsin Dairy Recovery Program. The program pays Wisconsin dairy farmers to supply milk that is processed and distributed to food banks and pantries.

Dougherty reached out to community partners to store that food, including Danny Simpson, assistant manager of the Hulings Rice Food Center at Northland College in Ashland. The center stored food for Bayfield's pantry and repackaged donations from local businesses that shut down during the stay-at-home order for the food shelf run by The BRICK Ministries in Ashland. 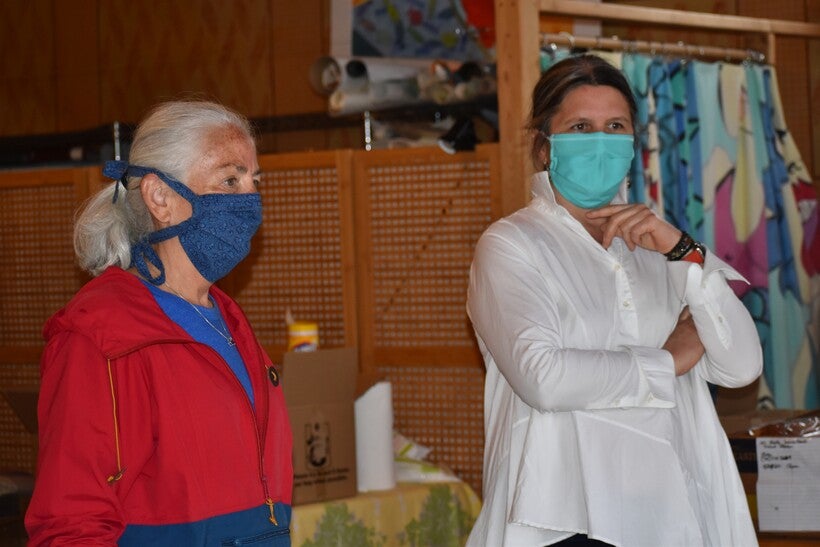 Mary Dougherty (right) has been helping run Bayfield's food pantry after it expanded service to include the Red Cliff reservation during the pandemic. Danielle Kaeding/WPR

"Restaurants, because of their volume and the amount of food that they're kicking out, don't receive those smaller, nice packaged quantities," said Simpson.

"When we all started this pandemic, our donations from them did not decrease. However, it has taken a toll now," said Calaway. "They are starting to decrease just the amount that we receive, especially the meats and the produce."

To fill in the gaps, Calaway said they've partnered with local sources like Tetzner's Dairy, a family-owned dairy farm in Washburn. Pete Tetzner works with his family on the farm, which processes around one-third of the milk produced by their 60-cow dairy. Tetzner said they're also providing around 25 gallons a week to Bayfield's pantry.

"It's good for us to be able to sell a little bit more milk and than just keeping that milk local," said Tetzner. 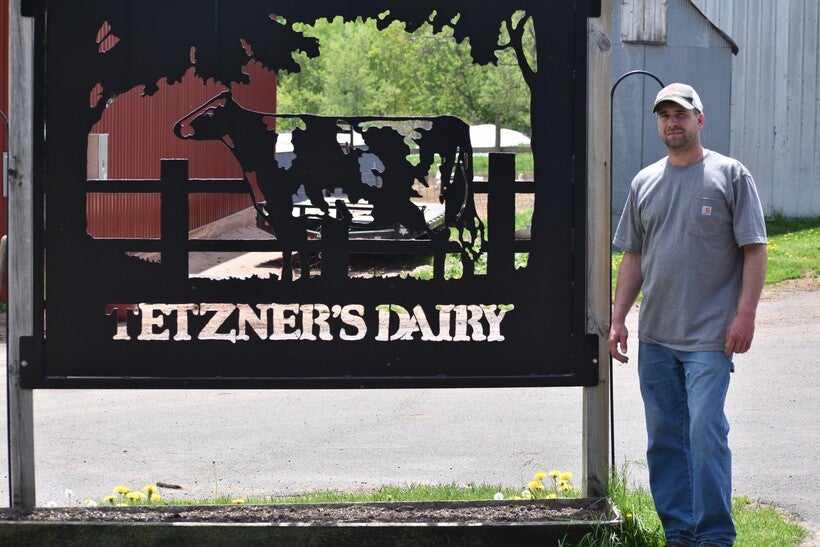 Pete Tetzner works with his family at Tetzner's Dairy in Washburn, which provides milk to food pantries in the Chequamegon Bay area. Danielle Kaeding/WPR

The more he processes locally, the better for the farm as milk prices have dropped from earlier this year due to the pandemic. Tetzner said he's also had to pay more to ship milk.

Jenise Swartley said Bayfield's food pantry is responding to a broken food system. She helped coordinate its volunteers as part of the local network Chequamegon Bay Community Care, which formed to assist with coronavirus response.

"We also need to think about how we can transform our local food systems to get at the root causes of why not everyone has access to food," said Swartley.

Food banks that help support access have been grappling with issues that include changes in the supply chain, according to Shaye Moris, executive director of Second Harvest Northern Lakes Food Bank in Duluth, Minnesota. She said they began purchasing product when food from area grocers declined after people rushed to stock up on supplies in March.

"We will go with major manufacturers nationally and secure a truckload of something or multiple products. But that comes at a higher cost for us," said Moris.

In two months, Moris said they bought more than $355,000 worth of food — about a 65-percent increase from the same time last year. At the same time, more than 17,000 people visited the food shelves they serve in March, closing in on levels not seen since the Great Recession.

Wisconsin's FoodShare program that provides money to families for buying food has also seen a spike in people seeking assistance. FoodShare director Rebecca McAtee said more than 15,000 applications were filed in one week during April when demand was at its peak. She said those numbers have since come down as unemployment payments have started to come through.

"Generally, if the economy is kind of picking back up and opening back up, that might also have an impact on whether people are continuing to apply," said McAtee.

The number of people who are uncertain where their next meal is coming from is likely beyond anything seen in recent history, according to Judi Bartfeld, food security research and policy specialist with the Division of Extension at the University of Wisconsin-Madison. 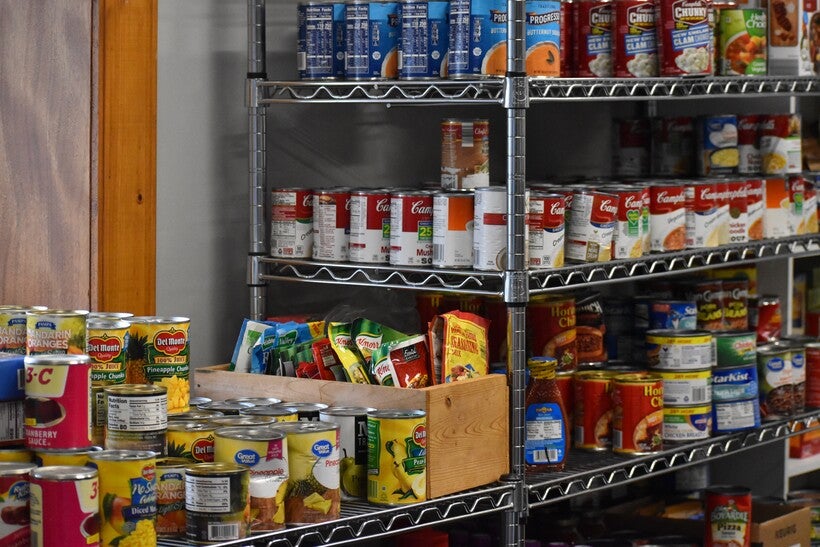 Canned foods line shelves at the Bayfield Food Pantry, which has had to transform operations during the coronavirus pandemic. Danielle Kaeding/WPR

Prior to the pandemic, about one in 10 households in Wisconsin were food insecure. She said the COVID-19 crisis has created the biggest disruption in food access since the Great Recession because it's impacted people's income, school meals, federal food safety nets and the retail sector.

Bartfeld said bolstering things like food and unemployment benefits, as well as improving access to them, could play a large role in cushioning the impact of coronavirus over time.

Some steps have been taken to boost access to food during the pandemic. The Wisconsin Department of Health Services announced this week that more households would be able to get food through pantries that take part in the Emergency Food Assistance Program (TEFAP) as of June 1.

For Graff, she thinks pantries like Bayfield are going to be even more important as time goes on, especially if the nation sees another wave of coronavirus cases this fall.