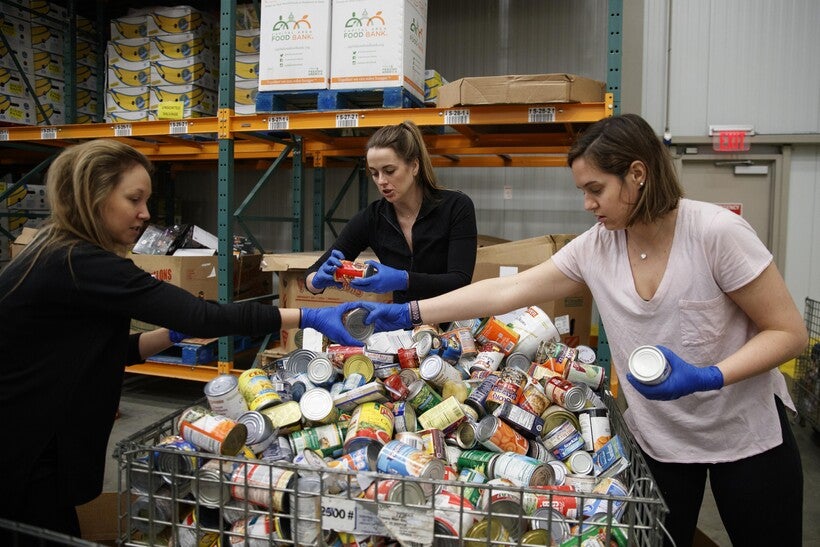 As more Wisconsinites lose jobs or have their hours cut back amid the coronavirus, many are turning to the state and to local nonprofits for help putting food on the table.

Applications for FoodShare, the state Department of Health Services-administered program that provides families with money for groceries, has seen applications jump by about 5,000 per week — more than double the usual amount — over the last several weeks.

Rebecca McAtee, who helps administer the program for DHS, said it can take up to 30 days to confirm eligibility and get applicants enrolled in the program, so the difference in how many more people actually receive FoodShare won’t show up in the department’s data until their April or May numbers come in.

Once Wisconsinites are approved for Foodshare, they receive a debit card that’s reloaded once a month, with the actual date staggered based on the last digit of the recipient’s social security number.

Under the recently passed federal relief package, people who are eligible for FoodShare in March and April and are not already receiving the maximum benefit for their household size will have additional money loaded onto their cards up to that maximum. For example, someone receiving the minimum FoodShare benefit for a single person, $15, in March, would have had an additional $179 added to their card April 12, to bring them up to the single-person maximum of $194. The April increase will be loaded to most cards Sunday.

"Because eligibility is reviewed continuously, there may be some approved after (the first payments go out)," McAtee noted. "We’ll be doing some catch-up runs in May for any who are later determined eligible (for the additional money) in March or April."

The state has also waived work requirements for people receiving FoodShare. At the federal level, more stringent work rules that had been set to roll out in April were delayed.

To find out if you're eligible for FoodShare, visit https://access.wisconsin.gov/access/.

The state’s network of food banks are also being stretched thin by growing demand, even as they’re having to overhaul how they sort and distribute food to minimize the chances for COVID-19 to spread.

At the Milwaukee-based Hunger Task Force, director Sherrie Tussler said they saw an "unprecedented" 60 percent increase in demand from the second week of March to the first week of April. At the same time, some of the all-volunteer pantries they deliver food to around the city have had to shut their doors, as most of their volunteers are in the over-65 high-risk pool.

Kris Tazelaar, director of communications at Second Harvest Foodbank of Southern Wisconsin, described it as a "corona storm."

"The COVID-19 pandemic has essentially made us completely change everything that we do," he said.

The "storm," he said, comes from several things happening at once: a tremendous surge in need; a drastic decline in the availability of donated food and an overall jump in the cost of doing business as they have to pay for more staff to cover the work of the dwindling number of volunteers; more supplies like boxes and packaging materials as they switch to giving people pre-packed boxes of food; and more food purchasing to make up for the drop in donations.

Tazelaar said Second Harvest has been essentially competing for a limited amount of food, as food banks around the country are seeing similar spikes in demand and grocery stores are also trying to refill empty shelves.

"Everybody’s reaching into the same bucket of potential food providers," he said. "There’s a finite amount of product that’s available, so it does make it very challenging."

Tussler said Hunger Task Force has been using a bump in donations to help bring in more food when they can, but that supply has been tricky for them, too.

"It’s near impossible to buy a truckload of any kind of product," she said. "We’re now competing with grocery stores, and so the prices increase, things don’t come on time — if they come at all."

In addition, the closure of Smithfield’s meat processing plant in Sioux Falls, South Dakota, after hundreds of workers tested positive has meant a hit to the national meat supply — and Tazelaar said he’s worried Smithfield will be just the first manufacturer to have to reduce or completely stop production because of the virus.

Tussler and Hunger Task Force have been directing as many people as they can to FoodShare, so they can use local grocery stores to buy what they need.

Second Harvest has been sending out twice as many pounds of food as it would in a typical March or April — up to 90,000 pounds a day, up from 40,000 to 45,000. To get that amount of food ready, Tazelaar said they’ve been spending about $225,000 more per week than they’d budgeted — and he expects that amount to go up as more people feel the economic effects of COVID-19 closures.

"I can’t overstate how grateful we are for everyone financially who has contributed to us," Tazelaar said, "but our reality is that pretty quickly, our expenses are going to start to outpace our financial donations."