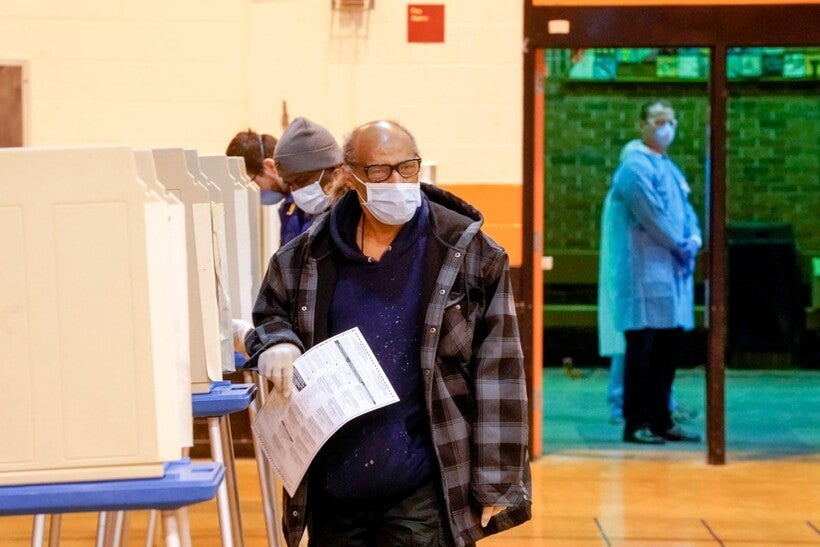 A new federal lawsuit aims to force the state to mail absentee ballot request forms to all registered voters, arguing that step among several others could prevent a repeat of Wisconsin's April pandemic election that "shook the public's faith in the democratic process."

The lawsuit argues the April 7 election was unlike any in state history, taking place two days after the Surgeon General of the United States likened the new coronavirus to the Pearl Harbor and Sept.11, 2001, attacks. Even as other states delayed their in-person elections, Wisconsin forged ahead with in-person voting despite public health warnings to avoid large crowds.

"As a result, voters were forced to choose between forgoing their constitutional rights to participate in their democracy or risking the health of themselves and their loved ones in order to vote. Tens of thousands of voters were disenfranchised by failures in the absentee and in-person voting systems," argues the lawsuit. "Plaintiffs bring this case to prevent a replay of this mass disenfranchisement in either the August Partisan Primary or the November General Election."

The lead-up to the election was marked by a dizzying legal battle. Days before the election, a federal judge ruled that people could cast mail-in absentee ballots without a witness signature only to have his ruling overturned by the Seventh Circuit Court of Appeals in Chicago. And on the eve of the election, Gov. Tony Evers tried to postpone in-person voting only to have his order rejected by the Wisconsin Supreme Court.

Once the election happened, the experience of voting varied widely across the state. In Milwaukee and Green Bay, voters stood in line for hours to cast ballots after polling locations there were drastically reduced, while elsewhere, the experience took minutes.

Likewise, people who voted absentee also had dramatically different experiences. Nearly 1.2 million people, or about 75 percent of all voters, cast absentee ballots. The vast majority of those ballots — about 964,000 — were cast by mail according to the Wisconsin Elections Commission, which is by far the largest number of mail-in ballots ever cast for a Wisconsin election.

At the same time, about 121,000 ballots were sent to voters but never returned according to the WEC. Many voters reported asking for ballots and never receiving them. Clerks said they were stretched to the limit, and there were signs that in some cases, the postal system might have been overwhelmed.

Also, according to a report released by the WEC Monday, roughly 14,000 ballots were rejected because they failed a witness certification requirement. Under Wisconsin's voter ID law, absentee ballots must be accompanied by a witness signature, a requirement many voters complained was impossible to fulfill at a time when they were socially isolating.

Among the plaintiffs bringing the federal lawsuit is Appleton voter Jill Swanson, 61, who has early stage chronic obstructive pulmonary disease. She said she was unable to vote in person because of the risk to her physical health and safety represented by the COVID-19 pandemic.

The plaintiffs also include Maria Nelson, a breast cancer patient from Appleton who didn't feel safe voting in person. According to the complaint, Nelson asked for an absentee ballot but never received one, leaving her unable to vote.

Other plaintiffs include Melody McCurtis, an African American voter from Milwaukee who said she requested an absentee ballot but never received one, leading her to stand in line for two hours to vote.

The case is also being brought by Black Leaders Organizing for Communities and Disability Rights Wisconsin, two groups who argue their members have been disproportionately hurt by the state's decision to move ahead with the April 7 election during the pandemic.

They argue that the Wisconsin Elections Commission, "by failing to take appropriate actions to ensure that Wisconsinites can safely access the ballot," violated the federal Voting Rights Act, the First and 14th Amendments to the U.S. Constitution and the Americans with Disabilities Act.

"Defendants failed to take available steps necessary to allow voters to vote safely, either in person or by the absentee voting procedures provided by Wisconsin law," wrote their lawsuit. "And, despite the reports of substantial voter disenfranchisement, they have not taken sufficient steps to remedy those failures in advance of the coming elections."

They're asking for a federal court order requiring the Wisconsin Elections Commission to mail absentee ballot request forms to all voters and to loosen enforcement of the state's witness signature requirement for absentee ballots.

Some of the lawsuit's demands are far more broad. For example, it asks the court to force the state to "take all appropriate actions to ensure that in-person voting, whether exercised by casting an absentee ballot or by casting a ballot on election day, can be safely conducted."

The WEC didn't respond to a request for comment on the lawsuit, citing its longstanding policy of not commenting on pending litigation.

However, there is a chance that plaintiffs in this case will get some of what they want from the commission, even without the help of a federal judge.

Staff at the agency prepared a memo for Wednesday's meeting of the commission suggesting that the state spend $2.1 million in federal CARES Act funding to mail an absentee ballot request form to 2.7 million registered voters in the state in time for the November election.

Spokespeople for Assembly Speaker Robin Vos, R-Rochester, and state Senate Majority Leader Scott Fitzgerald, R-Juneau, who have hired their own attorneys to intervene in recent election-related lawsuits, didn't respond to a question about whether they would get involved in this case.

"If there was one thing we learned from April, it’s that holding an election during a viral pandemic comes with its fair share of challenges," they wrote in an email to all members of the state Legislature. "If we don’t do anything before November, we will likely run into even more issues."

Their bill would let the WEC send absentee ballot forms and waive witness signature requirements if the governor declares a state of emergency.

Representatives for Vos and Fitzgerald didn't respond to a request for comment on the bill. The Legislature isn't scheduled to reconvene for the remainder of 2020.