Wisconsin voters requested a record 1.28 million absentee ballots, many of them seeking to avoid in-person voting during the coronavirus pandemic.

But news outlets have found numerous voters in Madison, Milwaukee, Appleton and elsewhere who said they waited to receive ballots that didn't arrive before Election Day. The Milwaukee Journal Sentinel reported at least 50 people contacted the newspaper to report problems accessing mail-in ballots.

Some of those voters chose to risk infection and vote in person. Others didn't vote.

State Sen. Dan Feyen, R-Fond du Lac, tweeted Wednesday he had been informed of a call from a postal worker to the Wisconsin Elections Commission reporting that "3 large tubs of absentee ballots from Oshkosh and Appleton were just located." Feyen said he was "working hard to remedy the situation."

State Rep. Gordon Hintz, D-Oshkosh, urged the Wisconsin Elections Commission and the state Department of Justice to investigate the waylaid ballots, which he said were found in a mail processing facility in Milwaukee. He also called on the Legislature to implement mail-only balloting for upcoming elections if the pandemic continues.

Controversy over absentee balloting in this election made it all the way up to the U.S. Supreme Court. A federal court judge had extended the date for Wisconsin voters to send in ballots to Monday, April 13 — citing the high number of absentee ballot requests and the ongoing pandemic. But the high court reversed that hours before the election, ordering that ballots had to be postmarked by Tuesday to be counted.

Elections Commission administrator Meagan Wolfe said Wednesday the agency heard from several clerks that absentee ballots they had mailed out were "bounced back."

Wolfe said state elections officials have been in contact with the postal service to determine the scope of the problem.

"I don’t know that we have a good handle on that yet," she said. 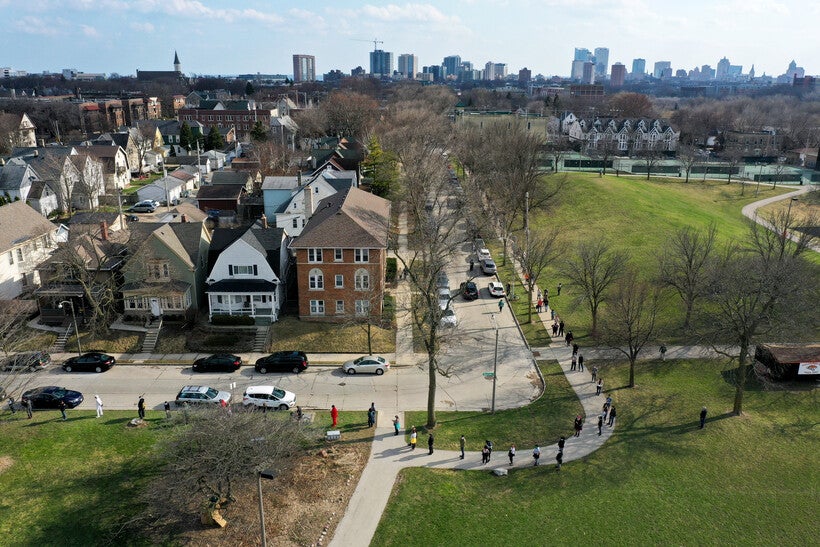 The line of voters outside the polling location at Riverside University High School in Milwaukee stretched around the block, through a city park and into a neighborhood Tuesday, April 7, 2020. Coburn Dukehart/Wisconsin Watch

'They Just Never Got Mailed'

Scott Botcher, Fox Point village manager, said his staff worked hard to quickly send ballots to all 2,877 residents who requested them. But something strange happened ahead of Election Day: USPS repeatedly returned unsent ballots without explanation.

"The ballots are not stamped 'undeliverable' or anything. They just never got mailed," Botcher told PBS Wisconsin, which broke the story of the undelivered ballots.

Most of the returned ballots were meant for Fox Point voters, but about seven to 10 per day were intended for voters in neighboring Glendale, he said. A smaller share was meant for voters in nearby Whitefish Bay.

Botcher said he didn't know how many ballots the village re-sent over that period, nor how many never reached voters. But on Election Day — the deadline for voters to postmark their ballots — he received a white plastic bin filled with 175 ballots local voters never received.

"I don't think it's anything nefarious on the part of the Postal Service, but something just wasn’t working right," he said.

Problem All Over State

Molly Collins, advocacy director for the ACLU of Wisconsin, said the group has heard from "tons of voters in many parts of the state" who did not receive absentee ballots they had requested.

Collins was in Milwaukee on Tuesday observing the election as thousands of voters — many wearing face masks for safety — waited in long lines at the city’s five polling sites to cast in-person ballots.

"I can say from being inside polling places with Election Protection yesterday that I heard so many Milwaukee voters come with that question: 'I requested a ballot, it never came, so I need to be here to vote,'" Collins said, calling the situation "very frustrating."

Neil Albrecht, executive director of the Milwaukee Election Commission, said delivery delays created an "unlevel playing field" for voters who tried to vote absentee. He said because of worker shortages, postal officials told him it could take seven to 10 days to deliver a ballot.

Albrecht said the city heard from an "extraordinary number" of voters on March 22 and 23 who reported to the Election Commission they had not received their ballots. He said he is documenting the problem and plans to report it to the postal service.

Since this election was so reliant on mail-in ballots, "many voters were just disenfranchised by waiting for absentee ballots to arrive in the mail," Albrecht said.

Bob Sheehan, spokesperson for the USPS region serving most of Wisconsin, said the postal service is aware of the problems with the Fox Point ballots. But he had no information to share Wednesday.

"People are investigating it," Sheehan said, adding that local and district administrators were leading the probe.

Sheehan said he knew of no other complaints like those in Fox Point.

"Not like this — that’s for sure. We’ve heard scattered reports of people not getting their ballots," Sheehan said. "There were just things that I heard on the news. Nobody contacted the Postal Service directly."

Botcher said he and Pedersen took the returned, unopened ballots back to their branch post office seeking an explanation and got none. Village officials asked them to be redelivered — and some were returned to the sender, the village of Fox Point — more than once, Botcher said. 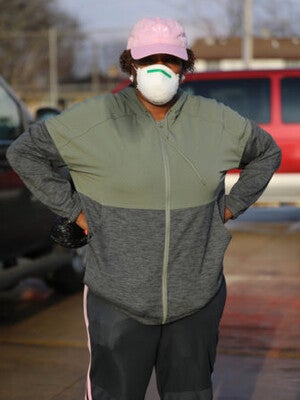 Bobbie Perkins, 53, waits in line to vote outside the polling site at Marshall High School in Milwaukee on April 7, 2020. She says she requested an absentee ballot that never arrived. Coburn Dukehart/Wisconsin Watch

Bobbie Perkins, of Milwaukee, is one of the voters who did not receive her ballot. She said she was afraid to risk in-person voting because of reports that African Americans were contracting coronavirus at high rates. But she went to the polling site at Marshall High School on Tuesday anyway.

"I didn’t care where I had to go, I was going to vote today,” Perkins said. “I think it (the election) should have been postponed because of what’s going on out here. If they say the black community is dying (of coronavirus), why would they put us in a group like this?”

Larry Borth voted Tuesday at Milwaukee’s Marshall High School. He said he requested an absentee ballot that never arrived, even though he could see online that it was sent March 23.

Tim Lochner, of Yuba in Richland County, said he and his wife both requested absentee ballots. She got one — but he didn't. He called a town official in charge of absentee ballots, and she hand-delivered the ballot to their home the night before the election.

Josh Jandrain, from the village of Plover in Portage County, shared a website screenshot indicating that his ballot was mailed March 24 — but he never got it.

"I ended up risking it today and went to the polls," he said Tuesday. "I’m so angry about how this went down."

Tristain Thomas, a logistics technician from Appleton, wore a face mask to vote Tuesday after his absentee ballot did not arrive. It finally did come — the day after the election.

This story was reported by Dee J. Hall and Jim Malewitz of Wisconsin Watch; Frederica Freyberg and Will Kenneally of PBS Wisconsin and Shawn Johnson of Wisconsin Public Radio. The nonprofit Wisconsin Watch (wisconsinwatch.org) collaborates with WPR, PBS Wisconsin, other news media and the UW-Madison School of Journalism and Mass Communication. All works created, published, posted or disseminated by Wisconsin Watch do not necessarily reflect the views or opinions of UW-Madison or any of its affiliates.