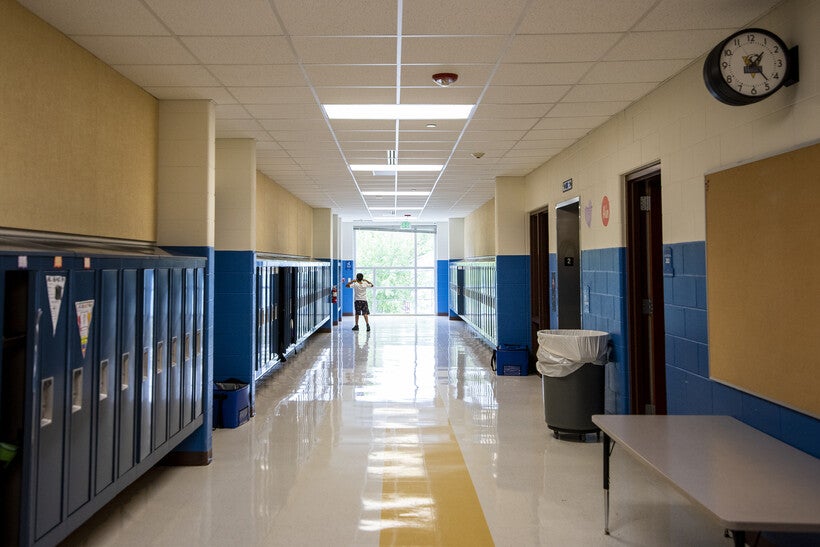 Staring at stagnant revenue and declining enrollment, many Wisconsin school districts are reducing their number of teaching and support staff positions. These steps are leading, in some cases, to larger class sizes and the loss of some programs.

"Those districts that are poorer find themselves reducing programs," said Bales. "Generally, you try to keep those reductions as far from the students as you can. So, they'll try to find all kinds of other ways to try to reduce first."

Still, school districts' single biggest expense is nearly always the people they employ. As a result, when a school district needs to cut expenses, there are only so many options they can try before looking at staff.

Federal pandemic relief has offered a one-time infusion of cash to schools across the country, but schools are reluctant to use it for staff because when it runs out, they have to continue covering employees' pay and benefits out of their own budget.

"Any long-lasting positions that are added, there needs to be a funding mechanism for those positions outside of the (Elementary and Secondary Education Emergency Relief) funds," said Richard Dahman, superintendent of the Milton School District. "We know that when those ESSER funds run out, we and the rest of the state are kind of looking at a fiscal cliff, where if the Legislature doesn't increase the revenue cap for coming years, we know that we're going to continue to have to look at ways to make reductions."

Milton is cutting several positions, as is the neighboring Janesville school district. Dahman said the staff reductions aren't a result of pandemic declines in enrollment as Milton actually saw an enrollment increase in fall 2020, but of longer-term population declines that means the district is expecting to enroll about 80 fewer children in its kindergarten class than are leaving its outgoing senior class.

"Everyone would like us to have as small of class sizes as possible and keep people employed — our school district is one of the largest employers in our area. But, we also know that we have a responsibility to our taxpayers to ensure that we're staffing our schools in an efficient manner," said Dahman. "We work hard to balance those two things."

Bales said school districts that need to shrink their personnel often prefer to not fill openings when staff members resign or retire rather than eliminate jobs that still have teachers or support staff in them. Milton is doing that, by eliminating vacant jobs. Dahman said it shouldn't affect class sizes at the elementary level since they're eliminating two sections and are enrolling about two fewer sections of students, but it might mean larger English and science sections at the high school.

Michael Jones, head of the union Madison Teachers Inc., said losing staff and shifting higher class loads onto the remaining teachers and support staff takes a toll, especially in the loss of prep periods and meal periods when a lot of planning and documentation gets done.

"All of that amounts to just a huge emotional drain and huge emotional 'I can’t do this, I don't have the emotional capacity,'" he said. "Everyone needs that downtime, otherwise you burn out so quickly. It becomes a mental and physical health crisis."

The Madison Metropolitan School District is currently planning on reductions to support staff and not classroom teachers, but Jones said that still means fewer hands to help with students, as well as paperwork and student health needs.

Bales said he has seen an increase in school districts cutting staff over the past few years although he said it's usually less to do with pandemic-related enrollment reductions and more to do with population declines and costs. The most recent state budget didn't raise school revenue limits, which is the amount schools can take in through a combination of state aid and local taxes, even as costs have increased.

"We're anticipating a less than 1 percent increase in our revenue in the coming year, and we know that there are a lot of fixed costs that are going to go up," said Dahman, "The same inflationary pressures that people are seeing in their household budgets, we're also seeing in our school district budget."

Bales said staffing reductions and other cost-saving measures fall heavier on areas with a smaller tax base, smaller population and other situations that make raising money locally more difficult. School districts can increase their income from local property taxes through a referendum vote, as an increasing number have done in recent years.

"If I'm in a reasonably economically stable referendum community, I might be able to pass that referendum," he said. "If I'm in a declining enrollment, rural community, it's not likely I'll be able to do that, since a large segment of the population literally can't afford it, so the inequities grow."

Even in school districts that aren't cutting staff, there are concerns that not increasing their wages to account for inflation while so many other industries are upping salaries mean some of the best teachers might look elsewhere.

"We had an (education assistant, or EA) who was working with a student on job skills with a student who had a job at Wal-Mart, and the student at the Wal-Mart job was getting paid more than the EA who was supporting them, per hour," said Jones. "When you have a situation like that, that obviously sends a huge message to the EA that your work isn't valued."

Jones warned that this, in turn, might result in a reduction in education quality that will prompt enrollment declines as well, starting the whole cycle over.

"Budgets are documents that communicate things beyond numbers or money. They communicate, 'This is how much I value your labor,'" he said. "We are going to both lose face and lose money if enrollment declines because we aren’t putting that emphasis on staffing and support."