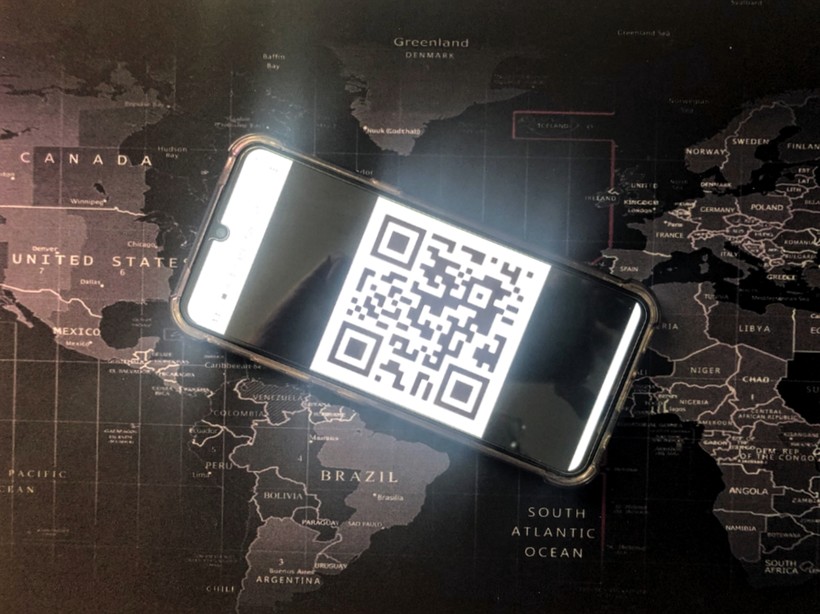 In some cases, vaccine passports would be tied to apps on smartphones that could use individual identifiers, such as QR codes like the one shown here, to connect someone to their vaccination history. Steven Potter/WPR

Experts Debate Use Of Technology To Curb Pandemic

As Wisconsin and other states get closer to having enough COVID-19 vaccine for everyone who wants it, there’s discussion about having proof of vaccination to fly on an airplane, return to work, attend a concert or ballgame — in other words: find a way to return to a more normal way of life.

Often called a "vaccine passport," such documentation has been controversial. President Joe Biden has said the federal government will not issue a vaccine passport, although it is working with private companies to develop standards. States like Texas and Florida have also come out against such a COVID-19 vaccination certificate, which can be kept and displayed digitally on a smartphone to gain access to certain locations.

Digital COVID-19 passports, like Israel’s Green Pass, have helped get that country "back to near normal in record time," said professor Lawrence Gostin of Georgetown Law. He has written extensively about the topic, including an essay in JAMA.

An NPR story notes Israel, one of the world's most vaccinated populations per capita, is a leading proponent of vaccine passports, arguing they are key to reopening economies for tourism and business travel.

In Wisconsin, two Republican lawmakers are proposing legislation that could prevent such a program from being implemented. In early April, Rep. Gae Magnafici, R-Dresser, announced she was introducing legislation along with Sen. Rob Stafsholt, R-New Richmond, that would ban discrimination based on medical history.

"Some people cannot receive the vaccine and others don't have access. I cannot stand by as businesses ban customers for not yet receiving a vaccine," Magnafici wrote on her legislative webpage.

Equity is also a concern of Gostin, who spoke during a virtual conference Friday put on by the Tommy G. Thompson Center on Public Leadership. But Gostin thinks once vaccines can be easily accessed by all those who want them, vaccine passports — or "digital health passes," as he prefers to call them — should be implemented.

"Every individual has the right to control their own body, make decisions about their own health and wellbeing," Gostin said.

"But they don’t have the right to expose others to potentially dangerous infections. You don’t have a right to go into a crowded, public indoor space unvaccinated and unmasked. That’s not your right. It may be your right to make decisions about your own health but not the health of others," Gostin said.

The panel of technology and ethics experts also discussed tracking apps used during the COVID-19 pandemic.

Many states, including Wisconsin, use smartphone apps designed to tell someone if they’ve been in contact with another person who is infected with the virus. More than a million people have downloaded or enabled the Wisconsin Exposure Notification app, which uses Bluetooth technology.

But critics contend strong privacy protections have made it ineffective for contact tracing. Health officials can't use notification data to see whether people exposed to COVID-19 are isolating. They also can't find infection hotspots.

The University of Wisconsin-Madison has its own app used to assist in contact tracing. Called Safer Badgers, it also allows students and staff to access campus buildings with a negative COVID-19 test.

Despite what some contend are drawbacks to the use of such technology during the pandemic, supporters believe tracking apps have the ability to reduce the health impacts of future disease outbreaks and limit economic fallout if used widely and correctly.

"There was really one key feature that set COVID-19 apart from all the other pandemics in history and set into motion an opportunity to ensure another pandemic does not affect us in the way this one did. That key feature is technology," said conference participant Samuel Wosika, a UW-Stout graduate who is now a systems engineer for Cisco Systems in the Twin Cities.