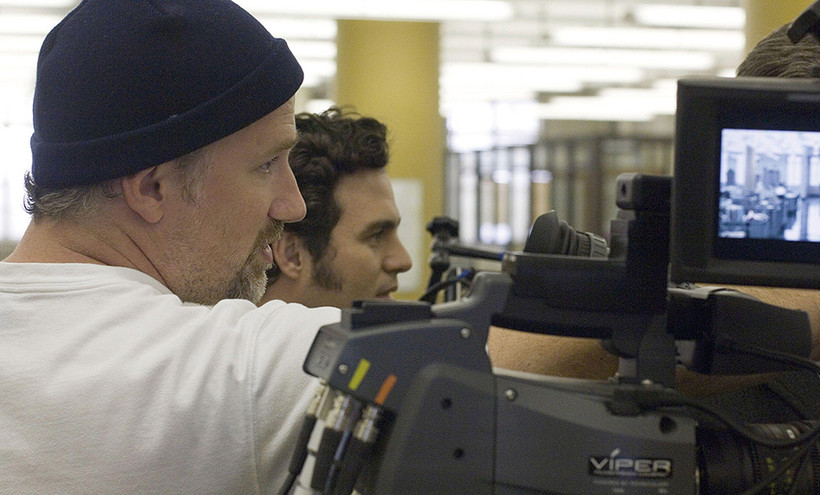 The exacting and evolving genius of filmmaker David Fincher

In 1985, aspiring director David Fincher was tapped by the American Cancer Society to make a PSA. Riffing off Stanley Kubrick's "2001," Fincher put forth one of the most provocative and memorable commercials ever featuring an in-utero fetus smoking a cigarette to demonstrate the dangers of pregnant smoking.

This PSA was just the beginning of Fincher's ability to utilize the shared language and visuals of film to express a point. He would move next to directing music videos where he famously invoked Fritz Lang's "Metropolis" while directing Madonna's 1989 video for "Express Yourself."

Film critic Adam Nayman told WPR's "BETA" that Fincher's cinematic ambition was present in all of this early work before he became a household name directing transcendent films like "Fight Club," "Se7en," "Zodiac" and "The Social Network."

"I think that he was part of a cycle of music video directors who were drawing on movies for the music videos. So, by the time they ended up making feature films, the visual language and the ambition were already there," Nayman said.

Nayman is the author of "David Fincher: Mind Games," a comprehensive critical companion book to Fincher's career output thus far. It's the third installment of Nayman's deep dives into generational filmmakers that includes the Coen brothers and Paul Thomas Anderson.

Nayman said Fincher became a highly in-demand director in the MTV universe because he was still implying elements of advertising. The videos he made turned the artist into the product that was being sold. For a future feature filmmaker who would develop an unmistakable aesthetic style and thematic focus, this tactic now looks strangely impersonal.

"The videos aren't about David Fincher, right? The style, the lens and the color palette, the cutting. Yeah, you could recognize him in it, but it's never to the point of overshadowing the artist," Nayman said.

Even though Fincher has been thrice nominated for an Academy Award in directing, Nayman said perhaps the best directorial work he's ever done is the music video for George Michael's "Freedom! '90" music video. The video, which features a series of models (both male and female) lip-syncing, achieves the necessary complexity to match the song's complicated conceit of fluid identity and sexuality.

"Fincher is all over it in terms of how it's made. But it's about George Michael. That's why he kept getting all this music video commissions," Nayman said. "And then once he gets into feature film, I think his personality and the idea that he's maybe making movies for and about himself starts becoming a little more evident."

While Fincher has become a household name for all of his success in the succeeding decades, Nayman argues he's also notably become known for his meticulous and perfectionist ways.

Fincher's rigorous approach — which includes doing repeated, sometimes upwards of hundreds of takes — has rankled a few feathers, especially amongst actors, but there's no arguing with the results. After a miserable experience attempting to helm the third film in the "Alien" franchise, Fincher acclaimed critical and commercial praise with his second feature, the serial killer blockbuster, "Se7en" with Brad Pitt and Morgan Freeman. Nayman said the genius behind "Se7en" is that Fincher makes the viewer complicit in the film's outlook.

"Without an audience, without a viewer, what the killer is doing is meaningless and without us to sort of sit and want the puzzle to be completed, what Fincher is doing is meaningless," Nayman said. "He makes us want the killer to succeed, and he makes us want the cops to fail because otherwise we're denied the shape and pleasure of the killer's overall design. And that's one of the things about the movie that I think is really extraordinary."

"You kind of want the killer to see this thing through to the end because you're going to feel cheated otherwise," Nayman continued. "And that's a really ingenious and diabolical and affecting structure for a thriller."

It's clear the concept of serial killers fascinates Fincher as it permeates his career. In addition to creating Netflix's bingeworthy series, "Mindhunter," based on the real-life practice of the FBI's serial killer profiling program, Fincher's best movie is arguably 2007's "Zodiac," which tells the compelling and unresolved story of the Zodiac killer who haunted northern California in the late '60s, early '70s.

"You are moving from a stylized world like the one in 'Se7en,' which is meant as a kind of the worst possible version of ours, into a more recognizable and everyday version of our world, but that still plays host to that kind of depravity and that kind of psychosis," Nayman said.

"I think that 'Zodiac' is a wonderful follow-up in that it takes everything that's kind of perfect about the original movie, like the fact that it has a killer who lives up to his methods, and it completely reroutes that," Nayman continued. "There is no monster at the end of the movie. And so instead of that perfect, Iron Maiden-like structure you have in 'Se7en' where everything closes in and comes together. Zodiac is totally open-ended."

Nayman is unambiguous that "Zodiac" is Fincher's best work because of that ambiguous ending. He said that is one of the most daring moves by a director. Furthermore, the film's meticulously researched, and procedural structure is the embodiment of Fincher the filmmaker.

"Zodiac" also represented a pivot for Fincher, marking the first time he adapted a historical period and story. He would take this a step further in his 2010 film, "The Social Network." Collaborating with scriptwriting virtuoso Aaron Sorkin, "The Social Network" offered a treatment on the litigious beginnings of Facebook and its embattled founder, Mark Zuckerberg.

Nayman said Fincher's handling of Sorkin's trademark whirlwind dialogue, including the famous opening scene where a fictionalized breakup instigates the idea for Facebook, created perhaps the most enjoyable experience of what could have been a very dry subject matter.

"These are characters whose synapses flash very quickly. They're smart, they're Ivy League, but there's also something about their narcissism and their solipsism that speeds them up," Nayman said. "And so, I love that scene because it evokes '30s screwball but in a 21st century context where everything old feels new again. And I love the way that the speed keeps changing. Their dialog is so fast. Then his trip home from the bar after they break up, even though he's jogging, it's got a really sort of glacial, funereal pace."

Nayman argues Fincher has carried this practice into his contemporary films like "The Girl with the Dragon Tattoo" and "Gone Girl." He said it's a natural skill progression for someone so exacting and fixated on procedure.

"When you're working with that kind of speed and you're cutting in your storytelling, you'd think you'd miss all the details. But he actually finds a way to make these incredibly fast movies where the details keep jumping out at you. And that's the alchemy that I'm always dazzled by with him, is this yoking of speed to clarity, which he does like no filmmaker I can think of," he said.

Fincher differs from other auteurs and filmmakers in the sense that most of his films are fairly deliberate in their interpretations. They're exercises in perfection, not abstraction. But Nayman said that creates an unending debate on Fincher's place in the annals of directors.