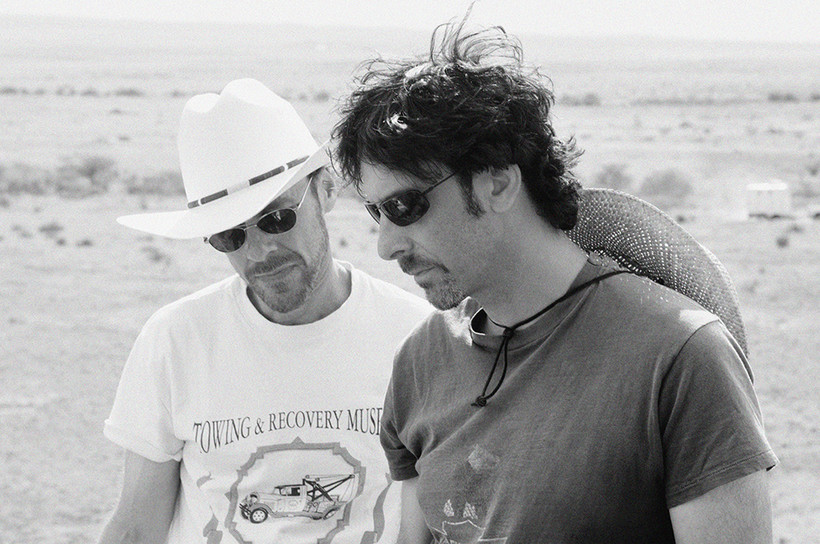 The Coen Brothers: This Book Really Ties the Films Together, by Adam Nayman © Abrams Books, 2018

His Definitive Filmography 'The Coen Brothers: This Book Really Ties The Films Together' Doesn't Need A Rug
By Adam Friedrich
Share:

There is a particular shot in the 2009 film "A Serious Man" by Joel and Ethan Coen that film critic Adam Nayman believes is both the most indelible image of their collected works and offers up a perfect metaphor for his quixotic undertaking, "The Coen Brothers: This Book Really Ties the Films Together."

The shot is of the film’s protagonist, Larry Gopnik, a milquetoast Midwest professor scribbling a series of mathematical equations on a chalkboard about the "Uncertainty Theory." The shot then pulls out to reveal Gopnik so dwarfed by his complicated theorem that as Nayman writes, "it looks like an entire vast galaxy swirling above him."

"Within the movie, it signifies something about that character and his existential dilemma, but I definitely used it as way of illustrating my own. The determination to sort through and connect the movies and also the feeling that it might be too daunting a task," Nayman tells WPR’s "BETA."

Undaunted, Nayman has produced the definitive work on the Coen’s filmography. It is an IMAX-sized coffee table book that just might break most coffee tables, as Nayman himself recently joked about on Twitter.

Most people struggle to pick it up https://t.co/jlNAm3mzB1

The hefty tome, complete with gorgeous and arresting stills from the Coen’s films and interviews with their most frequent collaborators, features Nayman’s critical essays on each film as he attempts to identify a grand unified theory of their cinematic universe.

The central motif of the circle can be taken quite literally as Nayman cites the hula-hoop from "The Hudsucker Proxy" or the tumbleweed from "The Big Lebowski." Or the central motif can err on the philosophical.

"('Inside Llewyn Davis') has the line, 'If it’s not new and it never gets old, it’s a folk song.' Which is a very circular kind of reasoning about how either certain works endure or taste moves in cycles of fads and popularity," Nayman said.

Another distinct aspect of their catalog is the Coen’s ability to immerse and subvert classic Hollywood genres and tropes and to an extent, "Coen-ize" them.

"I think that one of the really interesting tensions in their work is always between them asserting a certain identity," Nayman said "and also honoring aspects of what (genre) they’re working in."

Nayman said a perfect example of this is their Oscar-winning adaptation of Cormac McCarthy’s novel, "No Country for Old Men." The Coens were completely faithful to the source material, but still left their own identifying mark. They saddled Javier Bardem’s depiction of the book’s villain, Anton Chigurh, with a ridiculously comical pageboy haircut.

"There are little variations," Nayman said, "that are very, very much theirs and I think can be tied to other films, but also just are not deferring to the source text."

In the wake of transcendent films such as: "Fargo," "O Brother, Where Art Thou?" and finally "No Country for Old Men," the Coens surfaced as household names. They also had cult success with "The Big Lebowski" which has launched ongoing screenings in theaters across the country and even a Lebowski Fest.

The allure of their films may be their ability to be watched repeatedly. Nayman chalks this up to focused storytelling and brevity in run times, but also to just the overall quality of the acting and the brothers' severe attention to detail.

"They also have a lot of high points like quotable dialogue or exciting moments that you look forward to watching again," he said.

One of the central themes Nayman lays out in his book is the motif of fear or uncertainty of the future that’s present in most of the Coen Brother’s films. In fact, he jokes, the only thing he was certain about while writing the book was their omnipresent uncertainty. Many of their films end ambiguously and have a lot of deference to the characters and their mortality.

Nayman said this is an area that has been an evolution in their work beginning with "No Country" through their latest offering for Netflix, "The Ballad of Buster Scruggs" — an anthology film of six vignettes that all meditate on mortality.

"I think their early movies had death in them as a plot point and murder and violence because that’s the bottle that their working in," Nayman said. "I think that now as they’ve gotten older, they deal with mortality in a way that I find quite serious. Not humorless and not ponderous or pretentious, but not funny."