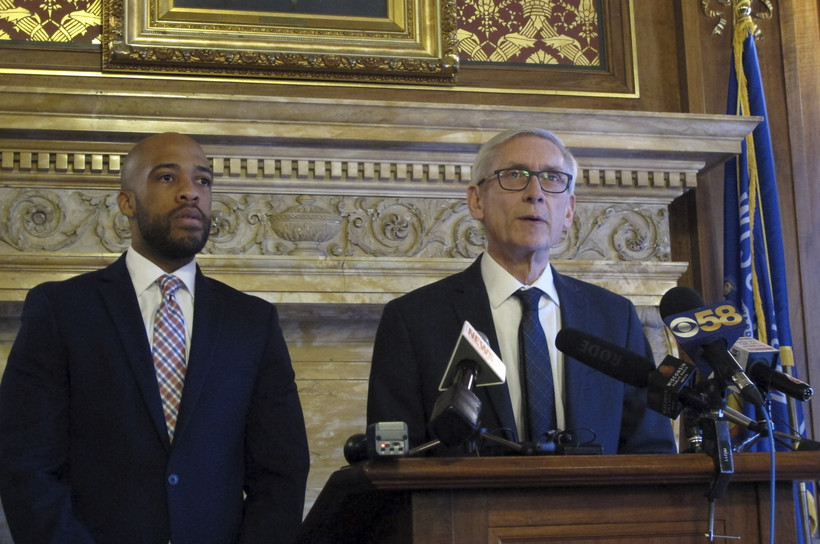 Evers: Policymakers Should Find Ways To Respond To Protests

"The fact of the matter, no matter where you are, people are calling for changing systemic racism," Evers said in an interview with WPR, together with Lt. Gov. Mandela Barnes. "People care about these issues."

Wisconsin saw dozens of protests against police brutality and racial injustice across the state last weekend, including a Madison event Sunday attended by 10,000 people and many events held in small cities and rural parts of the state. Many policymakers are looking for ways to respond to the issues raised by protesters in the wake of the killing of George Floyd by Minneapolis police.

"Defund the police" has become a slogan of some protests. Members of the Minneapolis City Council pledged to disband that city’s police department.

Evers said the conversation at the local level should be about helping those in need without involving law enforcement.

"Are there things that are better done at the community level, whether it's issues around mental health services or dealing with homelessness and so on?" Evers said. "If we're stronger in those areas that frankly take up a lot of law enforcement time, everybody can do a better job."

Barnes said it makes sense to look at how communities allocate resources, and that they should do so with an eye on addressing social problems "on the front end."

"When people say 'defund the police,' we first should take a moment to look at what the numbers actually are, and think about what can we pay for up front to actually enrich people’s lives and provide the resources that are necessary for them to be able to be productive," Barnes said.

Most police budgets in Wisconsin are controlled at the local level. In September, Milwaukee Mayor Tom Barrett introduced a city budget that would have increased the overall police budget but reduced the force by 60 officers. A group of Republican lawmakers representing Milwaukee County later warned that such a change would lead to an increase in crime.

Other policy changes discussed in response to protests are a state law to require de-escalation training for police, a nationwide ban on chokeholds, and a national registry tracking police misconduct. A protest group in Milwaukee delivered demands there that include regular psychological evaluations for police and a requirement that all police working in the inner city be from those areas. In Madison, protesters outside the school board president's house called for "cop-free schools."

With respect to needed reforms, Barnes said "with so far to go, it's not about taking baby steps. It's about taking as many steps as possible."

"Making communities stronger is the most important thing," Evers said. "The vast majority of protesters are saying, 'Let's have a conversation about how that might look differently.'"