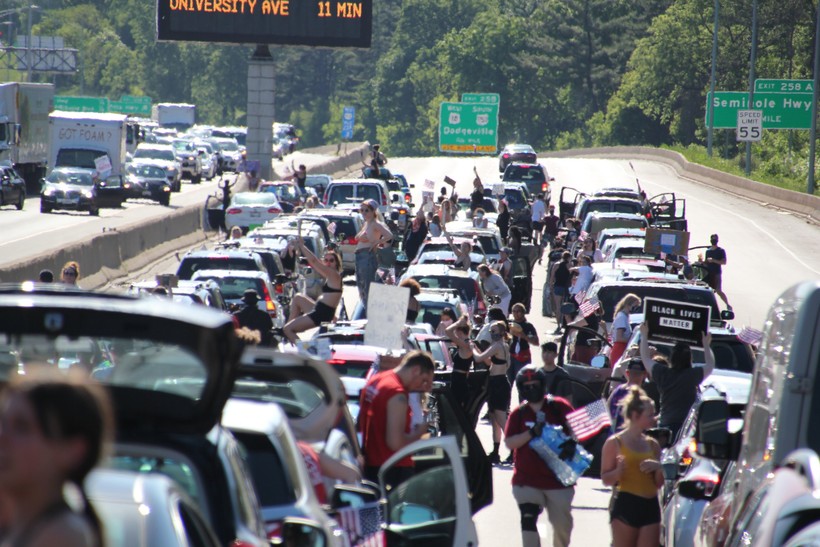 Traffic slowed to a standstill on the Beltline in Madison on Thursday, June 4, thanks to a car caravan protesting the killing of George Floyd and other incidents of police violence. Shawn Johnson/WPR

Protesters blocked traffic on a major arterial roadway and confronted a school board official in Madison, while hundreds in Milwaukee marched to Wauwatosa, in the seventh day of statewide protests calling for justice for George Floyd and decrying racial injustice.

Protesters also gathered in Superior and Sturgeon Bay on Thursday, and another event had been planned in Eau Claire. The protests came as hundreds gathered in Minneapolis for a memorial service for Floyd, a black man who died last week while in Minneapolis police custody.

Past nights of protest around the state saw police deploying tear gas and pepper spray against demonstrators, and some demonstrators looting and destroying property. Thursday night's protests were more peaceful.

In Madison, a caravan of protesters' cars crawled across the city, blocking traffic on the Beltline for over an hour, before driving across town to confront School Board President Gloria Reyes at her house. The caravan started at 3 p.m., with more than 150 cars in line after meeting on South Park Street. Organizers, including Freedom Inc., had asked attendees to "bring materials to secure signs to your vehicle."

Yaa Ampofo, a graduate student at the University of Wisconsin-Madison, was one of many participating in the caravan. She said she was there to keep up the momentum. 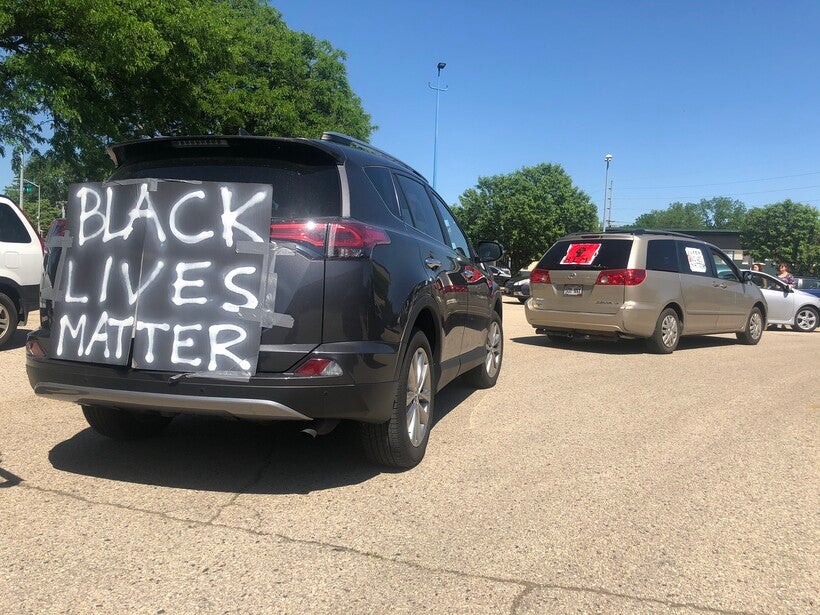 In Madison, Black Lives Matter protesters participated in another car caravan June 4, 2020. Organizers, including Freedom Inc., asked attendees to "bring materials to secure signs to your vehicle." By 3:30 p.m. more than 90 cars were in line. Laurel White/WPR

The vehicles merged onto the Beltline just after 4 p.m., with the group traveling about 5 to 10 mph. Vehicles flew flags that said, "I can't breathe," "Black Lives Matter" and "No justice, no peace," and drivers honked their horns.

The caravan eventually exited the highway and used city streets to loop back through the city, eventually ending up on the north side, where protesters confronted Reyes at her home.

Protest leaders shared demands that included removing police officers from Madison's schools, and boosting funding for school programs supporting racial minorities. Reyes came out to speak to the protesters, saying that "we have to reconsider the use of officers in our schools" after the killing of Floyd.

Reyes told protesters she would commit to putting the matter of police in schools on the board's agenda, although she wouldn't commit to a date.

Reyes: “You guys have me on Facebook live in my pajamas.” Protester says she shouldn’t be embarrassed by her outfit, she should be embarrassed of her lack of action on removing police from schools.

Protesters also gathered once again at the Capitol Square later in the evening after the caravan disbanded, marching around the downtown area.

Several marches happened in Milwaukee, including one that started at 4 p.m. at the intersection of 27th and Center streets, near the Sherman Park neighborhood. That group of several hundred protesters headed westbound, and arrived in Wauwatosa at about 6:40 p.m.

Protest organizers had said their destination is Mayfair Mall, where Wauwatosa police fatally shot a black teenager earlier this year. However, the protesters reportedly turned back for Milwaukee after 11 p.m. without having reached the mall.

Among the marchers was Percy Hayes, who has taken part in the protests for seven consecutive days with organizer Frank Nitty. He said every day he sees more and different people join the movement, which he called a "beautiful thing."

"Personally, I have a terrible reputation with the police, but what I see today, and what I have been seeing every single day, I feel like we've got a real shot at some real change," Hayes said.

Organizer Frank Nitty’s protest is about five blocks from Wauwatosa.
This is Percy. He says he has a terrible reputation with police. But after seven days of #blacklifematters protests he believes the movement could bring meaningful change. pic.twitter.com/tJUbX0mUqT

Andre Triplett is carrying an AR-15. He say to protect Frank Nitty from white supremacists. He says the bullets are not for the cops. pic.twitter.com/Yjov1I8FGH

Another group of protesters gathered at Cathedral Square Park in the late afternoon, and marched through downtown Milwaukee. At one point the march reportedly shut down freeway traffic on Interstate 94.

Alexa Brown marched with about 200 protesters on Prospect Avenue and North Avenue on Milwaukee's East Side. This was the first time she attended one of the protests of the past week. She said she was surprised by how diverse the protest was, especially in Milwaukee, a highly segregated city.

"I just felt like I wanted to do my part and get in the streets with the people," Brown said. "Social media is one thing, but I feel like this is the pain of a lot of us and I want to be active in the support."

On Thursday afternoon, a mural of Floyd was painted on a vacant building on the corner of North Avenue and Holton Street. According to a Facebook page planning the mural, "any and all artists" were invited to participate. The mural was approved by the property owner, according to the post.

"No one is in charge and every idea is valued. This will not highlight any individual artist and it’s only intention is to create a beautiful memorial honoring George Floyd," the page read.

Thursday afternoon, the Milwaukee County Transit System announced they would be suspending all bus service starting at 10 p.m. Thursday. Service will also end early Friday, Saturday and Sunday due to "significant service disruptions in the past six days." 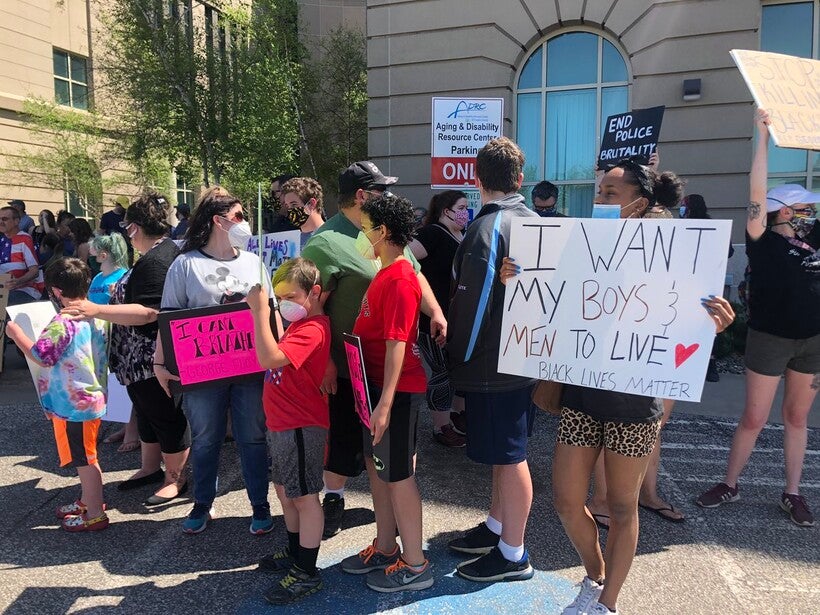 Clivia Prince, 21, of Superior holds a sign that reads: "I want my boys and men to live. Black Lives Matter," at a protest at the City of Superior Government Center on June 4, 2020. Prince said she has a younger brother and doesn’t want to worry about his safety walking down the street as a black man. Danielle Kaeding/WPR

In Superior, nearly 100 demonstrators gathered at the City of Superior Government Center.

Clivia Prince, 21, of Superior, held a sign that read: "I want my boys and men to live. Black Lives Matter."

She said she has a younger brother and doesn’t want to worry about his safety walking down the street as a black man.