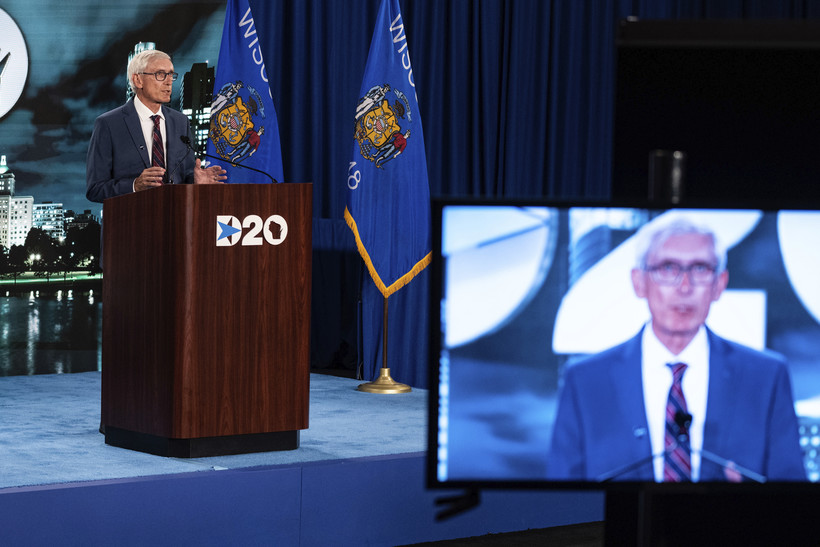 Evers To DNC: 'Holy Mackerel, Folks. Let's Get To Work.'

Wisconsin's Governor Kicked Off The Third Night Of The DNC With One Of His Catchphrases
By Shawn Johnson
Share:

He only had about a minute in the spotlight of the Democratic National Convention, so Gov. Tony Evers tried to make it count.

Wisconsin may have lost its chance to host the DNC, but Evers used his brief moment in the convention spotlight to introduce the nation to one of his signature catchphrases. "Holy mackerel" appeared nowhere in his scripted remarks, but it was heard by potentially millions who watched the DNC's video stream.

Evers was the first speaker on the third night of the DNC, which was originally scheduled to be held in Milwaukee but was moved to a virtual format because of the coronavirus pandemic.

"We were really looking forward to having you here in America's Dairyland," Evers said. " But what unites us is far, far greater than what divides us. So even though we can't be with each other, I know we have a shared sense of purpose."

Evers is hardly the first Wisconsin Democrat to lament the loss of the DNC, but like others, he's said the decision was necessary to prevent the spread of COVID-19.

"This November is about returning kindness, respect, empathy and civility back to the White House," Evers said. "And that's who Joe and Kamala are."

Though Evers spoke for just over 60 seconds, he managed two "folks" references in addition to his signature "holy mackerel" line to close the speech.

Wisconsin has played a relatively small part in the convention it was scheduled to host. In addition to Evers, U.S. Rep. Gwen Moore, D-Milwaukee, gave a brief speech to the DNC Monday, DNC delegate Jason Rae called the roll at the convention Tuesday and Lt. Gov. Mandela Barnes delivered brief remarks when Wisconsin formally cast its votes for Biden. U.S. Sen. Tammy Baldwin is scheduled to address the convention Thursday.