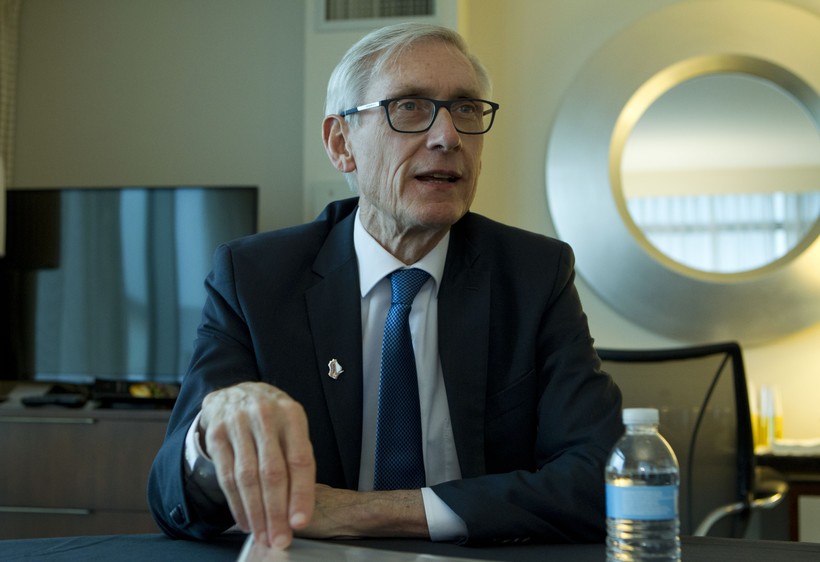 Evers' Budget Plan To Boost Care For Children With Disabilities

Gov. Tony Evers will use his state budget to call for eliminating a waiting list for a program that serves children with disabilities — one of several decisions the governor wants to pay for by accepting federal money to expand Medicaid.

Evers will also propose a new office in state government that would contract with foreign drug manufacturers to import generic prescription drugs to Wisconsin.

The ideas are among several the governor will announce Thursday that are linked to health care, an issue he and other Democrats campaigned on extensively in the run-up to the 2018 election.

Underpinning many of those proposals is the extra funding Evers wants to unlock by expanding Medicaid, an expansion the Republicans who run the Legislature staunchly oppose.

"Everyone deserves access to quality, affordable health care," Evers said in a statement. "That is why I am keeping my promise to the people of Wisconsin by accepting federal funds to expand Medicaid and reinvesting those savings into initiatives that will improve the health and well-being of all Wisconsinites."

Details of the governor's budget plan shared with Wisconsin Public Radio show Evers will call for increased state and federal funding for the Children's Long-Term Support Waiver Program, which serves children with physical or developmental disabilities whose families fall within certain income thresholds. The program lets children continue to live with and receive care from their families outside of an institution. Services can include counseling, nursing and specialized transportation.

According to a nonpartisan Legislative Fiscal Bureau summary of Wisconsin's Medicaid programs, 7,302 children were enrolled in the program in July. At the same time, an additional 2,054 children were on waiting lists.

But with thousands of children still on the waiting list, Evers wants to boost overall funding by another $36 million per year, an increase of roughly 44 percent.

Evers will also call for a new "Drug Importation Program" in the state Department of Health Services that would contract with foreign drug manufacturers. His proposal would follow in the footsteps of former Democratic Gov. Jim Doyle, who tried a similar initiative 15 years ago in a partnership with the Illinois state government.

According to Evers' office, drug importation would only be allowed when it would create "substantial savings." Drug manufacturers would also be required to comply with certain federal regulations regarding the safety of each drug.

While the broad strokes of the governor's plan shared Wednesday didn't list specific countries, Evers said during his campaign he wanted to work with "licensed Canadian pharmacists" on a state-run, drug re-importation program.

Evers also plans to call for a new prescription drug transparency program that would be run by the Office of the Commissioner of Insurance. The plan, which bears some similarities to a bipartisan bill introduced this week, would require "pharmacy benefit managers" to report to the public when they negotiate price reductions.

Both prescription drug proposals are relatively inexpensive, but it remains to be seen whether the governor can pay for the rest of his budget wish list without expanding Medicaid under the terms of the federal Affordable Care Act.

The governor's office said the move would expand coverage to an additional 82,000 Wisconsin residents while at the same time, freeing up $320 million in state funding over two years.

Walker first rejected the federal Medicaid expansion in 2014, a move that has cost state government more than $1 billion, according to the Legislature's budget office.

Democrats have campaigned for years on changing that, a pledge Evers reaffirmed during his State of the State address in January.

"Health care should not be a partisan issue," Evers told lawmakers. "Republican states like Kentucky, Nebraska and Idaho have expanded Medicaid, and so have Democratic states like Washington, California and Minnesota. We should be able to get it done here, too."

But Republicans have said the issue is a non-starter with them, arguing it will increase costs for people with private insurance.

Vos and Senate Majority Leader Scott Fitzgerald, R-Juneau, both say an expansion of Medicaid is a non-starter in the Legislature, and have floated the prospect of scrapping major portions of Evers' budget and replacing it with a spending plan of their own.

Evers has vowed to pursue Medicaid expansion despite that opposition, saying on that issue and others, he thinks the public is on his side.