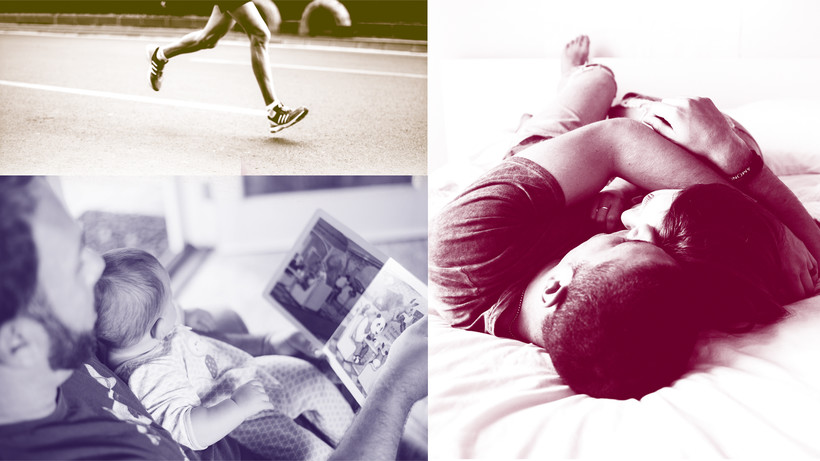 Daily touch is about moving your skin, which can come from exercise, daily routine, or just the embrace of the ones we're in quarantine with.

Even During Quarantine, You Need A 'Daily Dose Of Touch,' Doctor Says

It’s a strange, contact-free world we live in right now.

"Handshakes are gone for now," said Dr. Anthony Fauci, director of the National Institute of Allergy and Infectious Diseases.

Currently, we're seeking out the no-touch alternatives to a friendly hug hello or goodbye. At least for the foreseeable future, you can’t kiss a date, get a massage, hold someone else’s baby, or high-five a teammate without risking everyone’s health.

Even the president misses touching his face.

What happens when an entire nation is touch deprived? "To the Best of Our Knowledge," checked in with Dr. Tiffany Field, founder and director of the Touch Research Institute at the University of Miami Medical School and a pioneer in the field of therapeutic touch.

Anne Strainchamps: Have Americans ever been this touch deprived?

Tiffany Field: Actually, I think we’ve been headed in this direction — the no-touch culture — for a while.

For example, one of our teams has been doing an airport gate study, monitoring and coding social contact at airport gates, and we’re not seeing any touch. Ninety-eight percent of the time people are on cell phones. They’re scrolling and texting and gaming, but they’re not talking. So, I'm not sure people really are feeling that touch deprived.

AS: Is the U.S. different from other countries? Do Europeans feel more touch deprived?

TF: I can tell you that it's different in Paris. Parisians are very disturbed that they can't kiss each other on the cheeks right now.

There are some interesting studies from a few years back that observed couples in cafes, to see how often they touched each other. In the U.S., it was about once every 30 minutes. In Paris, it was more like 20 times every 30 minutes.

AS: That’s a big difference.

AS: I’m worried about the effect social isolation might be having on all of us. We’re missing a lot of casual, daily physical contact with other people. How important is that?

But there are a lot of other ways to move the skin — yoga or stretching or sit ups. Pretty much every form of exercise.

AS: We can get the benefits of touch just from moving the skin? Don’t we need skin-to-skin contact with other people?

TF: The positive effects — the healthy effects of touch — come from moving the skin. That stimulates the pressure receptors under the skin, which send messages to the brain — mainly to the vagus nerve, which has branches in virtually every part of the body — that slow the nervous system down. So you get decreases in heart rate, blood pressure and stress hormones. You get changes in the brain waves to theta activity, or relaxation waves. You also increase the natural killer cells, which ward off viral cells, bacterial cells and cancer cells.

AS: So ironically, at a time when we can't be touching each other, touching might be just what we need to stay well?

TF: Touching and moving the skin has a huge effect on the immune system.

But just think about the fact that we’re washing our hands all the time now. Assuming you’re doing it correctly, you’re moving the skin of your hands. And that helps you stay healthy not only by washing the virus off, but by stimulating your pressure receptors.

AS: We have weeks — maybe months — of social isolation ahead of us. Do you see any good coming out of this?

TF: I think that with people being isolated at home, family members may actually be touching each other more, because they have more time with each other.

I hear from my friends who have kids that they’re holding them on their laps a lot and hugging them a lot, because they know that a hug or a back rub will calm the kids down. And when you touch someone else, it calms you down, too, so it also helps the parents.

AS: What about people who live alone, who don’t have anyone handing out hugs and back rubs?

TF: What I'm saying to single people who don't have anybody touching them is that they need to do self-touch. They need to do yoga. They need to walk around the room stimulating the pressure receptors on their feet. They can get the stimulation they need by lying on the floor and doing crunches or sit ups. All of that will contribute very similar effects to being hugged or just shaking someone else’s hand.

AS: Sounds like we should be thinking about touch the same way we think about diet and exercise?

TF: You’re right on. It’s just like that. We all need a daily dose of touch.