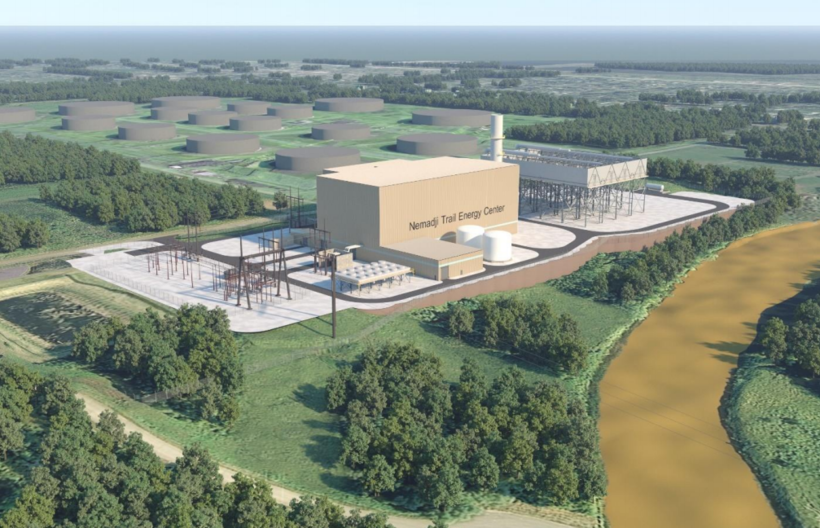 A rendering of the proposed gas plant alongside the Nemadji River in Superior.

Environmental and indigenous groups want a federal agency to take another look at the environmental and climate impacts of a proposed $700 million natural gas plant in Superior.

Four organizations, including the Sierra Club and Clean Wisconsin, are petitioning the Rural Utilities Service to conduct a supplemental environmental assessment of the project proposed by La Crosse-based Dairyland Power Cooperative and Duluth-based Minnesota Power. Dairyland Power plans to seek a loan from the agency for its share of the project.

The agency previously found that construction and operation of the 625-megawatt plant would have no significant environmental impact. But the groups argue the agency didn't evaluate cumulative climate impacts of the plant in its environmental assessment.

"This facility would emit 3 million tons of carbon every year for at least 30 years if it's built, and there's just no way to get to zero carbon if we keep building things that emit carbon," said Katie Nekola, general counsel for Clean Wisconsin.

Clean Wisconsin and the Sierra Club are also suing the Wisconsin Public Service Commission over its approval of the project, noting regulators didn’t review the climate impacts of the proposal. They say the U.S. Department of Agriculture Rural Utilities Service must respond to their petition before making a decision on financing for the project.

The two power providers are seeking to build the plant as part of plans to transition away from coal to renewable energy.

“The Nemadji Trail Energy Center is a bridging resource that supports renewable energy, can provide reliable electricity in all weather conditions and helps us move steadily towards a lower-carbon future,” said Dairyland spokesperson Katie Thomson in a statement.

Dairyland set a goal last November to cut carbon emissions in half from 2005 levels by 2030. The power cooperative retired its Genoa coal plant in June of this year. Minnesota Power plans to go carbon-free by 2050.

Dairyland Power, which has 24 members in Wisconsin and Iowa, plans to operate the facility alongside Minnesota Power in compliance with state and federal air regulations once it receives all necessary permits. Thomson said the plant will be built with more efficient equipment and sophisticated air pollution controls, adding the facility’s emissions will be 65 percent lower than any similar coal-fired power plant.

While natural gas typically produces half the emissions as coal, there’s mounting pressure on utilities and the Biden administration to prevent construction of new plants that derive power from fossil fuels.

“This is important because Dairyland is asking the federal government to subsidize fossil fuels and that's exactly what the Biden-Harris administration has vowed to stop doing,” said Stephanie Fitzgerald, staff attorney with the Minnesota Center for Environmental Advocacy. “This loan is important because it's going to test whether the federal government is going to continue on with business as usual or take bold steps to address climate change.”

President Joe Biden issued an executive order earlier this year that all agencies should review rules and ensure decisions are in line with the administration's climate policies. A spokesperson said the agency is reviewing the petition.

“We are committed to carrying out our duties in a manner that is fully consistent with the nation’s environmental laws and regulations as well as the President’s executive orders,” said a spokesperson with USDA Rural Development in a statement.

The groups pointed to several studies in their petition that have found new gas plants are incompatible with scientists’ climate goals to reduce global warming or that gas plants should include carbon capture technology. The research was published after the agency’s environmental assessment was completed.

Superior Mayor Jim Paine said he has faith that the multiple agencies involved in reviewing the project will give the proposal a thorough analysis.

“If they're satisfied with the original environmental assessment, then I'll trust that,” said Paine. “If they feel that there's compelling reason to take into account more or new information, then that's valuable to all of us as well.”

While Paine supports a 100 percent renewable energy system, he said that’s not possible with the technology that’s currently available to utilities. He favors a natural gas plant to fill in the gap and supplement renewable energy.

Dairyland Power said it’s analyzing new technology as it becomes available, but it does not currently plan to use carbon capture technology with the proposed facility. Thomson highlighted the plant will include state-of-the-art technology that would allow the use of alternative fuel sources like hydrogen or biofuels if they become economically feasible.

If built, Dairyland and Minnesota Power have said the plant will create 260 construction jobs and provide a $1 billion investment over the next two decades. The two power providers hope to have the facility in service by 2025 pending any permit approvals or legal challenges.