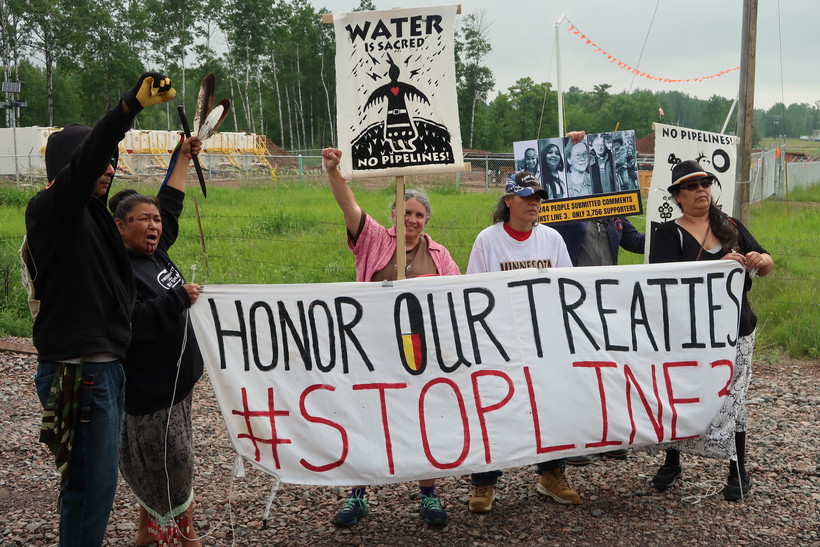 Just over a dozen self-proclaimed water protectors gathered at the Wisconsin-Minnesota state line south of Superior to vow they will prevent the line from crossing the border Friday, June 29, 2018. Danielle Kaeding/WPR

Tribal and climate change activists gathered at the Minnesota-Wisconsin state line to say they will stop the replacement of Enbridge Energy’s $2.9 billion Line 3 at the border.

Around 15 people gathered on the railroad tracks dividing the two states just south of Superior on Friday in the wake of Minnesota regulators’ decision to approve a certificate of need and route for the project Thursday.

LaDuke, also a member of the White Earth Nation, took issue with a foreign company staging equipment and pipes all along its preferred route through Minnesota before the state’s Public Utilities Commission signed off on the project.

"This is the border, and, as you see, they are poised at the border having anticipated that they would get what they wanted," she said. "I find it really problematic that a company would have staged all across a proposed route without a route approval." Enbridge argues the 1,031-mile replacement pipeline is necessary due to corrosion and cracking within the existing Line 3.

"We are very pleased that the PUC has determined the Line 3 replacement project is needed for Minnesota," said Enbridge Inc. President and CEO Al Monaco in a statement Thursday. "Replacing Line 3 is first and foremost about the safety and integrity of this critical energy infrastructure. This project will also help ensure Minnesota and area refineries reliably receive the crude oil supply they need for the benefit of all Minnesotans and the surrounding region."

"Enbridge has done their due diligence, and they’re very safety conscious, and I believe that this new line will be more environmentally safe than remaining with the old line," said Caesar.

He added that Enbridge provides millions in state and local revenues to Superior and the region.

Brian Hanson echoed those sentiments. The president and CEO of the business development organization APEX, which represents 84 business members across 10 counties in northern Minnesota and Wisconsin, said the project will create thousands of construction jobs in the area.

Hanson said Line 3 is critical in providing reliable transportation of oil to meet the energy needs of Minnesota and the nation. However, Fond du Lac  Tribal Member James Northrup III said there has to be another way.

"I’d like them to start removing it and doing things different — start going solar, wind," he said, noting Enbridge has sufficient financial resources. Opponents to Line 3 vow to stop replacement of the aging pipeline at the Minnesota-Wisconsin border Friday, June 29, 2018.  Danielle Kaeding/WPR

Tribal members and climate activists called Minnesota commissioners cowards who failed to address the environmental and cultural impacts of the project. The proposed routes for the replacement line was posed to tribes like that of "Sophie’s Choice," said LaDuke.

Peter Anderson with 350 Madison, a grassroots citizen action group on climate change, feared approval for Line 3 would justify the need for a twin pipeline to Enbridge’s Line 61 running through Wisconsin from Superior to the Illinois border.

"It would add about 350,000 to 400,000 more barrels of oil coming into Superior, Wisconsin, every day," said Anderson. "Unless Enbridge intends to pour that oil into Lake Superior, it’s going to force construction of another tar sands pipeline called Line 66 through Wisconsin with all the risks that these tar sands oil pipelines entail."

Enbridge has said it is not pursuing another pipeline along Line 61, but it has conducted surveys with landowners along the route. The company also told investors in recent years that it was in the early development of another pipeline through Wisconsin to avoid a bottleneck in service.

As for LaDuke, she said the fight over oil is just beginning.

"We are prepared to defend our water and defend this territory," she said.