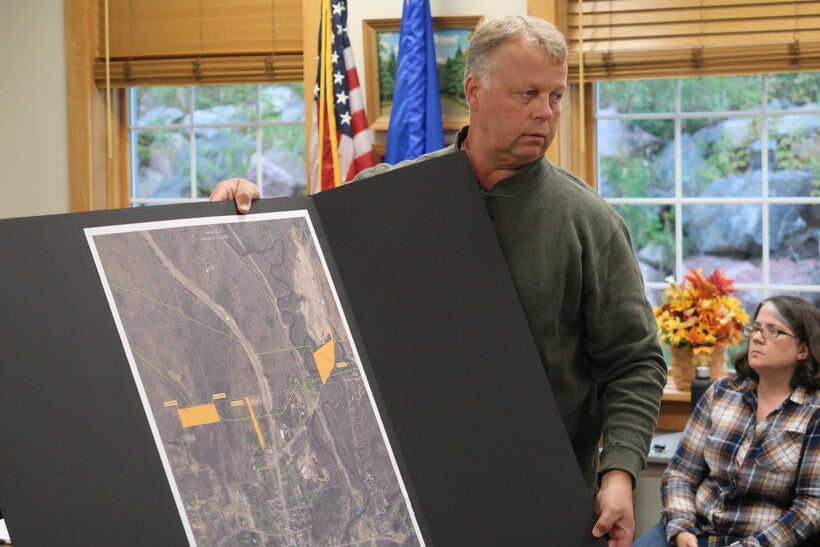 Enbridge contractor and land agent Paul Halverson displays a map of the four city-owned parcels that the company is requesting access to for land surveys. Danielle Kaeding/WPR

Enbridge Energy is requesting permission from residents and local governments to conduct land surveys in northern Wisconsin as it explores rerouting its Line 5 pipeline outside of the Bad River tribe’s reservation. Line 5 carries up to 540,000 barrels of oil and natural gas liquids per day from Superior to Sarnia, Ontario.

On Thursday, an Enbridge representative informed officials in the city of Mellen, about 30 minutes south of Ashland, that the company would like to access four parcels of city-owned property.

"Recently, the Bad River tribe filed a lawsuit against Enbridge asking the pipeline to be removed from tribal land. Because of what’s going on with the tribe, Enbridge is trying to be proactive and look at the possibility of relocating the Line 5 pipeline south around the tribal lands," said Paul Halverson, an Enbridge contractor and land agent. "Enbridge has an obligation to continue to deliver product through the pipeline. If we can’t be on the tribal lands, we need to figure out a different solution." 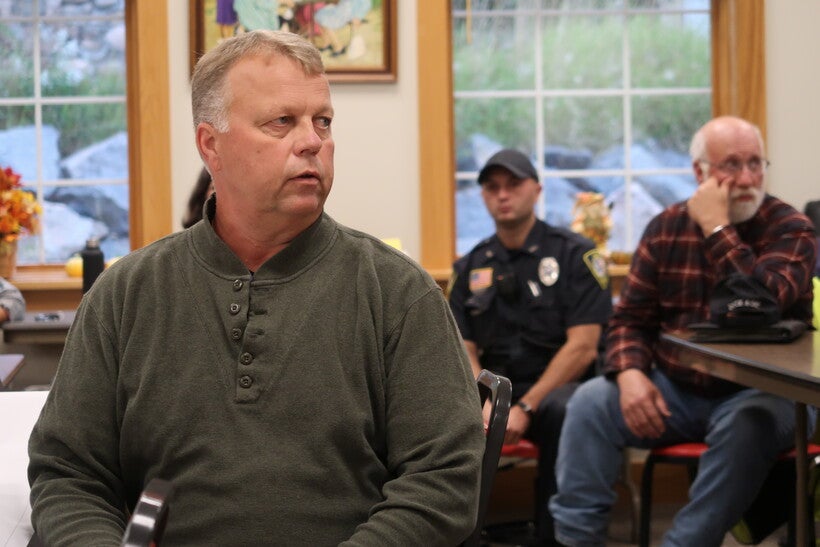 Enbridge contractor and land agent Paul Halverson answers questions from those attending a meeting about the company's request to access land to conduct surveys for a potential reroute of Line 5. Danielle Kaeding/WPR

The Bad River Band of Lake Superior Chippewa filed a federal lawsuit against Enbridge in July, requesting the company shut down the flow of oil due to concerns over a segment of Line 5 becoming exposed. Easements on a stretch of the pipeline crossing the reservation expired several years ago and the tribe declined to renew them.

Enbridge has said Line 5 has been operating safely through the reservation since 1953, serving as a vital energy link for northern Wisconsin and Michigan's Upper Peninsula.

The energy firm is looking to conduct environmental surveys along a 40-mile stretch in Ashland and Iron counties to replace the existing 20-mile segment of Line 5, according to an August letter to property owners from Enbridge. Any rerouted segment would be the same size as the existing line.

The surveys extend from the intersection of state Highways 137 and 112 in Ashland County to the intersection of U.S. Highway 2 and state Highway 169 in Iron County. The corridor was chosen due to existing right-of-way, but the company is exploring other alternative routes.The surveys began at the end of August, according to Jennifer Smith, Enbridge's community engagement manager for the Upper Midwest.

Several area residents who attended the city council meeting said they had been approached by Enbridge right-of-way agents in the last week. Those who spoke took issue with the way Enbridge was seeking land access, potential impacts from rerouting the pipeline and threats to water resources in the area. They pointed to the 2010 Kalamazoo River spill in Michigan where more than 1 million gallons of oil was removed, costing the company more than $1.2 billion. 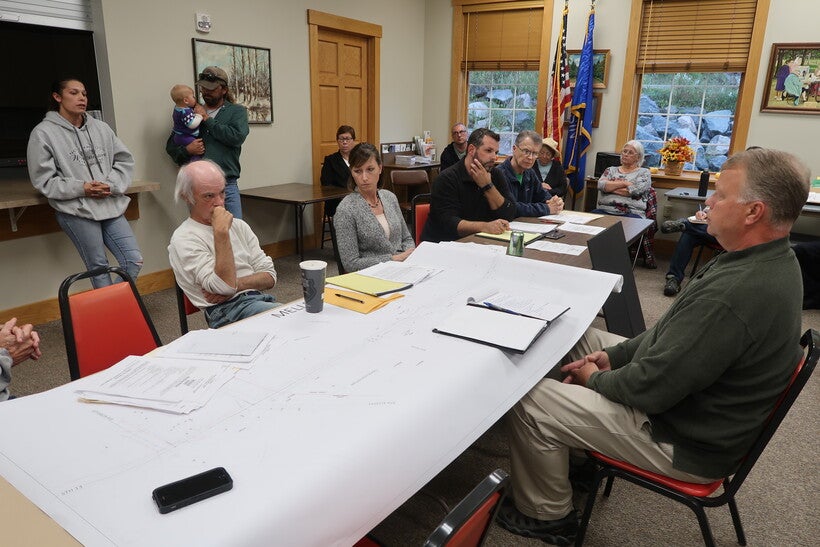 Red Cliff tribal member Sandy Gokee, who goes by the name Wenipashtaabe, said it appeared Enbridge was trying to go around a sovereign nation and neglecting tribes’ treaty rights with the federal government in off-reservation ceded territories.

"Why would you just go upstream some more and threaten my kids’ food — their livelihood?" Gokee said.

"We don't see it as a threat to the water because of all the safety precautions we have in place," Halverson said.

Peter Turney, of Mellen, voiced concerns about the company's ability to use eminent domain to acquire land for a potential reroute, as well as potential impacts to the city’s aquifer.

"This is not a safe thing for the city of Mellen. This is absolutely the wrong way to go," Turney said. "Those pipelines were not meant to be brought in to communities and run through the community. I think the problem is you think these people are poor and they don’t know what they’re doing."

In a phone interview Friday, Enbridge's Smith said the company's goal is to reach agreements with landowners and avoid eminent domain, noting the company acquired easement agreements from all Wisconsin landowners for its Line 3 replacement project near Superior. However, she noted Enbridge is asking permission to access properties for the surveys only to see which routes may be feasible. If the company pursues a project in the future, Smith said the company would announce its plans and begin the permitting process with local, state and federal officials.

"We would also have to go back to the landowners and start talking about potentially coming to agreements on easements," she said. "That whole process is pretty lengthy, and we don't have specific timelines right now." 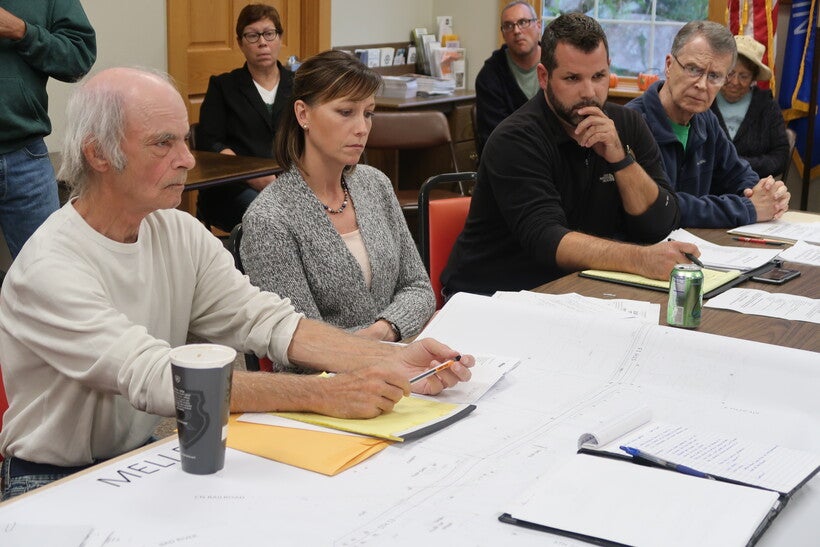 Mellen Mayor Joe Barabe doubted whether city fire and emergency medical services would be able to handle any emergency that may result on Enbridge's pipeline.

"This is like an echo. We just got done fighting (Gogebic Taconite), and all the same reasons we’re looking at this and saying, 'No,'" Barabe said. "It doesn’t make sense."

Halverson said Enbridge has the ability to shut down pumps and flow on the line in the event of any emergency, adding the company has learned much since the 2010 spill in Michigan. He pointed to frequent inspections and integrity digs on the company’s lines to address any issues before they become a problem.

According to the National Wildlife Federation, there have been 33 spills on Line 5 since 1968 as shown by data reported to the Pipeline and Hazardous Materials Safety Administration. Smith said there have been incidents on Line 5 over the years, highlighting the company conducts a full investigation with regulators to improve the safety and integrity of its operation.

"In 2018, we transported nearly 3.9 billion barrels of crude oil petroleum products across our whole system. We had our highest volume in our 70-year history ... with our lowest incident rate ever," she said. "I think that's a testament to all of the investment we've been placing in our system since 2010."

Highbridge resident Jan Penn questioned the company's ability to access its pipeline in the event of the emergency given recent flooding that has washed out roads across northern Wisconsin in 2016 and 2018.

Smith said Enbridge conducts contingency plans along existing and new pipelines that identify safety features, including shut-off valves and spill modeling to project worse-case scenarios. She said those plans also identify resources in the area to address any potential emergencies, which includes emergency response equipment located across its system and nearby oil spill response organizations.

Vincent Mattson, who has property in Marengo, said Enbridge has been repeatedly contacting him and his son to gain approval to access land for the surveys.

"I feel it’s harassment," said Mattson. "I don’t know what part of 'No' they don’t understand.”

Smith said they never want anyone to feel harassed or intimidated, noting they want to forge good relationships with landowners.

Enbridge said the land surveys would address issues related to the environment, civil and cultural resources that may be impacted. The company is speaking with officials in Ashland and Iron counties, as well as private landowners.

No one at the meeting spoke in favor of granting land access. The council didn't take any action on Enbridge’s request.