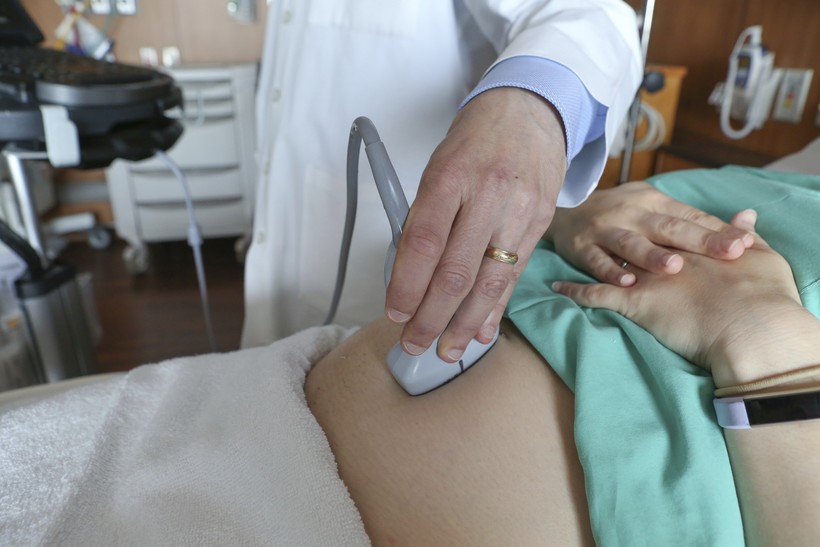 A doctor performs an ultrasound scan on a pregnant woman at a hospital in Chicago on Aug. 7, 2018. Teresa Crawford/AP Photo

'Emotional turmoil': Wisconsin mother shares her struggle in getting care for her miscarriage

Gloria Nash is very familiar with pregnancy. She gave birth to two girls and has worked as a doula and birth coach for many years. When she became pregnant with another baby earlier this year, Nash and her husband were overjoyed, even planning a "babymoon" trip to celebrate.

But at her 12-week appointment, her midwife couldn’t find her baby’s heartbeat.

"This is not super unusual at 12 weeks, because sometimes the placenta is covering it up, and I had literally just heard the heartbeat (at 10 weeks). So I didn't think there was anything wrong," she said.

The mother, who lives in Sharon with her family, went on the trip and continued her prenatal care. At 17 weeks, her midwife again couldn’t find a heartbeat and ordered an ultrasound. The imaging confirmed Nash’s unborn baby had died and had stopped growing at 12 weeks.

Because she had not experienced any signs of passing the pregnancy tissue, Nash’s midwife referred her to an OB-GYN so she could get medication to start the process. But even after viewing the ultrasound, the doctor’s office declined to see Nash.

"They basically told (the midwife) to send me to the ER," Nash said. "I'm not dying. I'm not septic. There's nothing technically wrong with me. So if I went to the ER, I would have to sit there for God knows how long until they see me. And then they're probably going to give me a surgical option, which was not something that I wanted to do."

She tried another doctor's office, which also declined to see her. A third clinic in Milwaukee did accept her as a patient, but said they would have to do their own ultrasound to confirm the unborn child's death because of the state’s 173-year-old abortion ban. After confirming the miscarriage was due to an abnormality that caused the baby’s organs to stop developing, the third doctor prescribed Nash the medicine she needed — misoprostol.

But on her way to the pharmacy, she got a message saying they could not fill the prescription without more information from her doctor. That’s because medications prescribed after a miscarriage can also be used for an abortion. Wisconsin's abortion ban only allows an abortion to be performed if the patient's life is in danger. If a provider performs an abortion for any other reason, they could face felony charges. Experts previously told Wisconsin Public Radio pregnancy loss care should not be impacted by the ban written in 1849.

After bouncing back and forth on the phone between the pharmacy and the doctor’s office, Nash and her husband finally decided to get the medication out of state rather than continuing with the frustration and agony of having to wait. When she finally took the prescription, her unborn child had been without a heartbeat for more than six weeks.

"This was not an elective abortion. This was a highly desired baby that both me and my husband wanted. Like we just went on a babymoon, we were so excited about having this baby together," said Nash, who reached out to WPR's WHYsconsin with her story. "The fact that we had to jump through hoops just to get a basic prescription, it was really frustrating and made the emotional turmoil of the entire situation tenfold worse."

Nash’s story highlights the uncertainty in the state’s medical community around reproductive care and how it’s affecting patients when they experience pregnancy loss or a problem with their pregnancy.

Dr. Kristin Lyerly, an OB-GYN in Green Bay, said there are three ways to care for a miscarriage as a medical provider: remove the pregnancy tissue surgically, an operation known as a dilation and curettage, or D&C, prescribe a medication to prompt the patient’s body to expel the pregnancy tissue or wait for that process to happen naturally through what’s called "expectant management."

"The medical and surgical options are essentially the same thing as abortion care, which is why providers worry about it," said Lyerly, who previously ran for office. "They're afraid they're going to get in trouble for providing the same procedure as an abortion."

Danielle Womack is vice president of public affairs for the Pharmacy Society of Wisconsin. She said her organization is committed to ensuring patient can access necessary medications. But they’re encouraging pharmacists to create additional documentation in order to protect themselves from any legal ramifications.

"There are common medications that, while they can be used to induce an elective abortion, can also be used for a medically-necessary abortion or other medical conditions such as miscarriage, ulcers, and postpartum bleeding," Womack said in an email. "We encourage pharmacists to consult with prescribers and document the purpose of the medication, whether for a medically-necessary abortion or non-abortion purpose."

She said her group is encouraging Wisconsin physicians to include the reason for the medication to prevent a delay in filling the prescription.

Patient advocates say these delays not only can affect someone’s physical health but also impact their mental and emotional wellbeing.

Emily Grorud is president of Bereaved Parents of Madison, a volunteer organization that supports parents who have experienced pregnancy loss, infant death and termination for medical reasons. She said every obstacle that parents run into after losing a baby makes their grief more complicated and harder to bear.

"Every barrier and struggle and challenge that these families face adds up into their grief experience and carries with them through the years," Grorud said. "If the medical community could provide more answers and more direction for these families making these choices, it could help them to some degree."

She said providing clear direction around miscarriage care would also lessen the stigma that people face after a loss.

For some people who have already experienced the pain of a miscarriage, these additional barriers are also making them think twice about trying for another baby.

Lisa from Madison, who didn’t want to share her last name because she's afraid of being targeted for her health care choices, said she had a miscarriage in May, when she was 10 weeks pregnant. It was the second time she experienced pregnancy loss, and she said she didn’t want to wait for the tissue to pass on its own after bleeding for six weeks during her first loss.

"It was fairly traumatic because there was a lot of bleeding," said Lisa, who also reached out to WHYsconsin. "I'd go into work and I wouldn't know when I’d have like a gush of blood."

Lisa said this time she chose to have her doctor surgically remove the pregnancy tissue, which she said was significantly better for her mental health.

"It was more definitive, (there’s a) less likely chance of negative side effects like the cramping and labor-like pains that you experienced with the pill. And with the ultrasound guidance, they can really make sure everything is done," she said.

But Lisa said the procedure wasn't immediately offered to her, even before Roe v. Wade was overturned by the U.S. Supreme Court. She said the emergency room doctor she initially saw was pushing her to "just let it happen" and it wasn't until she contacted her OB-GYN that she was able to get the D&C procedure.

Now that Roe has fallen and the state’s abortion ban is back in place, she’s worried about what her experience would be like if she becomes pregnant and experiences another miscarriage.

"I've already reached out to my personal OB because we are in the process of trying to expand our family, and I've already asked her like how this would be handled in the clinic," Lisa said. "The response I had gotten was that I would still have those options, but it would be a lot harder to get to."

At 35, Lisa said she knows the risk of complications and miscarriage continues to increase with age. With the current state of the law in Wisconsin, she wonders if trying for another baby is worth the mental toll that another miscarriage would take.