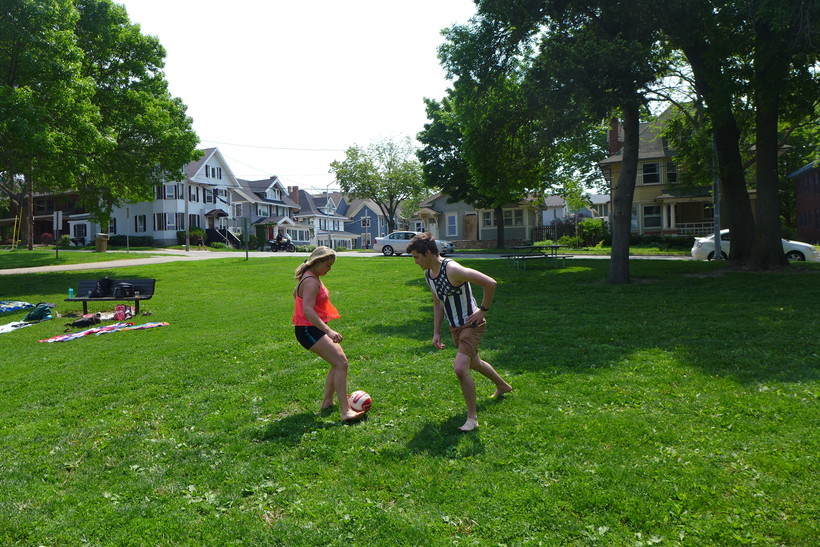 Sharla Boehlke and Adam Arvold kick a soccer ball around at James Madison Park in Madison on a warm day near Lake Mendota. Neither have had heat-related illness, something that a new state report shows is affecting teens and young adults more than any other age group, according to emergency room data from Wisconsin and Minnesota. Shamane Mills/WPR

As summer-like temperatures start to hit Wisconsin, state health officials are out with data showing that extremely hot days over the last decade are taking their toll on teens and young adults.

For years, health officials have advised that extra precautions against the heat should be taken for the elderly, infants and those with chronic health conditions.

But according to a new report, it's teens and young adults who are ending up in the hospital with heat-related illnesses when the mercury rises. Epidemiologists in Wisconsin and Minnesota examined nearly a decade of emergency department data and found that young people were most likely to visit the ER for heat exhaustion, dehydration and other heat-related ailments, such as cramps.

Paul Creswell, an epidemiologist at the Wisconsin Department of Health Services, said that the findings could suggest young people aren't taking heed of the risks that sweltering temperatures can present.

"Groups that don't think of themselves at risk are at risk," said Creswell.  "I think it's common folk wisdom, but it's also been identified in research the invincibility thing that goes with being younger.  They don't necessarily take the precautions."

On Friday when the temperature was creeping up to 86 degrees, Adam Arvold, 21, was playing soccer and frisbee outside with friends at James Madison Park along Lake Mendota in Madison. He said he doesn't change his plans when the heat and humidity gets high.

"I would honestly still go outside. I'm young, I'm stubborn. You know, got to be be young and foolish to be old and wise," quipped Arvold, who is a recent University of Wisconsin-Madison graduate from Cedarburg.

He said he has never been hospitalized for heat-related problems.

But others his age have.

Researchers with the environmental public health tracking program looked at who went to the ER from May to September starting in 2006 until 2015 in each county. They found those between the ages of 15 to 34 were most likely to need medical attention because of the heat. The study also found that more men went to the ER than women. And not surprisingly, counties with a higher heat index generally had more cases of heat-related illness.

An interactive map shows where the heat index got above 90 degrees. In 2013 for instance, Sheboygan County had nine days of extreme heat, the most in the state that year. Looking back to data from 1979, there was only one day where the temperature and humidity increased the risk for heat-related health problems. The numbers can vary widely from year to year. For instance, Dane County had eight extremely hot days in 1993. But there were only three of those days in 2013.

Heat-related illness was significantly higher in rural counties. That despite the known risk of living and working in cities where concrete and asphalt absorb and hold heat.

"What we found interesting was that the counties where we have dense populations were actually less likely to have (heat-related emergencies). Why that is we don’t know," said Creswell.

He speculated that people in rural areas have jobs where they're more likely to be outside during the hottest part of the day.

Researchers noted there still needs to be concern for elderly and very young during intense periods of heat, but that warnings should also extend to other groups for whom heat can be debilitating or deadly.