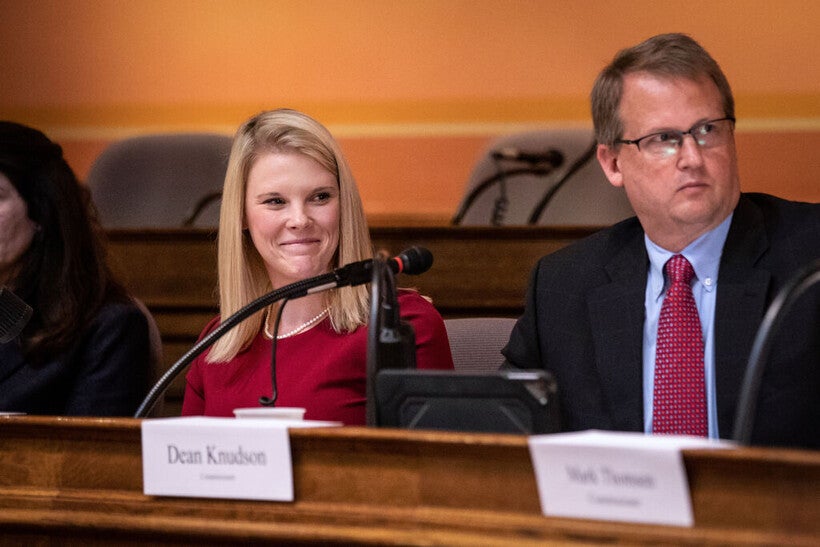 The Wisconsin Elections Commission has delayed a vote to pick a new chair after Republican Commissioner Dean Knudson abruptly announced his resignation from the six-member panel, saying it had been made clear to him "from the highest levels of the Republican Party" that they didn't want him to lead the body.

Knudson, a former Republican state lawmaker who was appointed to the WEC by Assembly Speaker Robin Vos, made the announcement Wednesday, just moments before commissioners were scheduled to vote on a new chair.

Knudson said he would put his conservative record up against anyone in Wisconsin, but said he'd been branded a "RINO" for his work on the commission, referencing the acronym that stands for "Republican In Name Only." Knudson said that was partly because of the way he values personal integrity.

Knudson said fraud happens in every election, but not on a large scale as the former president has falsely asserted.

"And unfortunately now, elected officials, appointed officials and candidates at the highest levels in my party have refused to believe that President Trump lost," Knudson said. "Even worse, some have peddled misinformation and perpetuated falsehoods about the 2020 election. This is really unfortunate because Republicans across Wisconsin did just fine at all other levels in the 2020 election."

As a Republican lawmaker, Knudson was instrumental in passing the bill that created the Wisconsin Elections Commission to replace the Government Accountability Board. Unlike the GAB, which was run by a panel of nonpartisan retired judges, the WEC was set up as a bipartisan commission, split evenly between three Republican appointees and three Democrats. Two of those six commissioners are required to be former clerks, with one coming from each party.

Under the law that created the agency, the chair of the commission switches back and forth between Republicans and Democrats every two years, and the clerks are excluded from holding the job. Because the current chair is Democrat Ann Jacobs, that meant the next chair had to be either Knudson or Republican Bob Spindell.

Spindell has vocally criticized decisions by the Elections Commission, earning him praise from some of Trump's most strident supporters in the Republican Party's grassroots. Following the 2020 election, Spindell was also one of 10 Republicans who posed as presidential electors, leading some Democrats to call for his removal from the WEC. More recently, a group of plaintiffs that includes Wisconsin's Democratic electors, has filed a lawsuit against Spindell and the other false electors.

Republican state Senate Majority Leader Devin LeMahieu, R-Oostburg, who reappointed Spindell to a term ending in 2026, has rejected those calls as political theater.

Once the vote for commission chair was scheduled, Spindell began campaigning for the position in the press, telling reporters he planned to seek the job. Knudson, meanwhile, remained silent.

Knudson said he wanted the vote for commission chair to take place before the panel considers challenges to nominating petitions next month, saying that would ensure that Republicans were represented. But he said some in the GOP took that as a sign that he was trying to win the job over Spindell.

"It's been made clear to me from the highest levels of the Republican Party in Wisconsin that there was a deep desire that I not be chair," Knudson said. "And that's fine."

Despite Knudson's announcement, Spindell sought to hold the vote for chair immediately, saying he would bring transparency to the agency.

"We have had close to half the people in Wisconsin believe and believe very strongly something was – is – very wrong with the elections," Spindell said. "These Wisconsin citizens are entitled to know whether or not there were problems with the elections."

Spindell also pledged to work with Michael Gableman, the former Wisconsin Supreme Court justice chosen by Vos to lead a Republican investigation of the 2020 election. Gableman has suggested lawmakers consider trying to decertify the 2020 presidential election, a move election law experts including the Legislature's own nonpartisan attorneys, have said isn't possible.

Jacobs, who has frequently sparred with Knudson, called his comments Wednesday "heartfelt and incredibly brave."

"You and I have not always seen eye to eye on this commission," Jacobs said. "But I feel we have, at our best worked very hard together across the aisle to make sure that Wisconsin has fair, safe and accurate elections."

Commissioners voted 5-1 to delay the vote for chair until the next WEC meeting. Spindell was the lone commissioner to vote no.

Knudson said it had been his intent to leave the commission soon. His appointment was scheduled to last until 2024.

A spokesperson for Vos, who will appoint Knudson's replacement, didn't immediately respond to an email seeking comment.

Republicans have attacked Knudson for decisions he made with other commissioners in 2020 to run elections amid the COVID-19 pandemic, including when he voted to suspend the use of special registration deputies in nursing homes.

Knudson said Wednesday that he had no intention to disparage the Elections Commission, which he said should be retained. The Republicans running for governor have called for its elimination.

In what might have been his last meeting as commissioner, Knudson suggested Republican candidates should focus on issues that affect peoples' pocketbooks.

"It's time to pivot away from conspiracy theories to kitchen table issues," Knudson said. "It's become clear to me that I cannot be effective in my role of representing Republicans on the commission."