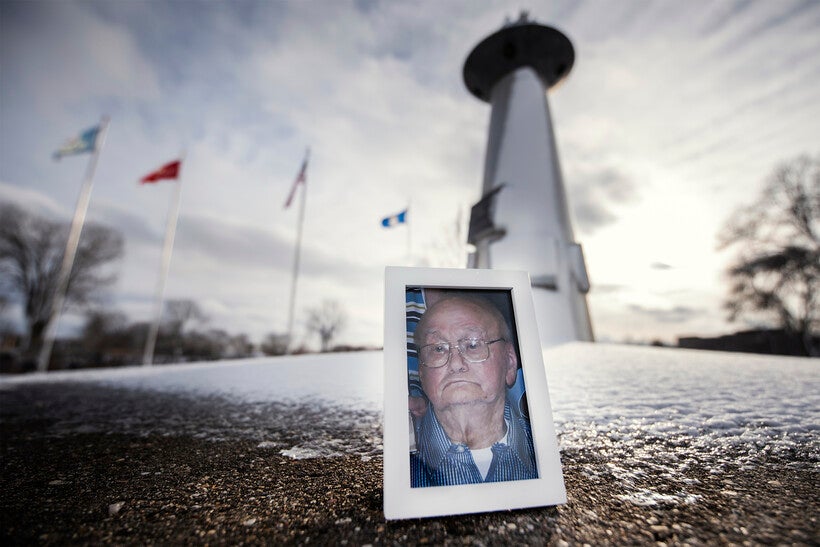 World War II veteran Edward Anderson was 97 when he died of COVID-19 in November. Angela Major/WPR

Edward Anderson, WWII Veteran Who Spent Months As Prisoner Of War, Dies Of COVID-19 At 97

Throughout his march across Germany as a prisoner of war, Edward Anderson kept a secret diary. He recorded places, dates and conditions he and other U.S. Army troops faced. He had to keep it secret from the Nazi guards, or risk being shot.

It was 1944. The war in Europe was nearing its end when Anderson was captured in Belgium during the Battle of the Bulge. The monthlong battle involved a sprawling front across Germany, Belgium, France and Luxembourg. In many ways, it would be the last time Adolph Hitler and Germany had any chance of fending off Allied troops’ advances. 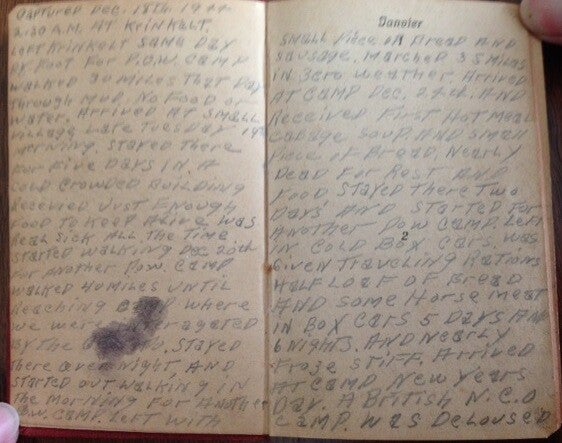 A page from Edward Anderson's journal of his time as a prisoner of war in World War II. Courtesy of Mark Erickson

After the war, Anderson returned home to his father’s dairy farm in Barron County. He would later take it over himself. He wasn't a talkative man, and he rarely talked about his time in the war. His daughter, Sandra Cherney, was an adult when she learned that he had been a prisoner of war. His diary is one of her most precious possessions.

Anderson was 97 when he died of COVID-19 in November, one of more than 4,000 Wisconsinites who've died from the disease. Cherney said she doesn't want her father remembered as a victim, or known only for how his life ended. At the same time, she feels cheated out of additional years with her dad. She's 74 and lives in Texas, but was video chatting with him regularly in his Eau Claire nursing home, and planning to visit him in summer 2021.

His death, she said, makes her "want to get to the top of the cellphone towers (in Wisconsin) and say, 'Listen, people! This is serious!'"

'Dad Showed His Strength From Day One'

Anderson was born in 1922 in the Barron County town of Almena. Like many babies then, he was born at home. But he was premature, his daughter said, weighing only 3.5 pounds. The family didn't think he'd survive. An aunt baptized him. They wrapped him and put him in a shoebox, and put him on the oven door in the chilly farmhouse.

Just by surviving, Cherney said, "Dad showed his strength from day one."

He grew up on his father’s dairy farm, where he was friends with workhorses Doc and King. He was a skilled carpenter, and built tables and chairs for the Longfellow School that he'd attended.

Anderson was 19 years old when Japanese fighters bombed Pearl Harbor. He was drafted into the Army a little over a year later.

Wayne Erickson grew up not 10 miles away from Anderson, but the two men didn't meet until they were both captured and put together as POWs. They were among some 2,000 American soldiers forced to march hundreds of miles between prison camps, because the facilities were full. The Nazis expected many of their American prisoners to be worked to death, and they showed little care for their health.

"Our food at this time consisted of a cup of lukewarm, odd tasting tea in the morning and a bit of grass soup when we stopped for the night," Erickson wrote in an account published in the 2015 book "The Heroes of Hosingen." German guards "would fire on any of us who tried to pick frozen vegetables out of the fields or gardens along the roads ... We drank water from the ditches."

By the time they were liberated by American troops in April 1945, both Erickson and Anderson weighed less than 100 pounds.

On the back of his diary, Anderson wrote a list of foods he imagined eating when he got home: tapioca pudding, apple pie, Wisconsin cheese.

"A lot of ordinary foods," said Cherney, "but they were things he hadn’t had for a long time."

A Quiet Man Who Received Recognition Near End Of His Life

Anderson was discharged from the Army on Sept. 22, 1945. He was a staff sergeant. He married his wife Patricia in 1946. They had two kids, Sandra and her younger brother Lee, who died in a motorcycle crash in 1973. Patricia died in 2009 from cancer.

Anderson was a small man — 5-foot-8, 150 pounds — but he was wiry. In addition to milking 15 cows on his farm, he drove a milk truck. That meant loading and unloading 100-pound milk cans at the creamery. 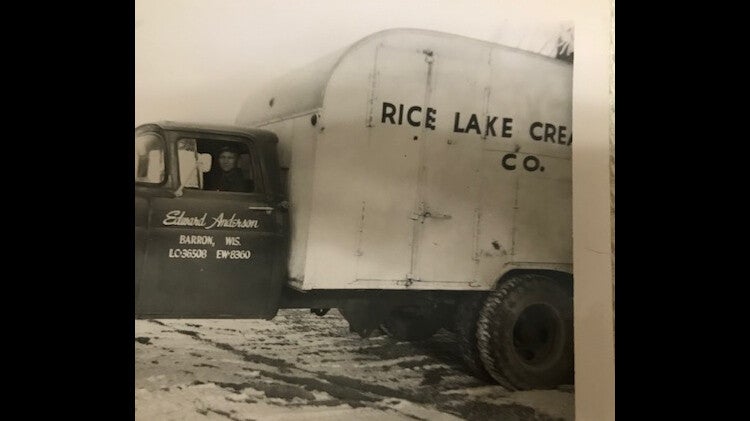 After the war, Edward Anderson drove a milk truck in addition to running his own dairy farm. Courtesy of Sandra Cherney

Cherney's main memory of her father when she was a child was that he was always working. But when she was an adult, they became closer. Even after she and her husband moved to Texas, they visited Wisconsin every summer, and it was something she looked forward to.

By 2016, Anderson couldn’t walk much and mostly used a wheelchair. He was living in the Barron assisted living center Monroe Manor when representatives from the Barron County Veteran’s Service office and then-U.S. Rep. Sean Duffy held a ceremony to present him with a POW medal. Cherney said she wasn’t sure whether her dad would even agree to have the ceremony. In the end, she said, he enjoyed it, and it helped members of the family to learn more and connect to his time in the war. But he kept his usual reserve.

"When we asked Mr. Anderson if he had anything to say that day, he said, 'No,'" said veterans service officer Scott Bachowski. "That was about the only word he spoke. I think he didn't like the limelight." 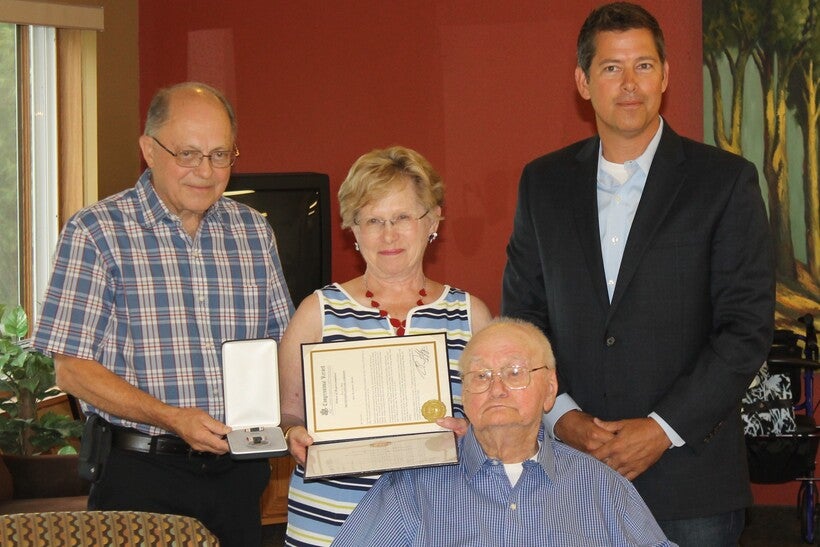 Anderson spent this year under lockdown at his nursing home in Eau Claire. Because older adults are particularly at risk of developing severe symptoms from COVID-19, nursing homes across the country have barred visitors, limited in-person socializing and taken other precautions. But the virus is persistent, and especially in places where community spread of the coronavirus is high, even those precautions aren't enough. 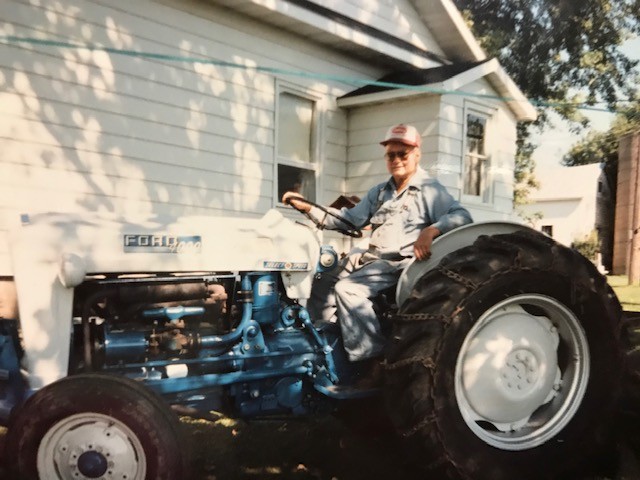 World War II veteran Edward Anderson milked 15 cows in Barron County and drove a milk truck after the war. Anderson died of COVID-19 in November. He was 97. Courtesy of Sandra Cherney

In early November, Wisconsin was experiencing a spike in new infections that was among the worst in the nation. Cherney, who had a regular videoconference with nursing home staff, was looking ahead to Anderson's 98th birthday. In a normal year, family members would visit. This year, no one was allowed in.

"So we talked about the balloons and the cupcakes they could make ... to make Dad's birthday special," Cherney said. "By 5 that afternoon, they called me. They said, 'Your dad’s running a fever. We're going to do the fast test,' which they did, and he was positive."

Anderson had COVID-19. After that, he got very sick, very fast. The doctor told Cherney he might not live through the night, but he did.

"I FaceTimed with him in the afternoon of the next day," Cherney said. "And he lived one more day. He lived 48 hours after he contracted the virus."

Anderson died two weeks before he would have turned 98.

At his age, Cherney of course knew that her father could die at any time. But it was still a shock, and she's still heartbroken. She said it's hard not to be angry at those who haven't taken seriously the threat of COVID-19, or the costs it inflicts on families — even when those who died have had long lives, as her father did.

"We usually come up each summer and visit family and spend time in Wisconsin — that was one of the highlights of the summer," Cherney said. "We didn't get to do that this summer, because it wasn't safe. ... And now he's gone."