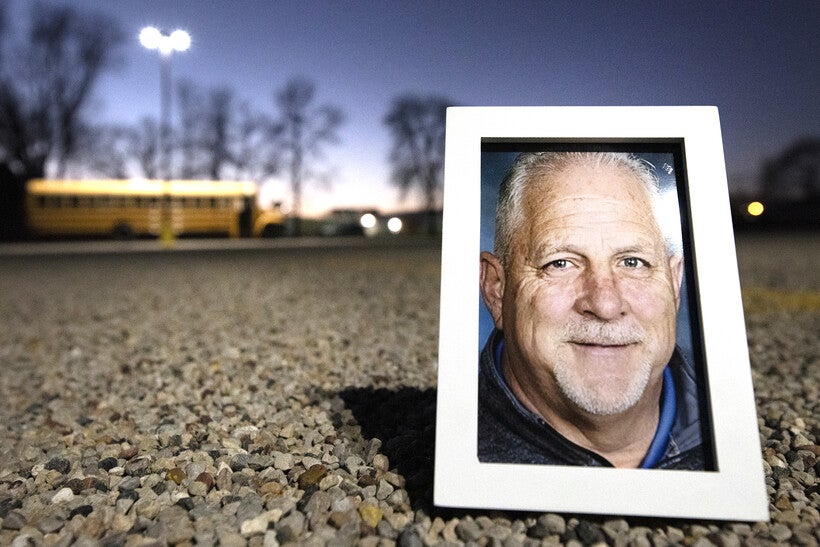 Duane Bark was the Markesan schools superintendent. He died in October after contracting the coronavirus. Angela Major/WPR

Duane Bark was nearly late for his wedding. He went golfing with the minister that morning, and they left the course later than intended. When Pam, the bride-to-be, showed up at the church carrying her dress, the door was locked because the minister had the key. 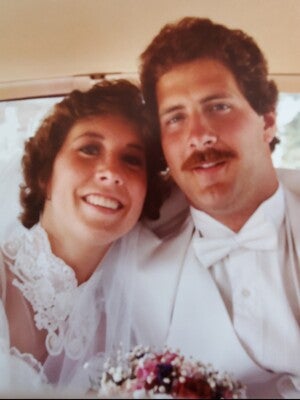 Duane and Pam Bark are shown on their wedding day, June 12, 1982. Pam’s father surprised the couple with a ride in a golden Cadillac he borrowed from a friend who owned a car dealership. Photo courtesy of Kim White

"I'll never forget when I was beating at the door. They were whisking around to open the church up so I could get in," Pam Bark remembered with a chuckle.

Those were among many laughs over the next 38 years.

Duane, a Lancaster native, was a joker with a knack for cutting tension — a useful skill for an educator and football coach, two of his great passions. He and Pam moved around in their early years — from Wisconsin to Missouri to Iowa and back again. Duane built a career as a teacher and climbed the ranks to vice principal and principal. His final stop was superintendent and athletic director at Markesan District Schools.

His mother Jill Bark recalled that a family friend gave Duane a personalized football — his first gift as a baby — even before she brought him home from the hospital. The friend initially misspelled Duane’s name, prompting a run to pick up shoe polish to add the missing "e." Duane would continue that tradition for his children, while getting the spelling right the first time. His sons Bradley and Brian each received a football at birth. Brittany, his daughter, got a volleyball.

Brittany, the youngest, could do no wrong in her father’s eyes. All the siblings knew it. It’s why they made her take the blame when they caused trouble. Duane started painting Brittany’s nails when she was 2, a special bonding time that stretched throughout her childhood; he even prepared her nails for homecoming and prom.

Duane also painted Brittany’s nails in June, allowing her to avoid potential COVID-19 exposure at a salon. Lingering specks of purple on her toenails remind her off that last father-daughter ritual — mere weeks before Duane’s COVID-19 diagnosis and before he became one of more than 4,000 Wisconsinites to die from the disease that upended the world in 2020.

All of Duane’s children participated in football practices, even before growing old enough to suit up.Duane coached both sons over the years, including while working under Mike Emendorfer, the University of Wisconsin-Platteville head coach. Brian, the middle child, began as a waterboy. That job turned treacherous when he was picking up water bottles one practice and a stampede of high schoolers ran him over. Duane arrived in an instant to offer comfort. That summed up his father, Brian said: a guy who would always pick you up when you most needed it.

Pam agrees with that assessment of her husband. 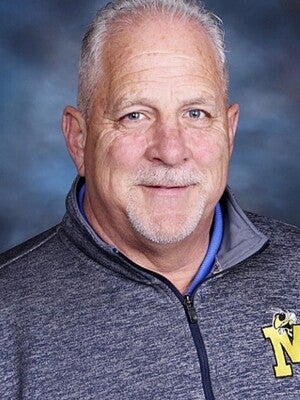 She noticed over the years that shoes, coats and other necessities would go missing from their house. Without ever talking to him about it, she knew Duane was sending them to folks who needed them more. He never wanted recognition for his generosity, she said.

Duane held great strength in his ability to relate to anybody, said Greg Gard, the UW-Madison men’s basketball coach and a long time friend of the family.

"You sharpen that saw as a coach because you're doing it with your students — and as a teacher," Gard said. "To be able to translate that and have an even broader impact as an administrator is obviously a great tribute to (Duane)."

Duane continued to mentor those around him into his days as an administrator, his loved ones recall. That included encouraging two of his teachers in Prairie du Chien, Andy Banasik and Guy Kopp, to continue their own educations and enter into school leadership. Pam contributed by babysitting Guy’s young daughter, allowing him to drive two hours to Winona, Minnesota for classes. Today, Banasik is the superintendent and athletic director in the Prairie du Chien School District, and Kopp is head football coach at Cuba City High School.

When the pandemic whirled into Wisconsin in March, Duane began steering the Markesan community through scary, uncertain times. As superintendent, he invited struggling families to reach out.

"Even if it’s a personal need. If you have a situation where you need to talk to somebody or you need something, please, please call us," he said in a video message.

The coronavirus reached the Bark household in the summer during a visit from a family friend who had falsely tested negative. The friend made it clear he was going to bars after a court lifted Gov. Tony Evers’ "Safer at Home" order, Brian said.

Everyone in the house got sick: Duane, Brittany, Pam and Pam’s mother. Duane checked into the hospital on July 23, his 61st birthday.

Duane had no underlying conditions before catching COVID-19, according to his family. But by August, he relied on a ventilator and lay in a medically induced coma. The scene was surreal, said Bradley, the oldest son.

Duane fought for months, but by October, his death was imminent.

His family gathered around his hospital bed one last time, his mother Jill and sister Kim joined by FaceTime. Bradley read comforting Bible verses. When he punctuated The Lord’s Prayer with an "Amen," Duane opened his eyes for the first time in over a week, Bradley said.

"(There were) tears coming out of his eyes," Bradley said, "and he flatlined at that point."

"It was extremely sad and comforting, too. We know where he’s at right now. That’s the part that gives me some hope … We were by his side," Bradley said. 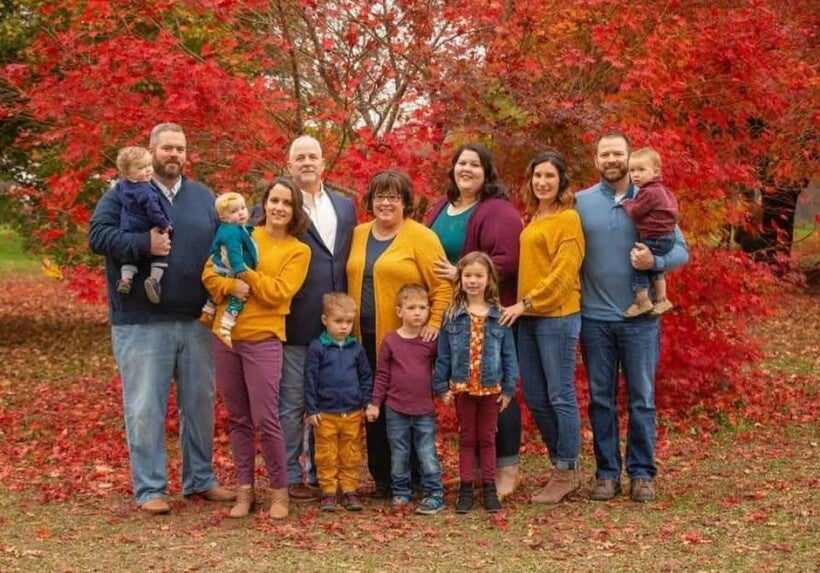 Duane Bark, wearing a blue blazer, fifth from the left, with his family in 2019 in Madison. Photo courtesy of Bradley Bark

Pam has yet to fully adjust to the loss. Some days, she said, she feels like she’s waiting for Duane to return home.

"My mind tells me with my faith, I know where he's at — I know he's in Heaven," she said. "My heart just hasn't caught up to it yet. And that's the part that's going to take time — is my heart, because it's awfully broken."

Nevertheless, mentions of the golf game 38 years ago that nearly made Duane and his minister late for his wedding still draw a laugh — even through the family's tears. The story encapsulated a life built on sports, faith and family.