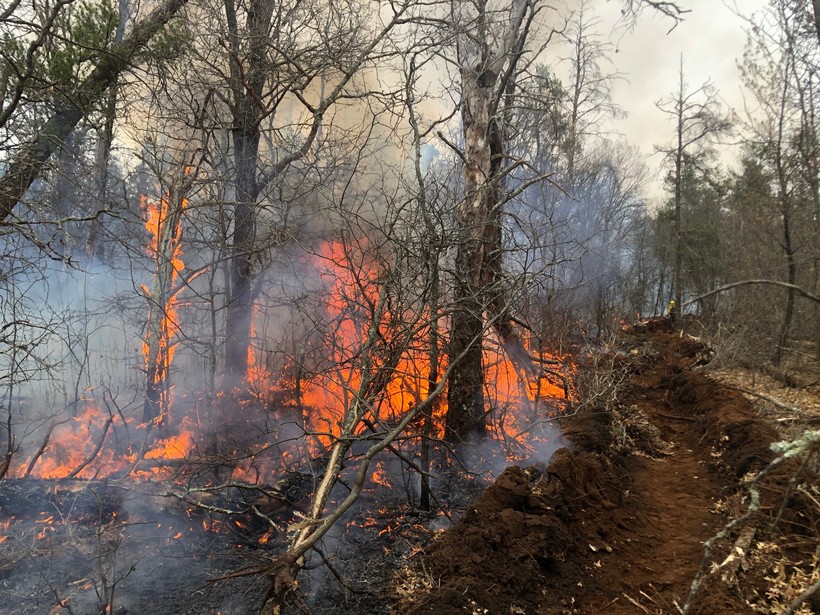 A fire in Burnett County that burned about 4 acres Saturday, May 9, 2020, was caused by someone throwing hot ashes from a wood stove or fireplace into the woods. Photo courtesy of the Wisconsin DNR

DNR: Wisconsin Is Well Ahead Of Its 5- And 10-Year Wildfire Averages

There’s a high risk for wildfires this weekend in Wisconsin, according to the state Department of Natural Resources (DNR).

"Currently, we have very high fire conditions across the state of Wisconsin today," he said Friday.

The DNR has positioned fire suppression resources at ranger stations across the state. All available staff were called in through the weekend, he said. The DNR suspended burning permits Friday in all 43 counties under its authority.

Warmer temperatures are expected over the weekend, which can contribute to fire danger, Martin noted.

The DNR is asking Wisconsinites not to burn their debris piles, the largest cause of wildfires in the state. Campfires for warming or cooking are allowed but not recommended, officials said.

Anyone who does have a bonfire this weekend should clear the area around the fire, keep it as contained as possible and burn in the evening, when winds usually subside and humidity rises, said wildfire prevention specialist Catherine Koele.

Over the last week, 55 fires have burned more than 200 acres in Wisconsin, Koele said. Eight fires were burning in Wisconsin on Friday afternoon, according to the latest update from the DNR.

On Saturday, the DNR said more than 250 wildfires had been reported across the state this year, burning more than 1,000 acres. That includes a wildfire in Menomonee Falls on Friday that burned nearly 450 acres, leading to the evacuation of some homes in the area. The fire was contained by Friday evening.

"Our fires are very small typically, so we don’t have those big long-range fires that you typically see out West, but we do have a lot of them, and they can be prevented," she said.

Wildfire season in Wisconsin typically lasts from when the snow melts until foliage returns in May or June, Martin said. With an early spring this year, Wisconsin is already ahead of its 5- and 10-year averages for total wildfires and acres burned, according to the DNR.

"We went snow-free statewide at the same time. Typically, in more traditional years, it’ll start in the south and then progress north as that snow melts, so that’s why this year is a little bit different," Koele said.

The amount of rain Wisconsin gets in the coming weeks will determine whether the trend continues, Martin said.

The DNR may bring in extra aerial support from the Wisconsin National Guard to assist with wildfire suppression this spring, Martin said. Those decisions will be made based on where the fire is located, where it’s heading and what’s at risk of being destroyed, he said.

Ground fires, driven by grass, are most common this time of year. Later in the spring when trees dry out, they also become more susceptible to wildfires, Martin said.