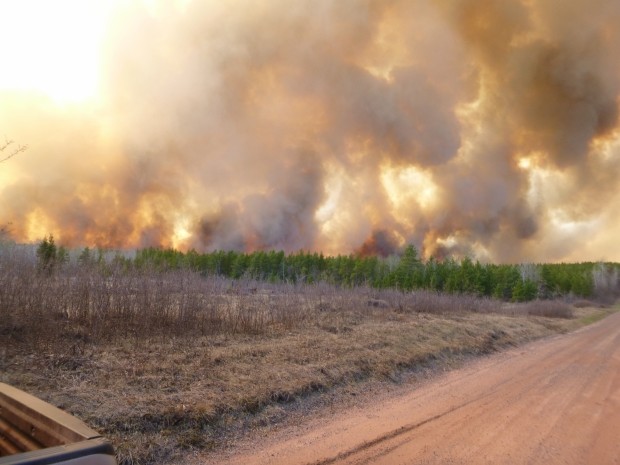 The Germann Road fire in northern Wisconsin in 2013 is the largest wildfire to hit the state in over 33 years. The fire consumed 7,499 acres and was started unintentionally from a logging crew harvesting timber on industrial timber lands. Photo courtesy of the Wisconsin Department of Natural Resources

Why Doesn't Wisconsin See Large, Intense Wildfires Like Out West?

Wisconsin Fires Tend To Be Much Smaller, But Major Fires Have Happened
By John Davis
Share:

As record wildfires scorched millions of acres of land in the western United States in the late summer and fall of 2020, it prompted a question about wildfire season in the Badger state.

As of mid-October 2020, more than 45,000 wildfires accounted for 8.3 million acres of damage in California and the Pacific Northwest alone, according to a U.S. Geological Survey report. Colorado has also been decimated by wildfires.

About 60 forestry staff from the Wisconsin Department of Natural Resources were in California, Oregon and Colorado in September helping fight the wildfires, aid they often provide out West as needed.

DNR wildfire prevention specialist Catherine Koele has made about 10 trips out West. She said there’s no comparison when it comes to fire conditions out West and those in Wisconsin.

"In the West, the fuels, the vegetation type, the fuel loading, the density of the fuels, the moisture content, weather patterns, topography and even the fire causes are significantly different than what we see here," she said.

"The vast majority of those fires (in the West) are caused by lightning events, where they have lightning that’s not followed by rain," Koele continued. "Typically, in Wisconsin, when we have lightning, we see rain. We have a lot of green, lush vegetation. (Wisconsin) might have a day or two in the spring with red flag conditions, a couple of counties here and there. But to see those long-term red flag warnings (that are seen in the western states), we just don’t see that here."

That doesn’t mean Wisconsin doesn’t have numerous wildfires to contain in a given year.

Most happen in the spring and summer.

While the 2020 wildfire season in the western U.S. has killed dozens of people, displaced hundreds more, destroyed hundreds of structures and burned millions of acres, Wisconsin had more than 600 wildfires in the first 10 months of the year. These were smaller fires that damaged a little more than an acre apiece on average. 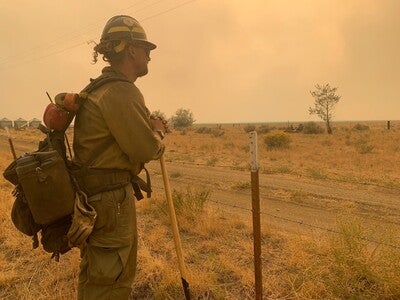 On Sept. 13, 2020, firefighters scout for safety routes and monitor fire behavior during strategic firing operations for the Brattain Fire in Paisley, Oregon, which burned about 50,000 acres. Photo courtesy of the Wisconsin Department of Natural Resources

Still, Wisconsin does have a history of occasional large wildfires.

The last one happened in May 2013 in Douglas and Bayfield counties in northern Wisconsin. Known as the Germann Road fire, it burned 7,500 acres and destroyed 23 homes. Firefighters from dozens of agencies fought the fire for more than a day. It was found to be started unintentionally by a logging company working in the area.

Eric Martin is a DNR forest fire prevention specialist and was an incident commander for the Germann Road fire.

"A lot of it was a little bit unexpected because we had 23 inches of snow 10 days prior to that fire," Martin said. "We still had snow in some of the ditches that next morning. The morning of the fire, it was raining. It was a relatively wet period. By noon, (the day the fire started) it was crunchy in the woods and it was drying off very fast. 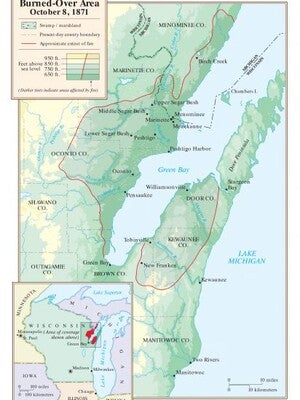 Map depicting the burned over area created by the Peshtigo fire Oct. 8, 1871. The map includes the inset of Wisconsin and surrounding states with a detailed of area impacted by fire. Photo courtesy of the Wisconsin Historical Society.

"Germann wasn’t exactly the biggest fire that I’ve ever been on. It wasn’t exactly the worst fire, though it was very bad for the folks it affected," he continued. "I’m used to traveling to other places to fight those types of fires. This one was right in my backyard and it was my friends and neighbors it affected."

The worst wildfire in Wisconsin history and still the deadliest wildfire in U.S. history was the Peshtigo fire north of the city of Green Bay in October 1871.

According to the DNR, 1,200 people, including 800 in Peshtigo, died in the fire that tore through 1.2 million acres of land on both sides of the water known as Green Bay. Other accounts suggest many more people died in the fire.

National Fire Prevention week is held each year in October in large part because of fires in the Great Lake states, including the Peshtigo fire.

"We talk about it in terms of historic fire and what could happen. We talk about it in terms of land management and land use," he said. "Keep in mind, in 1871, they had a historically dry, dry, dry summer that led into their fall fire season. We always look at some of these past patterns and watch out for the next large fire event, especially when we have some of these (sleepier) days in fall." 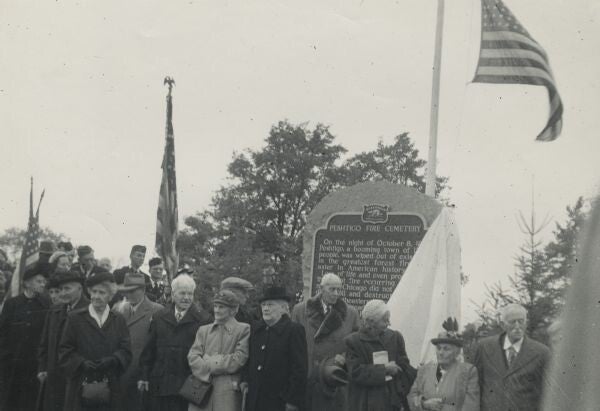 A group of survivors of the Peshtigo fire of 1871 are gathered in front of the Peshtigo Fire historical marker. The marker dedication coincided with the 80th anniversary of the fire. Photo courtesy of the Wisconsin Historical Society

Koele said most Wisconsin wildfires can be avoided.

"Ninety-eight percent of our fires are caused by people; therefore, they can be prevented," she said. "I think that’s the key message we want to get out to the public is that our fires don’t have to happen."

The DNR has required burning permits since 1925 for people who want to do their own burning in all or parts of forest fire protection areas in northern and central Wisconsin. Local municipalities often have their own rules that govern starting a fire.

The agency also discourages burning in the spring and recommends the safest time to burn debris piles is when the ground is completely covered by snow.

Scientists who’ve studied conditions out West have said hotter and drier conditions have played a role in greater wildfire risks.

Koele said Wisconsin has been in a wet pattern for the past decade that has reduced the wildfire chances.