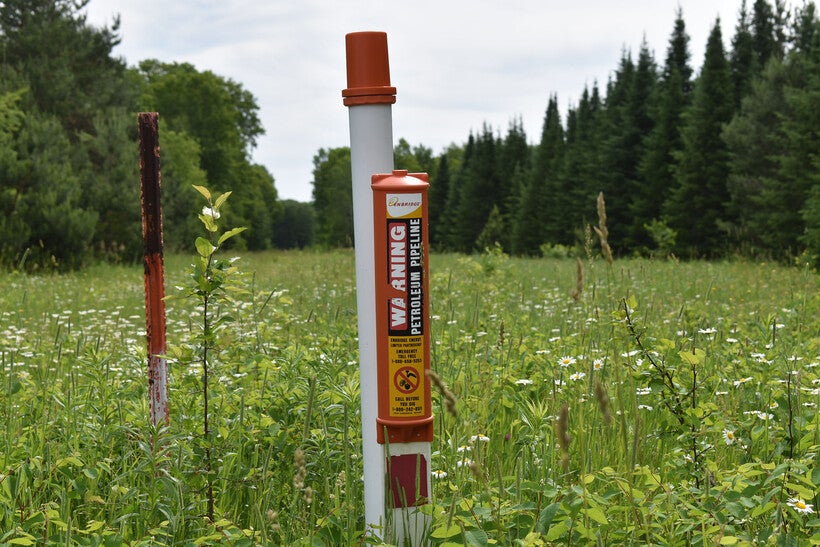 Company made repairs after detecting crude oil staining and has since restarted the pipeline
By Danielle Kaeding
Updated:
Friday, August 12, 2022, 3:10pm
Share:

For the second time in a week, a Canadian energy firm shut down a pipeline near the Bad River tribe’s reservation — this time to investigate crude oil staining on a weld of its pipeline.

On Wednesday, Enbridge Inc. notified state regulators that it had shut down its Line 5 pipeline in an area near Ashland where the company reported contaminated soil last week, according to Trevor Nobile, a field operations director with the Wisconsin Department of Natural Resources. The pipeline spans around 645 miles and carries up to 23 million gallons of oil and natural gas liquids daily from Superior across northern Wisconsin and Michigan to Sarnia, Ontario.

"The notification that we received in the information that was provided to the department on the evening of Aug. 10, it was described as a small area of staining on a pipe on a weld was discovered, and that Line 5 had been shut down so crews could evaluate and make repairs," Nobile said.

Enbridge made the report around 5 p.m. Wednesday, and a DNR conservation warden visited the site at 10 p.m.

"No material was released to soil or water at this time, based on the information provided," Nobile confirmed.

The conservation warden didn’t observe any petroleum odors, stained soil or any water at the time of the site visit.

An Enbridge spokesperson said repairs have since been completed, and the pipeline resumed operation Friday morning.

"The cause of the stain is being investigated," said Juli Kellner, an Enbridge spokesperson.

Enbridge notified the Pipeline Hazardous Materials Safety Administration about the repairs and the Bad River Band of Lake Superior Chippewa.

Last week, Enbridge shut down Line 5 for three hours on Aug. 3 after crews conducting maintenance spotted a tablespoon of oil that had spilled from a valve site in the Ashland County town of Gingles. The site is about 1 mile from the reservation of the Bad River tribe. 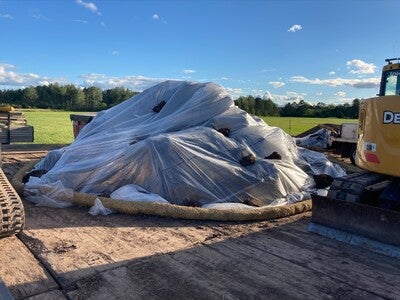 A stockpile of excavated soil that's suspected of contamination at a valve site for Enbridge's Line 5 pipeline near Ashland. Photo courtesy of the DNR

Enbridge and the DNR said no active release occurred, and the pipeline resumed operation the same day. The discovery led the company to excavate soil that’s suspected of contamination.

"Enbridge crews continued to investigate the origin of impacted soils through the weekend, and removed the impacted soils following our protocols and regulatory requirements and are working with the WDNR on next steps," Kellner said. "It is believed to be historic in nature, as crews found no indication of an active release of crude oil or natural gas liquids from the pipe or fittings."

Enbridge said the soils are bound for an approved facility for disposal after testing.

The DNR has said the energy firm will be required to document all actions taken to address any contamination.

The potential spill comes as Enbridge is proposing to route Line 5 around the reservation after the Bad River tribe sued the Canadian energy firm to shut down and remove the pipeline from about 12 miles of tribal lands.

The company is proposing the $450 million project as the tribe’s legal challenge has drawn on for several years in federal court. The company’s plans have generated support from business groups, labor unions and Republican lawmakers. But tribal and environmental advocates oppose Enbridge’s plans, and have criticized the DNR’s draft environmental review of the project as incomplete and flawed.

The U.S. Environmental Protection Agency also said the state’s review failed to fully analyze the project's impacts and how it may harm environment and tribal resources, including failure to fully disclose the risk of spills.

Last year, the DNR alleged Enbridge violated Wisconsin’s spills law for not promptly reporting a release that occurred on its Line 13 pipeline in Fort Atkinson on April 26, 2019. State law requires entities to immediately report discharges of hazardous substances by calling the DNR’s 24-hour hotline. Enbridge didn’t report the discharge to state regulators until more than a year later on July 31, 2020.