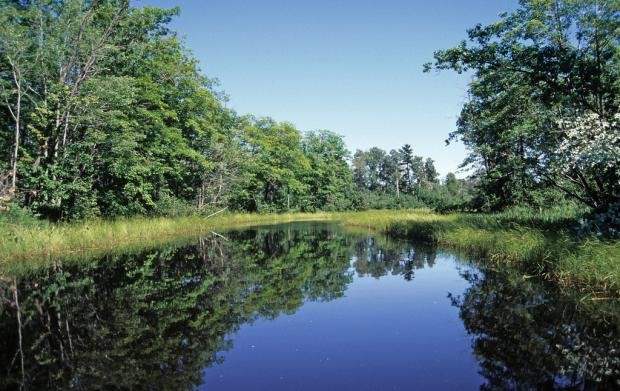 The Bad River Band of Lake Superior Chippewa filed a federal lawsuit against energy firm Enbridge on Tuesday. The northern Wisconsin tribe wants the Canadian company to shut down its more than six decade-old Line 5 pipelines running through the tribe's reservation.

Line 5 carries up to 540,000 barrels of natural gas liquids and crude oil per day from Superior to Sarnia, Ontario, Canada. The dual pipelines cross through roughly 12 miles of the Bad River tribe's reservation.

Bad River Tribal Chairman Mike Wiggins Jr. said the tribe asked Enbridge to shut down Line 5 during the spring thaw over concerns it might rupture.

"The river is scouring the bank away and is only about 20-some feet away from the pipe," said Wiggins. "Enbridge rejected the notion of shutting the oil flow down to protect our river and Lake Superior."

Bad River Tribal Council member Dylan Jennings said the Bad River is moving towards the pipeline at an alarming rate due to erosion, threatening to expose it.

According to the complaint, Line 5 was 320 feet from the north bank of a meander in the river in 1963, but now, the riverbank is only 28 feet from the line.

"We want the pumping of oil through our reservation boundaries and through our watershed to cease immediately," said Jennings. "We're not convinced that Enbridge has the best interest of our community in mind when operating Line 5. We need to do and take action to protect our people, our assets and our resources."

The Bad River Band passed a resolution in January 2017, deciding that the tribe wouldn't renew easements on some tracts of land for Enbridge’s Line 5. Since then, the tribe and Enbridge have been engaged in multiple years of mediation over the easements and operation of Line 5. Those easements expired in 2013.

Enbridge spokeswoman Juli Kellner said in an email on Tuesday that the company needs time to review the lawsuit.

"Enbridge has been in good-faith negotiations with the Bad River Band of Lake Superior Chippewa Tribe regarding these easements since 2013," wrote Kellner. "The vast majority of Enbridge's right of way through the Bad River Reservation is covered by either perpetual easements on private land or a 50-year agreement between Enbridge and the Band, which does not expire until 2043."

However, Wiggins said any of the agreements don't account for the severity of the storm events the area is seeing. In July 2016, the Bad River spilled over its banks, displaced people from their homes and disrupted east to west travel on a major northern Wisconsin thoroughfare.

"They don't account for and calculate in the changing dynamics in terms of bank erosion and the changing geophysics that are waterways are experiencing because of all the storms," said Wiggins. "What that ends up doing is it puts us in a perpetual chase for the next weak spot, a perpetual hunt for the next possible rupture."

"It's time for us to take back our sovereignty (and) to stand up and protect our waters," he said.

The Bad River and Kakagon sloughs have been recognized as wetlands of international importance that are home to wild rice beds and breeding ground for lake sturgeon and endangered shorebirds.

"The Bad River flows directly into Lake Superior, and we’re dealing with a world-class designated water estuary that basically fosters everything we need to live a healthy lifestyle," said Jennings.

The riverbank has been eroding by an average of 13 feet per year since 2015, according to the complaint. The rate of erosion means Line 5 could be potentially exposed within two to five years. The complaint states the federal Pipeline and Hazardous Materials Safety Administration (PHMSA) warned Congress in 2013 about the dangers of pipelines exposed by rivers, noting they risk rupturing from additional stress that could stem from currents and debris.

"I think what people should understand is the constant fear and anxiety that our community has had to endure due to constant and unknown threats that the line poses," said Jennings. "It’s a burden that we’re not willing or prepared to keep any longer."

Wiggins said Enbridge viewed one potential remedy to the tribe's concerns would be to alter the river by reinforcing the banks. But, Wiggins said that option may pose unintended consequences in the event of flooding on the river.

The company has said in the past that Line 5 has been operating safely through the reservation since 1953.

Enbridge is also facing opposition in Michigan where the administration has also pursued legal action to shut down the energy firm's 66-year-old Line 5.