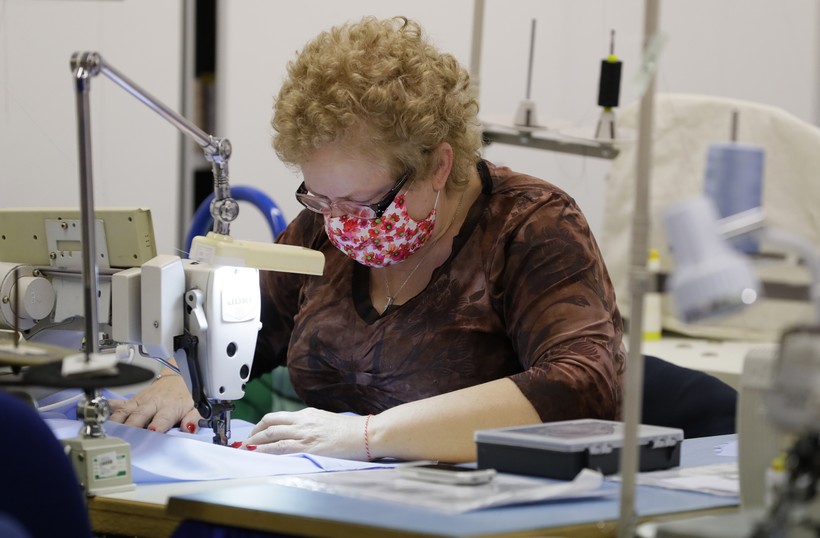 A machinist, usually sewing high end fashion, sews scrubs for the NHS at the factory of Fashion Enter in London, as the country is in lockdown to help curb the spread of the coronavirus, Friday, April 3, 2020. The company normally makes fashion garments for Asos, but the shortages within the NHS mean that they have put their fashion orders on hold whilst they make PPE (personal protective equipment) to protect workers against the coronavirus outbreak. Kirsty Wigglesworth/AP Photo

DHS: Record High COVID-19 Numbers On Friday Are Due To Test Reporting Errors

DHS Reported 1,498 New Cases Of The Virus On Friday
By WPR Staff
Share:

New daily COVID-19 cases hit an all-time high Friday in Wisconsin, based on the latest data published by the state’s Department of Health Services.

According to DHS, the high number is due to a delay in processing the tests.

"Problems with the laboratory test reporting over the last few days delayed the processing of the numbers until today, but that has now been fixed," said a post on the DHS Facebook page. DHS had previously reported a brief outage of the Wisconsin Electronic Disease Surveillance System, which local health departments use to report COVID-19 cases.

The latest figures bring the overall total of positive cases in Wisconsin to 79,354, according to the DHS. A total of 1,153 people in Wisconsin have died from COVID-19, with seven new deaths reported on Friday.

According to DHS, 12.8 percent of all test results reported on Friday were positive for COVID-19, bringing the overall percentage of positive tests over the past seven days to 9.1 percent. The previous seven-day period's test-positive rate was 8.4 percent.

Wisconsin's daily testing capacity — based on the availability of test supplies and adequate staffing — has grown from 120 available lab tests in early March to 27,080 as of Friday. The number of actual people with test results reported on Friday was 11,702.