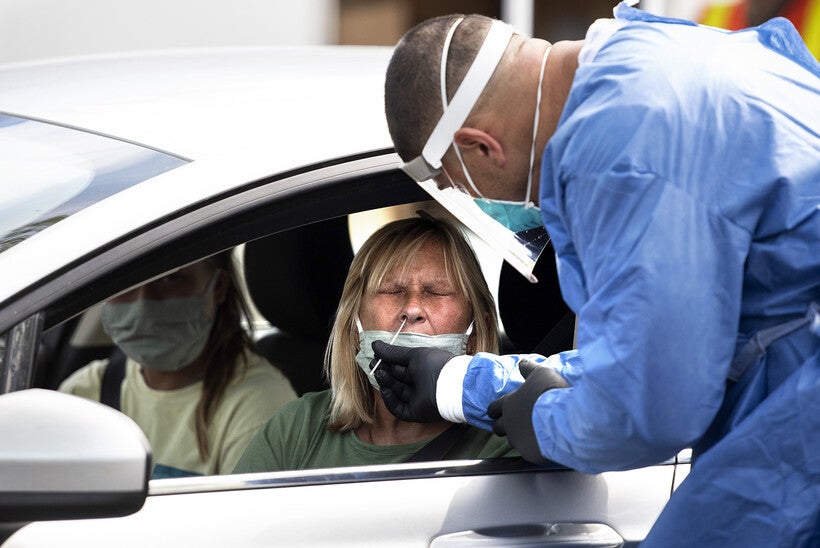 Tammy Brooks of Fontana receives a COVID-19 test from a member of the Wisconsin National Guard on Tuesday, July 14, 2020, in Walworth, Wis. Angela Major/WPR

New daily reported cases of COVID-19 remain hovering close to 700 per day on average in Wisconsin, although Monday's new case totals were far lower than that, based on the latest figures from the state Department of Health Services.

DHS reported 266 new cases of the virus on Monday, bringing the average for the past seven days to 678 daily cases. It's typical for the DHS to report fewer test results and lower numbers of new COVID-19 cases on Mondays.

The number of actual people with test results reported on Monday was 3,818, the lowest total reported in a day by the DHS since June 1.

A DHS spokesperson said the Wisconsin Electronic Disease Surveillance System, which local health departments use to report COVID-19 cases, was "down for a bit" on Sunday. She did not comment on how the outage may have impacted Monday's case numbers, saying the data "can fluctuate for a number of reasons."

Before case numbers were released on Monday, Public Health Madison and Dane County tweeted about the system outage and said case numbers would look "artificially low" on Monday. The department has not yet returned requests for comment.

The latest figures bring the overall total of positive cases in Wisconsin to 75,603, according to the DHS. A total of 1,122 people in Wisconsin have died from COVID-19, with no new deaths reported on Monday.

According to DHS, 7 percent of all test results reported on Monday were positive for COVID-19, bringing the overall percentage of positive tests over the past seven days to 8.2. The previous seven-day period's test-positive rate was 8.1 percent.

Wisconsin's daily testing capacity — based on the availability of test supplies and adequate staffing — has grown from 120 available lab tests in early March to 26,591 as of Monday.

There have been confirmed cases in all 72 of Wisconsin's counties. Based on the data from last Wednesday, all counties reported cases over the two-week period.