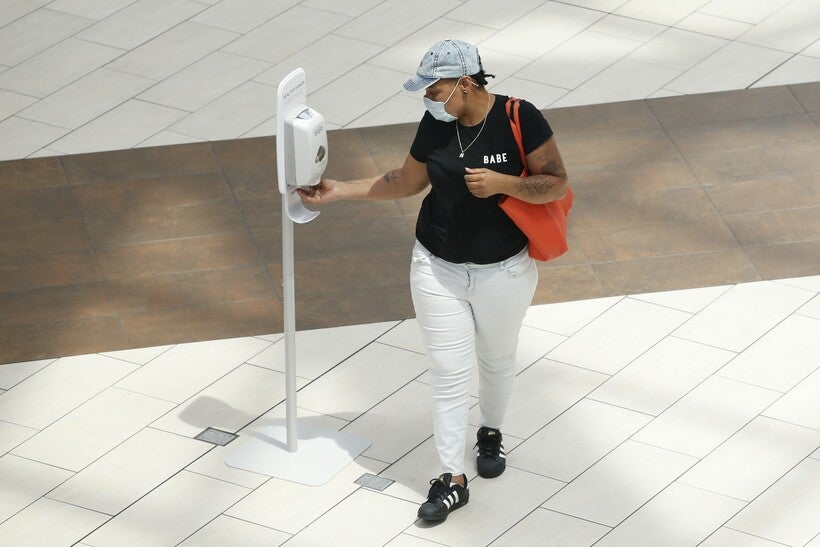 A person stops for some hand sanitizer at the Arden Fair Mall in Sacramento, Calif., Friday, May 29, 2020. Arden Fair reopened Friday since closing in March due to the coronavirus pandemic. Rich Pedroncelli/AP Photo

DHS: COVID-19 Testing Ticks Up, So Do Positive Cases

607 People Have Died From Coronavirus In Wisconsin So Far
By WPR Staff
Share:

There have been 18,917 positive cases of COVID-19 in Wisconsin as of Tuesday, according to the state Department of Health Services. That's an increase of 374 cases from the day before, and more than twice as many new cases as were reported the previous day.

On Monday, the state had the smallest single-day increase in weeks with 140 more cases between Sunday and Monday.

According to health officials, 607 people in Wisconsin have died from COVID-19 as of Tuesday afternoon.

DHS reported 263,743 negative tests for the new coronavirus, an increase of 10,149 from Monday to Tuesday.

Wisconsin's daily testing capacity has grown from 120 available lab tests in early March to 15,115 as of Monday. An increase in testing is one reason for the increase in the number of positive cases. The percentage of positive tests was 3.6 percent Tuesday. It was 3.9 percent Monday, and it hit its lowest point Sunday at 2.3 percent.

The state has also seen a downward trajectory of COVID-like illnesses reported within a 14-day period.

As for the state's hospitals, 95 percent report being able to treat all patients without crisis standards of care and 95 percent of hospitals claim they have arranged to test all symptomatic staff treating patients, according to DHS. There has not been a downward trend of COVID-19 cases among health care workers, calculated weekly.

Friday was the first time the state met the plan's goal of testing 12,000 people per day for COVID-19, with DHS reporting a total of 12,869 tests. Testing totals dipped over the weekend, with the DHS reporting 9,320 tests conducted Saturday, and 7,195 Sunday. On Tuesday, 10,523 tests were conducted.