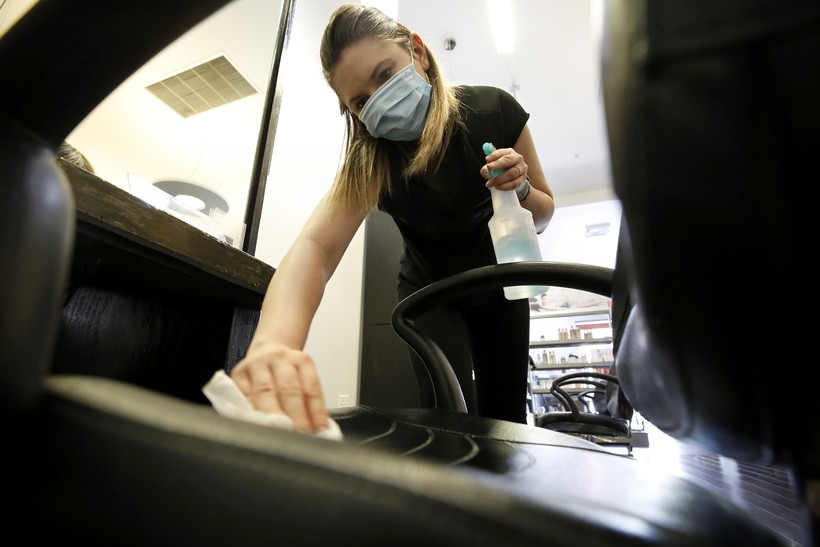 Michaela Kouvelas sanitizes a styling station at the Willo Aveda Salon in Roseville, Calif., Friday, May 29, 2020. The salon closed back in March, due to the coronavirus pandemic, reopened for businesses Friday. New guidelines, are being followed including requiring six feet between patrons, sanitizing each station after every client and providing masks for workers and customers who need them. Rich Pedroncelli/AP Photo

595 People Have Died From Coronavirus In Wisconsin So Far
By WPR Staff
Share:

There have been 18,543 positive cases of COVID-19 in Wisconsin as of Monday, according to the state Department of Health Services. That's an increase of 140 cases from the day before, and the smallest single-day increase in weeks.

According to health officials, 595 people in Wisconsin have died from COVID-19 as of Monday afternoon.

DHS reported 253,595 negative tests for the new coronavirus, an increase of 3,492 from Sunday to Monday.

Wisconsin's daily testing capacity has grown from 120 available lab tests in early March to 14,753 as of Sunday. An increase in testing is one reason for the increase in the number of positive cases. The percentage of positive tests was 3.9 percent Monday. It hit its lowest point on Sunday at 2.3 percent.

On a positive note, the state has seen a downward trajectory of COVID-like illnesses reported within a 14-day period.

As for the state's hospitals, 95 percent report being able to treat all patients without crisis standards of care and 95 percent of hospitals claim they have arranged to test all symptomatic staff treating patients, according to DHS.

Gov. Tony Evers plans to spend $1 billion in federal funds to combat COVID-19 in Wisconsin. The money will be used to pay for contact tracing, ongoing efforts to test people for the virus and preparing for a potential surge. Last Wednesday, Evers announced the $200 million "Routes to Recovery" grant program funded by the federal coronavirus relief bill and aimed at helping local governments address urgent needs. Evers said $10 million of that will go to Wisconsin's tribal nations, with the remainder distributed among county, city, village and town governments.

Friday was the first time the state met the plan's goal of testing 12,000 people per day for COVID-19, with DHS reporting a total of 12,869 tests. Testing totals dipped over the weekend, with the DHS reporting 9,320 tests conducted Saturday, and 7,195 Sunday.