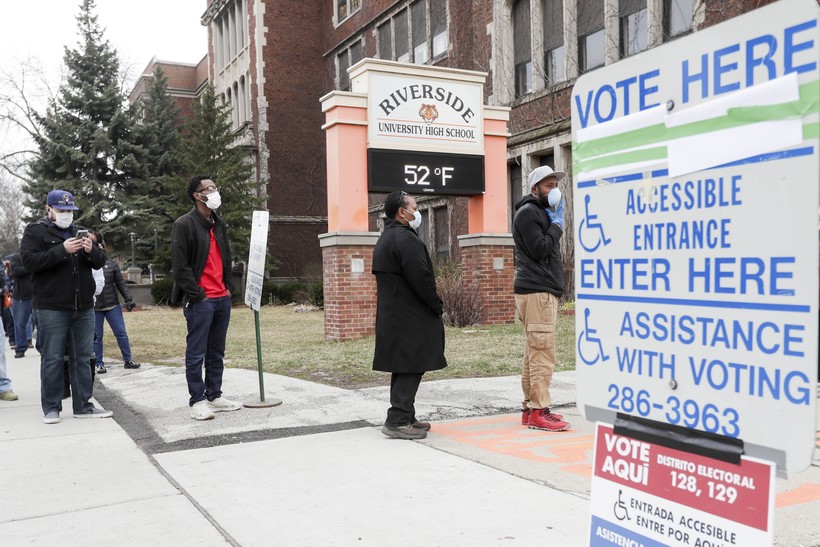 Voters line up at Riverside High School for Wisconsin's primary election Tuesday April 7, 2020, in Milwaukee. The new coronavirus causes mild or moderate symptoms for most people, but for some, especially older adults and people with existing health problems, it can cause more severe illness or death. Morry Gash/AP Photo

A little more than two weeks after Wisconsin's April 7 election went forward with in-person voting, 19 voters and poll workers who participated have tested positive for COVID-19, although where they were exposed to the disease remains uncertain, according to the state Department of Health Services.

People lined up outside polling places to cast their votes in state and presidential primary races on election day despite Gov. Tony Evers' attempts to postpone the election and prevent further spread of the disease.

A few days later, DHS announced it would track any new transmissions from election day.

DHS Deputy Secretary Julie Willems Van Dijk said in a call with reporters on Wednesday that the department can't say for sure whether or not the 19 people who were at the polls and subsequently came down with COVID-19 caught it on election day.

"We are not able to say that their exposure was necessarily at the polls because they are all people who could have had exposure in other places," she said.

One of them tested negative, but doctors for the other four didn't order tests, Knapp said.

Willems Van Dijk said at the beginning of the pandemic, COVID-19 tests were reserved for health care workers, people who had come into contact with a confirmed case or people who were very sick.

Now, as the state’s testing capacity grows, DHS officials are trying to get the word out to health care workers that they should test people with mild symptoms too, she said.

"I think we'll start to see a shift where those four citizen soldiers, if they called today, would get a test, whereas a few weeks ago, they didn't," Willems Van Dijk said.

Willems Van Dijk added there are still barriers to widespread testing, including a lack of personal protective equipment like masks and gloves.