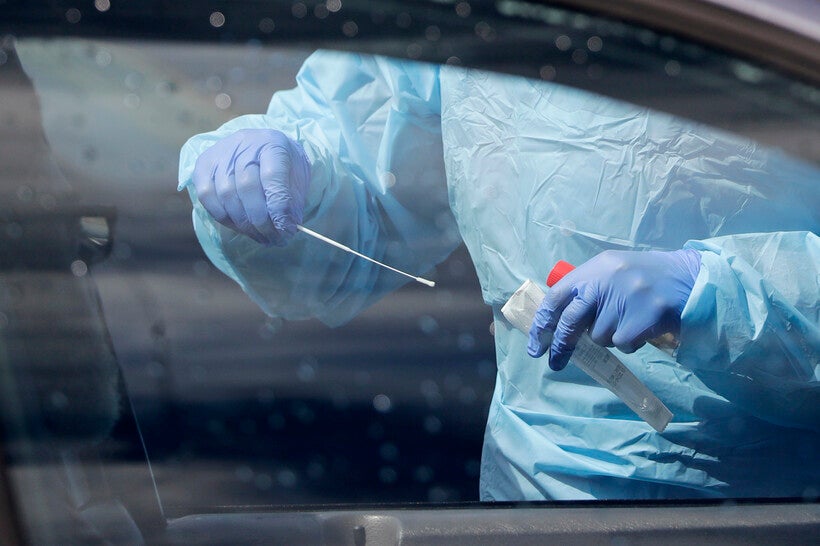 A medical assistant prepares to take a swab from a patient at a new drive-thru and walk-up coronavirus testing site Saturday, April 25, 2020, in Seattle. The site, open Wednesdays and Saturdays from 10 a.m. to 3 p.m. in the Rainier Beach neighborhood, is available to anyone displaying the virus symptoms, are pregnant, over 60 or have a chronic condition, as well as health care workers and first responders. Elaine Thompson/AP Photo

Gov. Tony Evers says the Wisconsin Supreme Court ruling that overturned most of the state's "Safer at Home" order has resulted in chaos for state residents and business leaders.

During a briefing Thursday, Evers said his administration had already opened some 14,000 small businesses around the state Monday potentially putting 90,000 people back to work.

"Despite that good work by Wisconsinites across our state who banded together, stayed home and stayed safe, Republican legislators have convinced four of our Supreme Court justices to throw our state into chaos," Evers said. "We saw it already last night when the Tavern League of Wisconsin urged its members to open back up and people flooded the bars across the state instead of a comprehensive statewide approach to keep people safe."

As a result, Evers said some local governments around the state are enacting their own rules, which will create a patchwork of regulations.

"That means you might have to follow a different set of rules then your neighbors across the street," Evers said. "And if you own businesses in multiple locations or have employees who live in a different community than the one they work in, things are going to get very confusing, very fast."

"This decision will hamper our ability to protect the health and safety of Wisconsinites, and it risks increasing our cases and our deaths," said Palm. "In the face of this reality, I urge you to stick with us, Wisconsin, and continue to stay safer at home. Your commitment to flattening the curve has helped protect our frontline health care workers, our most vulnerable neighbors, and the capacity of our health care system more broadly."

Palm said the court's ruling "changes nothing about the science of this virus" and suggested there is more work to be done to open the state safely.

Palm announced Thursday there are 11,275 positive cases of COVID-19 in Wisconsin. That's an increase of 373 cases from the day before.

According to health officials, 434 people in Wisconsin have died from COVID-19 as of Thursday afternoon.

DHS reported 122,598 negative tests for the new coronavirus, an increase of 1,124 from Wednesday to Thursday.

DHS also released the names Wednesday of nursing homes that are currently under active public health investigation. Up until now, the state has not identified specific facilities where investigations are taking place.

On Wednesday, the state Supreme Court overturned Wisconsin's stay-at-home order, striking down one of the primary tools the Evers' administration has used in its effort to slow the spread of the novel coronavirus.

The justices ruled the Evers' administration exceeded its authority when Palm issued the "Safer at Home" extension scheduled to run until Tuesday, May 26.

The ruling does not mean life will return to normal in Wisconsin. It means it now falls to officials in the state's 72 counties and in local municipalities to manage their communities' response to COVID-19.

Before the ruling, the state had made progress in meeting criteria for reopening the state outlined in Evers' "Badger Bounce Back" plan. A key metric is for the percentage of positive cases to be in decline over a 14-day period. According to state data, that metric has been met.

Last week, DHS released an additional list of metrics the agency planned to use to "determine when we can begin to allow people to interact and, more importantly, get Wisconsinites back to work."

Before the state Supreme Court ruling, Evers announced Monday looser restrictions on more businesses because of criteria being met. The move allowed standalone or strip-mall-based retail stores to offer in-person shopping for up to five customers at a time with required social distancing practices and suggested safety guidelines, and drive-in theaters to operate with some restrictions.

As of Wednesday afternoon, Wisconsin has 52 labs performing COVID-19 tests, up from eight labs in March. According to DHS, they're able to process 13,345 samples per day — more than the state's goal of completing about 12,000 tests per day.

There are confirmed cases in 70 of Wisconsin's 72 counties. Burnett and Pepin counties reported their first positive case of COVID-19 Thursday.

Langlade and Taylor counties have no confirmed cases as of Thursday afternoon.

Outbreak Wisconsin: ER Nurse Ponders Life After The Pandemic, Calling Spring A 'Season Of Rebirth'
Wisconsin Medical Leader: Rising Cases, Spikes In Surrounding States Are A 'Warning Sign'
Evers Reaches Deal With Feds To Keep Millions In Food Aid Coming To Wisconsin
Months After Benefits Were Paid, State Serves Some Unemployment Recipients With 'Overpayment' Notices
Green Bay Is Home To The World's Largest Freshwater Estuary. It's In The Running To Be A National Research Reserve.