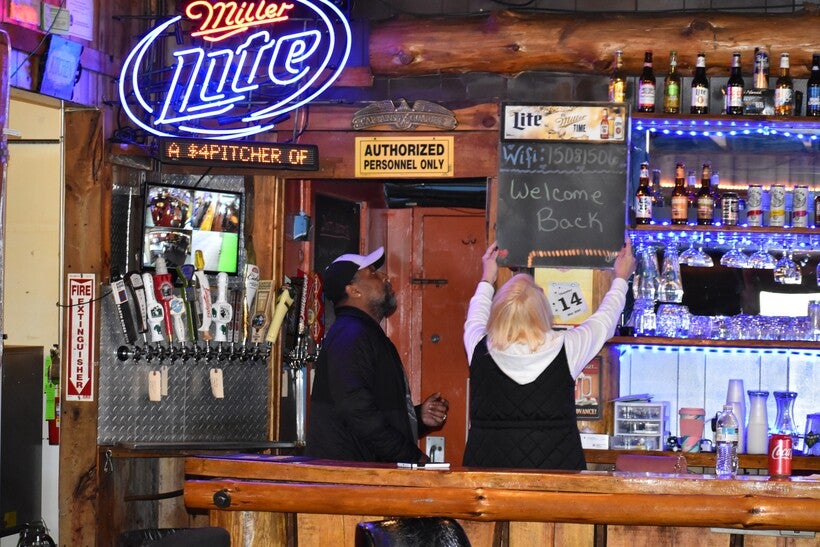 Tina Breimon, bartender and manager of Izzy's Bar in Superior, hangs up a sign Thursday that says, "Welcome Back."
Danielle Kaeding/WPR

People Try To Sort Through What The Decision Means For Them
By Danielle Kaeding
Updated:
Thursday, May 14, 2020, 2:25pm
Share:

Wisconsin businesses and residents are trying to sort through what it means now that the Wisconsin Supreme Court has overturned the state's stay-at-home order — one of the primary tools Gov. Tony Evers' administration has used to help slow the spread of COVID-19.

Justices ruled 4-3 Wednesday that the Evers' administration exceeded its authority when the stay-at-home order was extended by state Department of Health Services Secretary Andrea Palm, which was set to remain in place through Tuesday, May 26. Republican lawmakers had challenged the order, saying it was overly broad and unconstitutional. The Evers' administration argued the order was lawful and necessary to protect public health.

On Wednesday night, Bird's Bar in Superior opened its doors to around 40 people after the ruling came down and following notice from the state's Tavern League that it was legal to open. On Thursday morning, Bird's Bar co-owners Cory Gatzke and Kim Moore were working behind the bar and preparing for possibly opening again Friday.

Gatzke said he was happy to see the bar open after two months of being closed.

"I think it’s awesome. Something had to happen. I don’t know how long we would be able to weather the storm here," he said.

But, both Gatzke and Moore said they weren't prepared to open so soon. 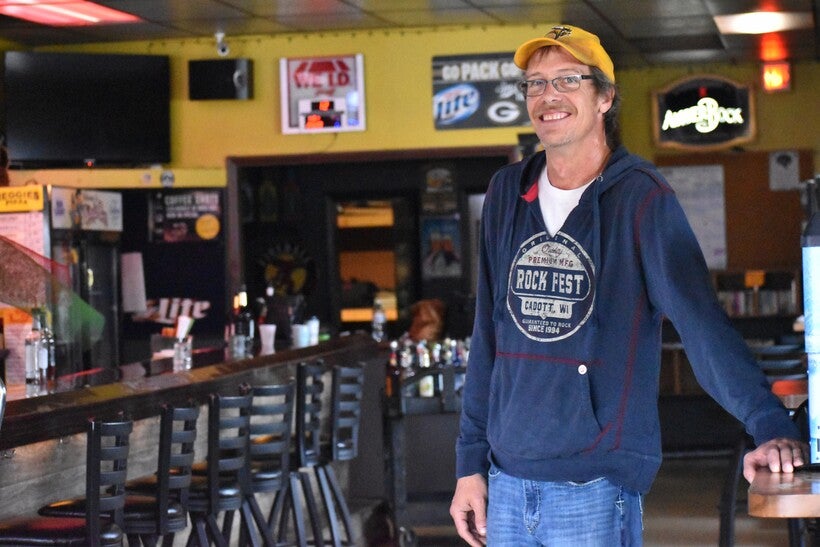 Bird's Bar co-owner Cory Gatzke said he's glad that they've been able to reopen after two months of being closed. Gatzke said about 40 people came in after the ruling came down Wednesday.
Danielle Kaeding/WPR

"I think we let emotions take over when we needed to do this systematically and safely and that’s why were here today," said Moore. "We’ve got our whole staff coming in at 1 o’clock to have a meeting. If anybody doesn’t feel safe working, they don’t have to. If customers are not feeling well, we ask that they not come in."

Moore said customers and employers are encouraged to wear masks.

"I don’t know what to do. It’s a scary time. Our business needs to open, but I want to protect our employees, our customers, and ourselves. I’m going to do a lot of researching today and see what the CDC guidelines are. We’re going to remove some chairs and tables, I’m sure, and space out the chairs at the bar and put hand sanitizer stations if I can find any."

By 11:30 a.m. Thursday, Moore had already turned several people away who had come to the bar, including Matthew Nowacki of Duluth. He'd heard the bar had reopened Wednesday while Minnesota bars remain closed.

"After two months on lockdown, it's refreshing to see something open again, and Duluth is still for pretty much locked down," said Nowacki.

He said he came out because he missed the interaction with other people.

"I get — I won't say claustrophobic — but I get cabin fever and I feel the need to go out. Doesn't have to be social drinking, just a matter of getting out," he said. 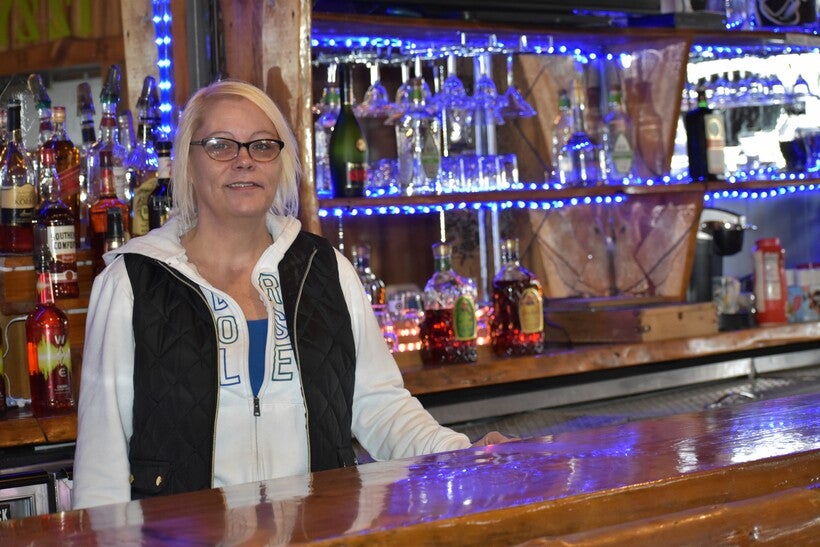 Tina Breimon, bartender and manager of Izzy's Bar in Superior, said it's very exciting to allow people back into the bar after doing curbisde service for the last two months.
Danielle Kaeding/WPR

Izzy's Bar in Superior was open at 10 a.m. Thursday. Tina Breimon, bar manager, said she'd already received several calls on whether they were open. Breimon said they've been cleaning and making upgrades to the bar in the last two months, including new flooring. She said they were working on spacing out tables and chairs in anticipation of seeing customers again, but hadn't set a limit on customers.

"People are still kind of keeping themselves away from other people, so until we see some something else happening, you know, too much congregating in one spot, then we'll put up some parameters," she said.

Breimon said they're planning to use gloves and face masks while serving food and drinks.

Another bar owner in Superior said he was trying to figure out from city leaders and health officials if they could in fact reopen. The state Supreme Court ruling means local officials now decide whether any restrictions on businesses, travel or gatherings are warranted.

Rachel Murray operates and owns Nail Designs by Rachel in Edgerton, located in Rock County. That county and several others issued local stay-at-home orders shortly after justices struck down the statewide order.

Murray's business has been closed since March 20, and she has applied for — but has not yet received — unemployment. Murray said she hasn't been paid in eight weeks.

"Things are tight. I’m not able to pay the bills I normally pay with my income," said Murray, noting that includes business costs, renter’s insurance and credit cards.

Murray said she's torn on the outcome of the state Supreme Court's decision. But, she said she has to go back to work whenever that's allowed by health officials.

"I feel as people we should be able to understand what we need to do to keep ourselves safe by now. We haven’t spent the last 60 days practicing this to just throw it all away," said Murray. "I would like to think most people are pretty understanding of the virus is real and you need to take precautions. Is another 14 days going to make a difference?"

45 minutes after the bars open in Wisconsin.... pic.twitter.com/xqaDlS6ajP

But, Nancy Rank of La Crosse said she believes Evers has been acting in the best interest of public health and that the state's stay-at-home order should have remained in place.

"He's trying to keep people safe and alive and not sick. People think this is just a cold. They need to visit a hospital where people have been dying, and are barely able to breathe," said Rank. "Then, they'll see how serious this really can be."

Joy Olson from the Town of Medary in La Crosse County said her cousin's husband died from COVID-19 in Chicago.

"At this time, there's not a lot of deaths in Wisconsin, but that could change once we open up," said Olson. 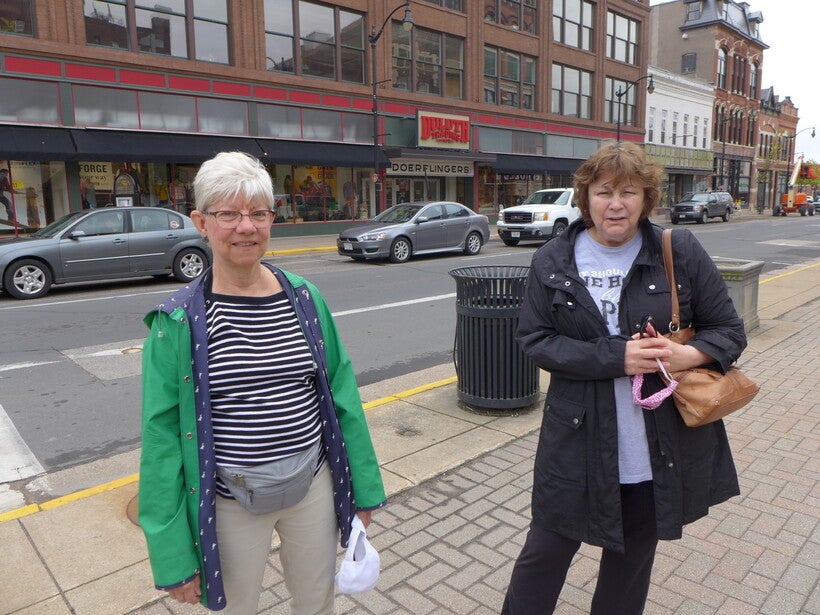 In this file photo taken Thursday, May 14, 2020, Nancy Rank, left, and Joy Olson, right, can be seen discussing that they wanted the state's stay-at-home order to remain in place a little longer. The Wisconsin Supreme Court overturned the order Wednesday, May 13, 2020. Hope Kirwan/WPR

Loren Asche of Windsor in Dane County also wishes the order would have been left in place a little bit longer.

"I just feel like we're not out of the woods with the pandemic yet, and it's a little too early to release everything, especially opening up bars," he said.

Asche is supportive of opening businesses in phases. For example, he said when golf courses first reopened, golf pro shops were still closed. Earlier this week, pro shops were allowed to have five customers at a time.

"That was a very practical solution and it works very well," Asche said. "I think restaurants and many of the other industries could do something similar where they opened up."

When Chris Zahrte of Madison first heard the "Safer At Home" order had been struck down, her first reaction was fear. She's scared for her family's health and safety, as well as her own.

She supports local governments making their own stay-at-home orders, as Dane County has done. But she's worried that won't be enough to keep the virus at bay.

"People coming in from outside of Madison and bringing things in, you know that's scary, too," she said.

Stephanie Sue Stein, a representative for the League of Progressive Seniors in Milwaukee, is among the roughly 11,000 people statewide who have tested positive for the novel coronavirus. She said it's outrageous that some people believe individual freedoms trump the overall public health.

"Yet with no uniform rules left now, no one in Wisconsin is safe and older people and people with disabilities are in grave danger," she said.

Rev. Greg Lewis with Souls to the Polls in Milwaukee had to be hospitalized in the intensive care unit after contracting the virus. He's lost four friends to COVID-19. He called the state Supreme Court's ruling a recipe for disaster.

"A disaster that will be more deadly for communities of color, working people and the elderly," Lewis said. "Again and again, these lawmakers show us that they care more about political game. They're protecting the health and well-being of our community."

Madison-based nurse Ani Weaver said the state should be celebrating its success in flattening the curve.

"I feel like we've just basically destroyed any kind of headway in progress that we've made," said Weaver.

However, the state's Republican leaders have said state residents are "up to the task" of fighting the virus through social distancing, telecommuting and other precautions.

Republican lawmakers have not put forth their own plan for reopening the state, but they've supported reopening the state under a plan put forth by the state's largest business lobby, Wisconsin Manufacturers and Commerce. The WMC plan would require businesses to operate with more or fewer restrictions depending on the number of cases and the population density of their counties while also accounting for the type of work they do.