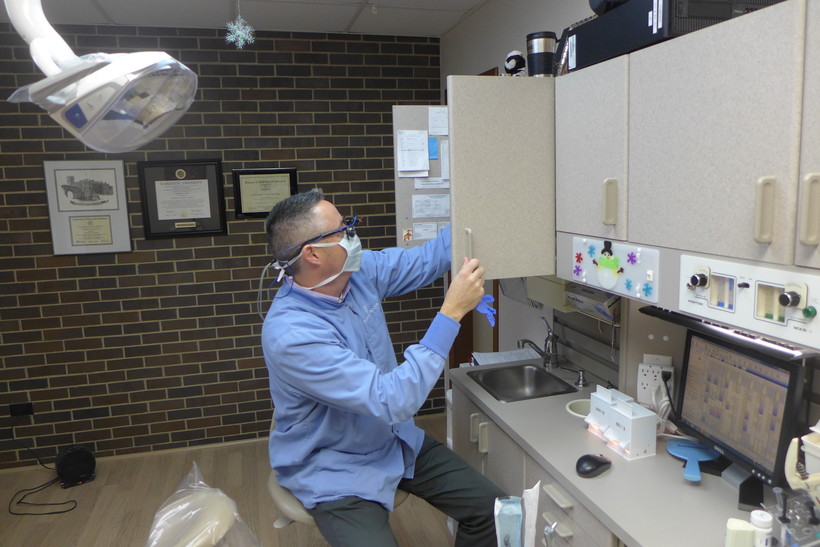 Dental Arts Associates in Green Bay has resumed taking Medicaid patients after dropping out of the program several years ago because of low reimbursement rates. Dr. Zachary Graf says they "jumped at the chance" to be in a new pilot program. Shamane Mills/WPR

Dentists Ask For More Funding For Treating Patients With Medicaid

Those In Medicaid Program Say Reimbursement Rates Are Too Low
By Shamane Mills
Share:

Medicaid is one of the biggest cost drivers in the state budget, but dentists say they’re getting less than 1 percent of that money. They're asking the state to pay them more for taking on patients who get insurance through Medicaid.

In an attempt to address the gap in dental care for low-income children across Wisconsin, the state began a pilot program that does just that. The pilot — active in Brown, Marathon, Racine and Polk counties — is called the Enhanced Dental Reimbursement Pilot Program. Since October 2016, the state has boosted rates for dentists in those four counties. Preliminary data show 62 new dentists came into the government health program after the creation of the pilot. But some weren't really new; they’d been in the program, left, then returned, when the state started paying more.

"We were losing money with our Medicaid patients so we actually stopped (accepting them)," said Dr. Zachary Graf, a dentist with Dental Arts Associates in Green Bay. "When the pilot program came up in 2016, we jumped at it."

Graf said him and a group of dentists had been traveling to Madison for years to talk to lawmakers about increasing reimbursement for Medicaid patients, so they would be able to provide care to those who need it.

In general, he says, patients on Medicaid have serious tooth problems and may not have seen a dentist in a long time — if ever.

"It’s not your run-of-the-mill garden variety cavity that we see in our practice here. It's usually eleventh hour dentistry," said Graf.

Graf and other dentists in Brown, Marathon, Racine and Polk counties get more Medicaid money under the pilot. But some lawmakers like Rep. Kathy Bernier, R-Chippewa Falls, want to see the program expanded.

"The additional funding isn’t all that gets people to the dentist," Bernier said during a Legislative committee hearing in November on a bill she authored. "Taking care of oral health certainly is significant."

Bernier's bill would add counties with high dental care needs to the program if the funds allocated for the reimbursement exceeds $100,000 after providing the increase for the specified pilot counties.

But at this time, state health officials don't know how much of an impact the pilot program has had — or will have — on access to dental care. Expanding the program before understanding its impact is not something the Walker Administration takes lightly.

While officials in the Walker administration say they want to improve dental access, they argue there are other ways to do it than increasing Medicaid reimbursements. One suggestion is letting dental hygienists do more or combining medical and dental facilities in one place.

Even those who support higher reimbursement rates concede there's not a direct link to outcomes.

Few — if any — funds are expected to be left from the pilot program which cost $13 million: $5 million of which came from state funds. The rest came from the federal government.

"We expect to spend every dollar and probably more than the Legislature provided for us for this pilot, and so as far as expansion, the department really wants to look at the data and see what is the equation here for increased payment rates," said Casey Himebauch, deputy Medicaid director at the Wisconsin Department of Health Services.

Medicaid makes up a large portion of the state's budget and many agencies are fighting over those funds. Nursing homes across the state are in danger of closing, and hospitals, like dental facilities, bare the brunt of a lot of the costs of medical care for patients who are on Medicaid.

Medicaid provides care for children, the elderly and those with disabilities. If the dental pilot program were to expand, it could pit heath groups against each other for scarce dollars.

"If the pilot is successful what happens is suddenly the state is forced to address expanding it to every single county. Right now it's four counties. Going to 72 counties is going to be very expensive," said Dane County dentist David Gunderson. "In that equation you’re suddenly going to have a 'cat fight' between every group that wants Medicaid reimbursement."

The state has a long list of health care priorities and Gunderson says dental care is unlikely to get priority. And the only people who lose, he says, are those who need dental care.

Editor's Note: This story is Part 2 of a three-part series exploring dental coverage across the state of Wisconsin. You can read Part 1 here.