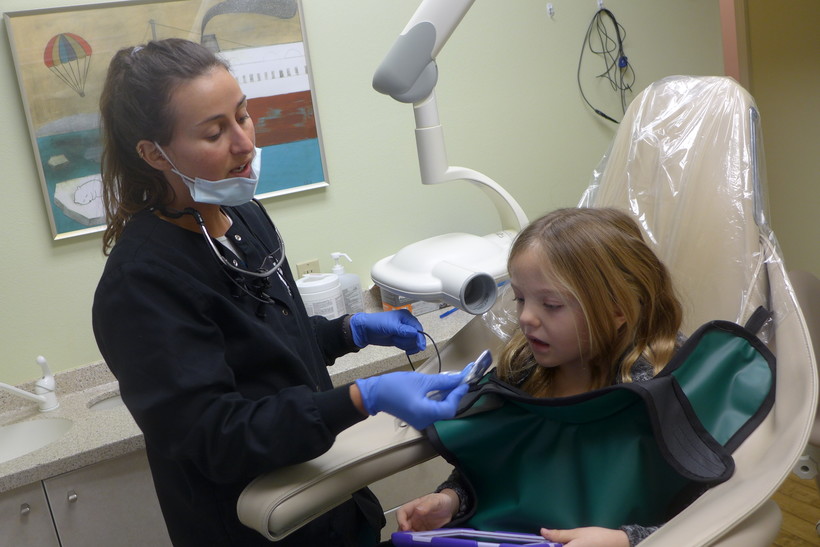 Adylee, right, gets a dental checkup at Oral Health Partnership in Green Bay. Brown County is part of a pilot program where the state pays dentists more to participate in the Medicaid program to determine if higher reimbursement increases access. Shamane Mills/WPR

Pilot Program Pays Some Dentists More To Take Medicaid Patients To See If It Increases Access
By Shamane Mills
Share:

Dental care for low-income children has been a problem in Wisconsin for years.

One reason is that parents can't find dentists who will accept Medicaid, known in Wisconsin as BadgerCare.

To help address this gap, the state is paying some dentists who take Medicaid patients more to see if it will improve access to care. The Enhanced Dental Reimbursement Pilot Program began in October 2016 and includes Brown, Marathon, Racine and Polk counties.

For one Brown County family it means the children are now getting regular dental care.

"My youngest, she's got a really bad sweet tooth. So like anytime she sees candy it's in her mouth. So she ended up having to have some oral surgery done; caps puts on, some stuff removed," said Christie, a 32-year-old mother from Pulaski, who asked WPR not to use her last name for privacy concerns.

Christie said her first two children didn’t see a dentist until they were 5 or 6 years old because she had trouble finding a dentist who took Medicaid. When she finally found a dentist, they stopped taking Medicaid.

Only about a third of dentists in the state accept BadgerCare, according to 2015 data compiled by the American Dental Association's Health Policy Institute. For those who do take Medicaid — like Oral Health Partnership where Adylee is getting a checkup — the bottom line is always a concern.

Oral Health Partnership Director Michael Schwartz-Oscar said the nonprofit dental office in Green Bay has "squeaked by" with the help of donations to supplement state reimbursement that didn’t cover costs.

The pilot provides dental care for kids — from newborns up to age 20 — and also adults of all ages who need emergency care. Schwartz-Oscar said the extra money is making a difference.

"This enhanced reimbursement pilot is doing it for us. We’re able to see more kids, hire more dentists," he said.

Oral Health Partnership has hired three more dentists and reduced appointment wait times from four months to just two weeks because of the money from the pilot program.

But some dentists are skeptical of the latest effort, Schwartz-Oscar said.

There’s lots of paperwork, a high number of patients cancel appointments, and pilots in the past fizzled. "If you don’t do anything, nothing’s going to change. We’ll continue to be last," Schwartz-Oscar said. "We continue to have all these preventable dental issues going to the ERs and costing the state millions, right? We’re saving the state tremendous amounts of money by not having children in the ERs or as adults having more advanced dental issues."

According to Wisconsin Dental Association, the state's Medicaid reimbursement rates are currently the third lowest in the nation for children’s dental care and fifth lowest in the nation for adults. Yet, some states pay dentists less than Wisconsin and have better access. State officials say before they expand the program they want to see some hard data on whether extra tax dollars get more kids to go to the dentist.

Editor's Note: This story is Part 1 of a three-part series exploring dental coverage across the state of Wisconsin. You can read Part 2 here.