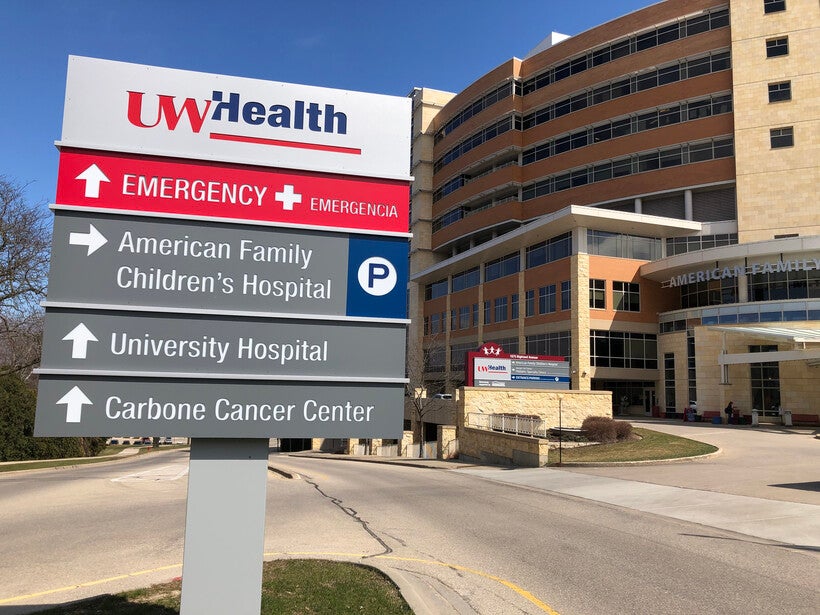 Nearly a year and a half after nurses at UW Health failed to get union recognition from management, they are supporting a bill from two Madison Democratic lawmakers that would give them input on workplace conditions.

A bill unveiled Thursday by state Sen. Melissa Agard and state Rep. Lisa Subeck would allow employees of the University of Wisconsin Hospitals and Clinics Authority to meet and consult over wages, hours and conditions of employment — something they haven’t been able to do since 2014 when the union disbanded after Republicans passed Act 10 under former Gov. Scott Walker.

Courtney Maurer is a cardiac nurse at UW Health, where she’s worked for 10 years. During the pandemic, she helped with COVID-19 patients who were "horrifically ill."

"That period was especially scary for me as I was pregnant with my first child. We reused personal protective equipment until it fell apart. We did not have the staff we needed," she said at a Thursday afternoon press conference across the street from UW Health University Hospital. 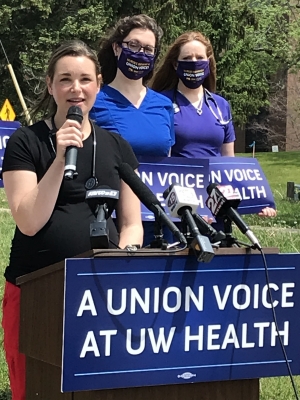 Courtney Maurer is a registered nurse in the cardiac unit at UW Hospital. During the pandemic she was shifted to working with COVID-19 patients when she was pregnant with her first child. Maurer supports proposed legislation that would give nurses more say in working conditions at the hospital. Shamane Mills/WPR

In late 2019, nurses at UW Health tried to revive the union, citing concern about nurse-to-patient ratios, having a union representative or advocate during disciplinary conversations and implementing a just-cause standard for discipline or termination of employment.

Then, the pandemic hit and nurses were consumed with caring for patients with a new disease, shifting focus away from employee-management relations.

"They set that aside to work for the greater good of protecting our community and keeping all of us safe," said Agard. "They were selfless and tireless about doing that. But the time for waiting is over."

In early 2020, the University of Wisconsin Hospitals and Clinics Authority Board refused to recognize the nurses’ union or negotiate a new agreement, citing Act 10.

"Our UW nurses should have the same opportunity to have a say in their workplace as other nurses do at other hospitals in our community. Every other hospital in the state, nurses have the option to have a union voice," said Subeck.

In a statement, UW Health spokesperson Emily Kumlien said it would follow any new direction provided by the Legislature.

"We appreciate the work of Governor Evers and our local legislative leaders to debate this issue in the appropriate legislative forum. UW Health has always followed state laws on collective bargaining, pre and post Act 10, and will follow any new direction provided by the legislature. What will never change is our commitment to working together with our nurses and all care providers directly and collaboratively to meet the needs of our patients. That robust system of collaboration and shared governance is part of what makes UW Health a great place to work and a place our patients receive truly remarkable care."

Previously, UW Health has said issues can be addressed through shared governance, but nurses say that system isn’t working.

In his state budget, Gov. Tony Evers’ proposed restoring some union rights repealed under Act 10 to some local and state employees on the front lines. But that proposal, along with more than 300 other items, were taken out of the governor’s spending plan in early May by Republicans on the Legislature’s budget-writing committee.