Nurses Call On Hospital Administration To Recognize Union Which Was Phased Out After Act 10
By Shamane Mills
Updated:
Thursday, December 19, 2019, 3:15pm
Share:

Nurses at the UW Hospital are trying to revive their union five years after it expired.

Employee unions were phased out at UW Hospital and Clinics in 2014 following the passage of Act 10 under former Gov. Scott Walker. In 2011, the Republican-controlled Legislature gutted collective bargaining for most state workers.

Thursday, nurses held a news conference demanding recognition of their union, SEIU Healthcare Wisconsin. Nurses say turnover is high, exacerbating staffing issues. In recent years, nurses say they have had to care for as many as eight patients at once.

"There is a widespread sense among nurses in our hospital system of being unsupported by the hospital administration to provide that kind of nursing care that our patients expect and deserve," said Chuck Linsenmeyer, a nurse with almost 29 years of experience who works in the cardiac catheterization lab at UW Hospital. 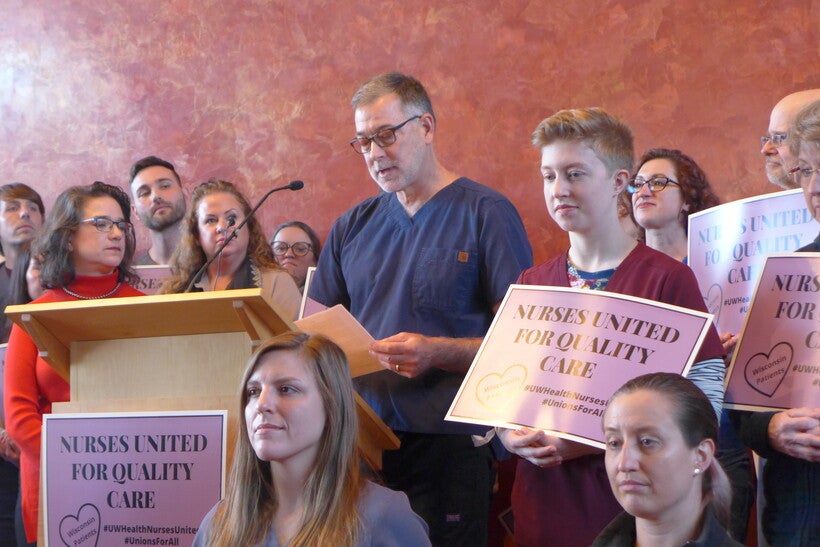 The hospital administration points out that health care systems across the country have been challenged by staff shortages and that UW has expanded its nurse residency program, and also reimburses tuition for nurses looking to advance their careers.

"We recognize that our nurses and staff are vital to our ability to provide the highest quality of care to our patients; and that is why we continue to develop aggressive and innovative programs to recruit, retain and train the nurses and staff that drive our remarkable care," said UW Hospital spokesperson Thomas Russell.

In a letter to the board that oversees employee relations, the University of Wisconsin Hospital and Clinics Authority (UWHCA), UW nurses contend that although bargaining rights were taken away under Act 10, the UWHCA Board can voluntarily recognize and confer with the newly-formed union to discuss terms and conditions of employment.

Nurses say they're concerned about nurse/patient ratios, having a union representative or advocate during disciplinary conversations and implementing a just-cause standard for discipline or termination of employment.

Without just-cause protection, nurses contend they can’t advocate on behalf of patients without fear of retaliation.

Compensation was not mentioned during the press event. Afterward, a speaker explained why.

"Pay is the least of our concerns honestly. Time and time again when we talked about what our concerns, it was about providing the quality care that we all got into this job to do," said Mariah Clark, an emergency room nurse who has worked at UW Hospital for 12 years.

Nurses began organizing in February and distributed support cards in September. If the union were recognized by UW Hospital it would include about 2,000 nurses, Clark said.