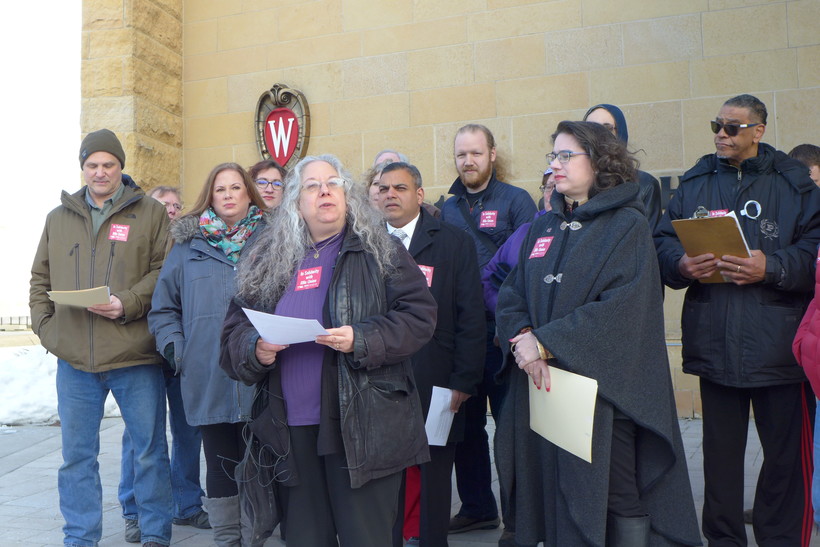 University Hospital nurses and their supporters speak out in support of a union which the hospital board refuses to recognize, saying it can't under a law which prevents most collective bargaining with public employees. Speaking before the Feb. 27 board meeting is Rabbi Bonnie Margulis, executive director of Wisconsin Faith Voices for Justice. To her left is state Rep. Melissa Sargent, D-Madison.  Shamane Mills/WPR

Union Supporters To UW Hospital: 'We Will Keep Coming Back'

Hospital Board Refuses To Recognize Newly-Formed Nurse Union, Saying It Will Work To Address Worker Concerns In Other Ways
By Shamane Mills
Share:

Nurses and their supporters packed a board meeting of the University Hospital and Clinics Authority Thursday on the University of Wisconsin-Madison campus to demand union recognition, touting community support and singing the song "Solidarity." But the board resisted their pleas, saying current law prevents them from doing so.

Speakers at the meeting praised hospital care while pressuring hospital administrators to stand up for nurses at UW Hospital who are unhappy with nurse-patient ratios and who want a just cause standard for discipline or termination of employment, among other workplace protections.

"As a member of the public, whose taxes go to pay for this hospital, I ask you what is your plan moving forward to recognize the union?" said Rabbi Bonnie Margulis, executive director of Wisconsin Faith Voices for Justice.

Robert Golden, the dean of the UW-Madison School of Medicine and Public Health, said the board wanted to hear the comments of nurses and their supporters in public, but would convene in closed session to discuss the matter before announcing their decision.

The board contends it is unable to acknowledge the union because of Act 10, the 2011 law, signed by former Republican Gov. Scott Walker that banned most collective bargaining for public employees in the state.

Nurses have sought public support for their cause, which began when they announced plans to form a union in mid-December. Earlier this month, the Dane County Board of Supervisors supported a resolution supporting UW nurses' effort to unionize.

Nurses have said a significant majority of their ranks support representation by Service Employees International Union. They said Act 10 doesn't bar the hospital board from "meeting and conferring" to reach an agreement on terms of employment.

The lack of legal clarity was brought up during the open portion of the hospital board meeting by those who support the nurses and contend administrators' insistence they can't recognize the union is incorrect.

The UWHCA Board of Directors said in a statement that it will schedule special meetings to hear further from UW nurses, but didn't directly address the demand for union recognition.

The hospital board decided that it would be best for patients, employees and management to continue trying to resolve employment issues in other ways. Specifically, the hospital board "expects management to develop and implement a plan in collaboration with nurses and all other clinical and non-clinical staff to have a strong voice in issues that impact them."

Employee unions were phased out at University Hospital in 2014 following the passage of Act 10.