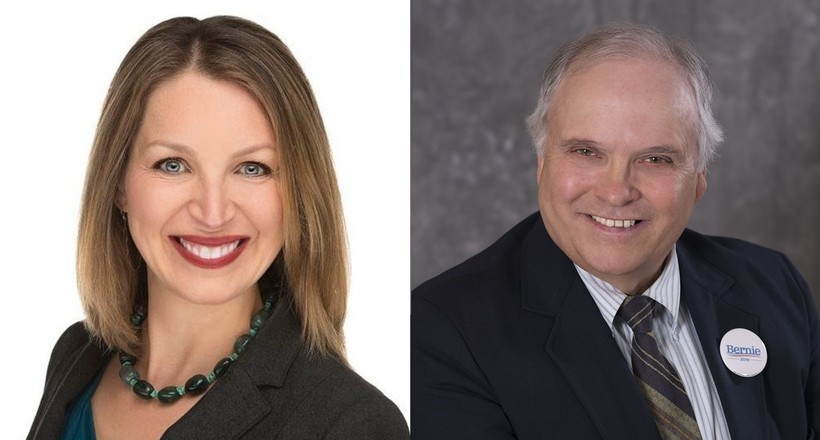 Tricia Zunker, Lawrence Dale Squared Off In A Debate Broadcast By WPR
By Rob Mentzer
Share:

Democratic candidates in Wisconsin's 7th Congressional District in their only scheduled debate differed on their approach to health care reforms, farm policies and reaching out to conservative voters.

Tricia Zunker and Lawrence Dale appeared on WPR for a debate broadcast across the district, which encompasses central and northwestern Wisconsin. It was the first time the two have appeared together, and their only debate ahead of the Feb. 18 primary election. The special election, called following the resignation of former U.S. Rep. Sean Duffy in September, will be May 12.

Zunker, who is Ho-Chunk, would be the first Native American congressional nominee from Wisconsin since 1992, and if she were to win in May, she'd be the first woman ever elected to Congress in the district.

Dale, who characterizes himself as a "Bernie Sanders Democrat," is an insurance salesman who ran for Congress in 2014 as a candidate of the Green Party. He received about 1 percent of the vote.

The Democratic candidates rarely clashed in Thursday's debate, but they did reveal differences in style. Zunker frequently tied her answers to personal experiences, those of her family or others she has met on the campaign trail. Dale's answers were less focused. For example, the first words in his opening statement were "I don't know why I want to represent the 7th Congressional District." In response to a question about reaching conservative voters, he said "we need to focus on what we don't agree on. There is a lot of disagreement."

The Democratic nominee will face either state Sen. Tom Tiffany or Afghanistan war veteran Jason Church in the general election. The Republican candidates will appear on WPR on Feb. 6 for a debate with the same format.

Dale supports Sanders' "Medicare for All" bill, including its elimination of private health insurance.

"We've kicked this around enough," Dale said. "We have a dysfunctional health care system."

Zunker said she supports "a robust public option" expanding health care access to all, but she does not support Sanders' plan to put an end to private insurance.

"I am going throughout the district and I am hearing from people who do like their private insurance," Zunker said. "Health care decisions are deeply personal and I believe people must be empowered in making their decisions."

The candidates put different emphases on the best response to the crisis facing dairy farmers in the state. Zunker said federal policy needs to "ensure access to competitive markets" and "eliminate predatory business practices that hurt our small and mid-sized farmers."

Dale said an oversupply of milk is the primary cause of the dairy crisis, but did not specify the best policy response. But Dale was sharply critical of a new bipartisan proposal to create a $1 million grant program that would help farmers reduce the amount of manure used when growing crops.

"I'm very disappointed in the Democratic Party," Dale said, "especially with Gov. (Tony) Evers' suggestion that he's going to have the taxpayers use a million of their dollars to clean up the manure mess that these industrial dairies are creating."

He called for a moratorium on concentrated animal feeding operations in Wisconsin, and said "I don't know why anybody would invite them into the state to begin with."

In response to a caller who asked how the candidates would protect Second Amendment rights, Zunker said the Second Amendment is not under attack. She said she supports hunters and the rights of gun owners to protect themselves. But she said her perspective as a mom and as a school board president reinforces her convictions on the need for gun reforms.

"I see our children having to go through active shooter drills," Zunker said. "I made it through my entire academic career and never had to do one. My son is in third grade and he's been through seven. ... We do have a gun violence problem in this country. We need commonsense gun reform."

That includes universal background checks, an assault weapons ban and red flag laws that can permit courts to order temporary removal of guns from those found to be a danger to themselves or others. The two Democratic candidates agreed on those policies.

It's safe to say the eventual Republican nominee won't agree. Tiffany has been endorsed by the National Rifle Association, and Church has expressed his strong support for the organization's priorities as well.

The debate was moderated by Shereen Siewert, host of WPR's "Route 51," and Robin Washington, host of the Superior-based WPR talk show "Simply Superior."