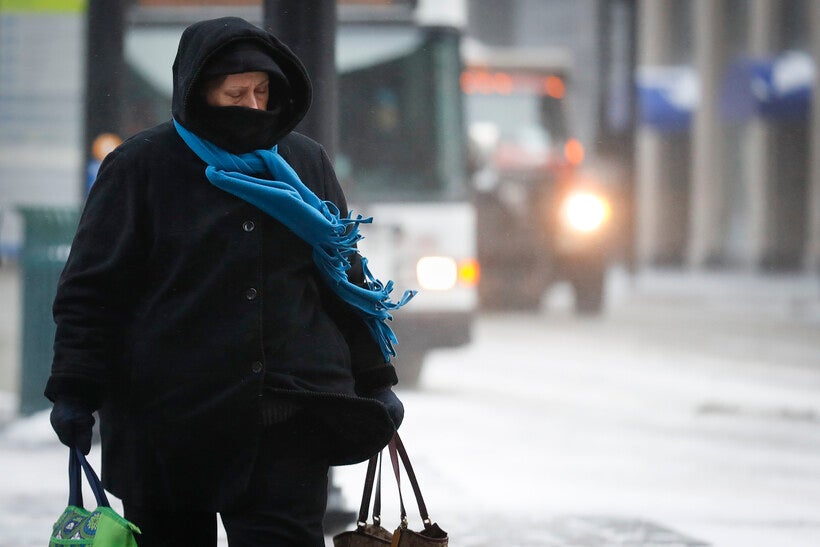 A commuter braves the wind and snow in frigid weather, Wednesday, Jan. 30, 2019, in Cincinnati. The extreme cold and record-breaking temperatures are crawling into a swath of states spanning from North Dakota to Missouri and into Ohio after a powerful snowstorm pounded the region earlier this week. John Minchillo/AP Photo

ListenDownload
Frozen State: Tips To Help You Get Through This Week's Deep Freeze
Communities Come Together To Keep Vulnerable Wisconsinites Warm

An arctic deep freeze has enveloped Wisconsin and much of the Midwest, forcing widespread closure of schools, businesses, government offices, and prompting the U.S. Postal Service to take the rare step of suspending mail delivery to a wide swath of the region.

Many activities are canceled and residents are huddled inside as the National Weather Service forecasts plunging temperatures from one of the coldest air masses in years.

Wisconsin state offices and agencies are among the long list of closures due to the extreme cold.

Gov. Tony Evers issued an executive order to close all non-essential offices Wednesday, saying the weather presents "an imminent threat to the well-being of the public." Most emergency response, public safety and public health employees are reporting to work, and the state Capitol was open Wednesday.

Local governments, schools, university campuses, courthouses and businesses were among hundreds of places across Wisconsin that were closed Wednesday, when the wind chill was forecasted to be as cold as minus 40 to minus 55 degrees throughout the day.

Universities across the state are scheduled to re-open Thursday and Friday, as WPR has reported.

According to the National Weather Service, the wind chills are expected to drop from the negative 30s into the negative 40s Thursday morning in the southern half of Wisconsin, with light snow expected in most of the area Thursday afternoon and evening.

Arctic air is plunging into North America. The culprit is a familiar one: the polar vortex. https://t.co/1ly5R1wnJj #PolarVortex #NASA pic.twitter.com/iM9fdZs4RO

Wednesday morning utilities were reporting power outages affecting thousands of people throughout the state, including nearly 3,000 in Mineral Point, more than 1,900 in Twin Lakes, and more than 1,000 near Sherwood.

As the day went on, the number of people without power dwindled. By late afternoon Wednesday, Alliant Energy and We Energies were helping less than 60 customers without power.

There were two power outages overnight Wednesday in Kenosha County that affected around 3,000, but power was back on within two hours, Alison Trouy, We Energies spokeswoman, said.

"Basically the cold weather constricted our power lines and broke some of the power poles," Trouy said.

Xcel Energy hadn't received any reports of power outages in Wisconsin on Wednesday, but spokeswoman Chris Ouellette said around 4,000 customers to the west of the Twin Cities lost power because of utility poles snapping. Ouellette said they've staged extra personnel at services centers in Wisconsin in case of similar problems.

"The biggest issue, the biggest thing is making sure we have the crews that can respond," Ouellette said. "So, we’ll call in extra crews. We’ll have extra crews available so when and if that does occur, they can respond quickly versus having to travel from a longer distance."

Officials throughout the region have been focused on protecting vulnerable people from the cold, including the homeless, seniors and those living in substandard housing.

In many cities, that involves keeping buses running. Passengers ride for free in Madison through Thursday night.

"We just want people to get on the bus right away and to not have to worry about pulling a pass out of their bag or out of their wallet or anything like that," said Madison Metro Transit spokesperson Mick Rusch. "We just want to keep the bus as warm as possible and keep everyone as safe as possible."

Buses are running in Milwaukee and Green Bay with full fare. Eau Claire is charging full fare for its regular routes and is ending its bus service at 6:30 p.m. Wednesday and Thursday instead of 10:30 p.m.

Eau Claire Transit Manager Tom Wagener said in an email they are running two extra buses at no cost for people traveling to Sojourner House, an area shelter for single adults.

In Madison and Milwaukee, people traveling to designated warming shelters can do so for free through the ride-share service Lyft, using the offer code WIJAYDEN19. According to a blog post, the company partnered with Wisconsin 2-1-1 and United Way to offer two free rides of up to $25 per ride through Friday night.

The Wisconsin Department of Transportation is urging people to avoid travel altogether if possible. In southwest Wisconsin, state patrol officers responded to 243 service calls between 11 p.m. Tuesday and 1:45 p.m. Wednesday. More than 90 percent involved vehicle problems due to the cold, according to a tweet.

"We’re seeing a lot of disabled vehicles throughout the system and throughout the entire state of Wisconsin," Clarke said. "The record cold that we’re seeing is definitely having an impact on the reliability of vehicles."

Clarke said people whose cars fail while they’re on the roads should stay inside and buckled up until help arrives.

The temperatures have lead to more than 1,600 flights being canceled at Chicago's airports. About 1,300 of Wednesday's canceled flights were at O'Hare International Airport, one of the nation's busiest airports. The temperature at the airport early Wednesday was negative 23 degrees, but wind chills in northern Illinois made it feel as cold as negative 57 degrees.

Officials have warned against venturing outside amid the dangerously cold weather, which is also affecting train travel in the Chicago area. Amtrak has canceled all trains into and out of Chicago on Wednesday, as well as most services Thursday.