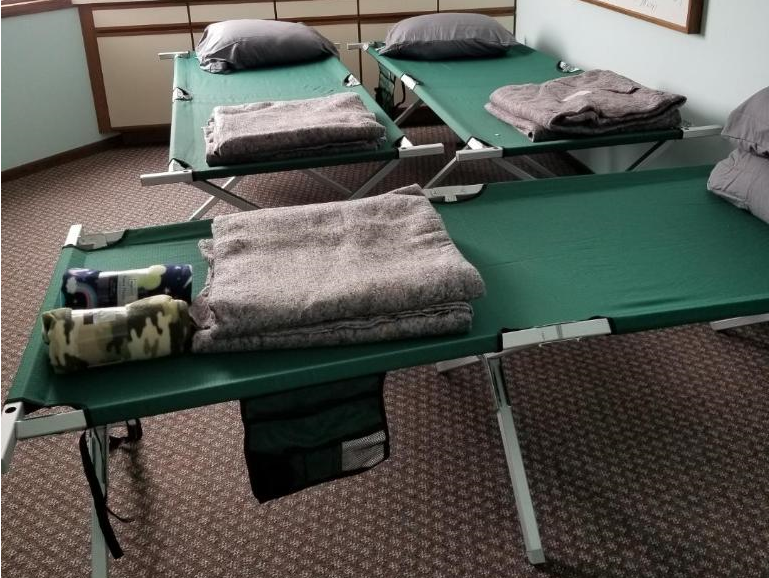 In August, Baraboo's only overnight homeless shelter closed for good. A sign outside of First Presbyterian Church in Baraboo announces the emergency shelter. Photo courtesy of Jori Ruff

Five months later, as forecasters called for temperatures to hit near-record lows, Baraboo resident Jori Ruff grew more concerned for the community of about 12,000 and its vulnerable residents with no place to go. The nearest overnight shelter is about a 30-minute drive away.

So Ruff, an English language teacher in the Baraboo School District, rallied community members together to find a location, and on Sunday identified the First Presbyterian Church as an emergency shelter through this week's cold stretch that is expected to bring wind chills colder than 50 degrees below zero.

Community organizations and concerned citizens such as Ruff have stepped up efforts to ensure their residents are sheltered and fed as frigid temperatures rip across the state. Fears of exposure, frostbite and hypothermia are also a concern as they can occur in as little as 5 minutes in the expected sub-zero temperatures.

Ruff, who has been at the church around the clock since Sunday, worked with the American Red Cross to set up cots and blankets for residents who need them. A separate family room has been designated for people who might need more privacy.

"Today's only Tuesday and it's exhausting, but I'm not sure my soul has ever been more filled just to see people come together," Ruff said of the numerous city organizations that have contributed to getting the temporary shelter up and running and spreading the word about it.

With room to house 50 people and enough food for only 40 at the La Crosse Warming Center, Silva put a call out to volunteers for food donations through the Catholic Charities of the Diocese of La Crosse Facebook page last week.

Silva, the center's coordinator, was trying to prepare for this week, as temperatures take a nosedive to 55 degrees below zero in the potentially historic freeze.

Much to her surprise, when Silva went to the center on Saturday, she found all three refrigerators full of food, on top of the 10 casserole dishes sitting in her car.

"La Crosse has got it going on," she said with pride of the city’s volunteer efforts to take care of its most vulnerable populations. In addition to providing food, volunteers are staffing the building, which has extended its hours. Normally, the shelter is open from 6:30 p.m. to 8 a.m. But the center's parent organization, Catholic Charities, opted to keep the center open until noon. That way, residents could be shuttled, with help from the Salvation Army, to the city's daytime hospitality center.

Susan Graf runs that facility, and said on average she sees between 50 and 60 visitors daily. With this particular cold snap, she said the numbers might be greater than 80.

"We’re doing everything we can to keep people warm and cared for and fed," Graf said.

Catholic Charities operates in locations across the state, including in Marathon County where it’s one of two warming shelters, said Philip Rentmeester, the county’s director of emergency management.

There’s no warming center that’s operated by the county, Rentmeester said, though some facilities are standing guard to offer assistance after Gov. Tony Evers declared a state of emergency on Monday.

Eau Claire County also doesn’t formally operate any warming shelters, though conversations have been held about what those options might look like. Tyler Esh, emergency management coordinator for the county, said there are numerous other resources that provide assistance.

As of Wednesday morning, community members raised $23,589. A majority of that, about $20,000, came in Tuesday — the first day of the fundraiser.

"This is Eau Claire and we take care of each other," Werthmann wrote on the Facebook fundraiser page.

Esh said his office has been using social media to get information out about hypothermia and frostbite, as well as the potential for carbon monoxide poisoning from alternative heating sources.

"If you have friends or family in the neighborhood that you think are at risk, check on them. Make sure they're OK," Esh said.