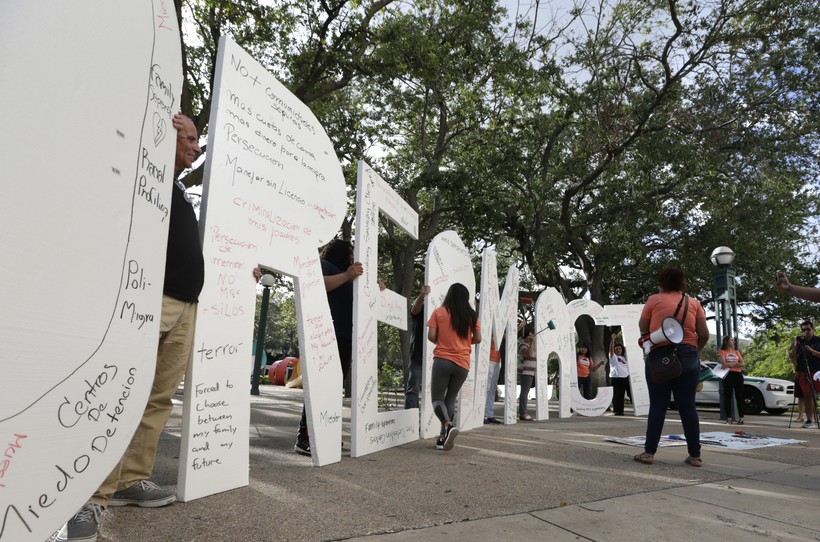 Immigrant rights supporters hold giant letters reading "Dream Act" as they demonstrate in favor of Congress passing a 'Clean Dream Act' that will prevent the deportation of young immigrants known as Dreamers working and studying in the U.S.,Friday, Oct. 13, 2017, in Miami.

Immigration lawyers in Dane County are part of a national network that will get expertise and funding from the Vera Institute of Justice to help those facing deportation.

The county is one of 11 communities around the United States getting help from the national justice group to provide attorneys for immigrants facing deportation.

On Thursday, immigration lawyers from each of the communities gathered in Ohio to launch the Safety and Fairness for Everyone (SAFE) Cities Network.

Madison immigration lawyer Grant Sovern said in an interview with WPR from Ohio that they will help those who aren't U.S. citizens navigate a complex court system. Deportation hearings are civil matters, so unlike criminal proceedings, defendants don’t get public defenders. And the logistics of representing immigrants in Dane County facing deportation can be difficult.

"It's very difficult in Dane County because A. people get detained and they go to Dodge (County Detention Center) or Kenosha (County Jail); and then B. when you have a hearing in front of an immigration judge, you have to go to Chicago for the hearing. So for a long time we have not had many lawyers, even paid lawyers, who will represent people threatened with deportation because it's just a difficult physical thing to help out," said Sovern, chair of the Community Immigration Law Center.

A study from the Vera Institute shows having a lawyer dramatically increases the likelihood of immigrants avoiding deportation and returning to their families, jobs and communities.

In September, the Immigration Law Center and University of Wisconsin Law School’s Immigrant Justice Clinic got a $100,000 grant from the Vera Institute to provide public defense to immigrants in Dane County facing deportation.

"Right now with the sort of mass deportation looming in our country and in Madison and Dane County, people are afraid to come forward so it’s really about safety. It’s called the SAFE Cities Network for many reasons," Sovern said. "One of the most important (things) is that if people have legal recourse and they have a lawyer who can help them they feel more confident about the system, they’re going to be more likely to call the police if something happens."

On Monday, President Trump said he would end temporary protected status for those from Central America. Earlier, he threatened to deport immigrants brought to the U.S. as children, so-called DREAMers.