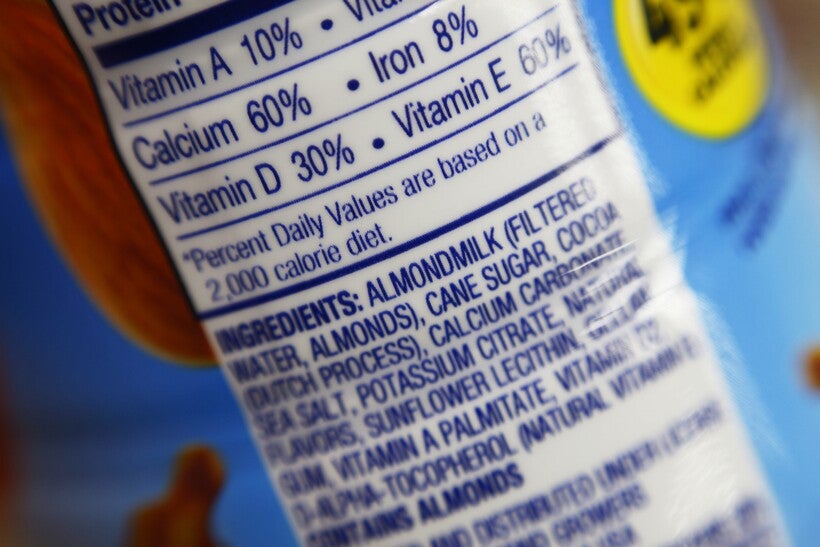 This Thursday, Feb. 16, 2017, photo shows the ingredients label for almond milk at a grocery store in New York. Dairy producers are calling for a crackdown on the almond, soy and rice "milks" they say are masquerading as the real thing and cloud the meaning of milk for shoppers. Patrick Sison/AP Photo

Dairy Groups Applaud Legislation To Crack Down On Dairy, Meat Alternatives In Wisconsin

Three Wisconsin lawmakers have proposed legislation to keep plant-based or lab-created products from being labeled as "milk" or "meat."

Under the legislation, food sold as meat or a meat product would have to come from the flesh of an animal or any part of an insect. That does not include products made from animal cells in a lab.

Another bill would require foods labeled as cheese, yogurt or other dairy products to be made with milk from a cow or another hooved mammal.

The legislation would apply the same standards to products labeled as milk, but only if 10 other states pass similar legislation by 2031.

Marklein said making sure other states have the same standards will help offset problems with interstate commerce. He said the milk labeling bill mirrors laws recently passed in North Carolina and Maryland.

Marklein said the legislation is meant to address consumer confusion about nutritional differences between traditional products and new alternatives.

"You can eat whatever you want to eat and drink whatever you want to drink, that’s fine. But I think the term 'milk' should be preserved for what comes out of a mammal’s mammary glands," Marklein said. "There's been an awful lot of, I think, confusion in the marketplace as to what the nutritional value of these products are."

Democratic U.S. Sen. Tammy Baldwin has introduced similar legislation regarding plant-based dairy products on the federal level, which would require the U.S. Food and Drug Administration to enforce current food definitions. The FDA took public comment on the dairy labeling issue last year but has not issued a final ruling.

"To try to label something milk or cheese when it really isn’t is misleading, and I think we have to clarify that for everybody, for the industry and for consumers," said Crave, who owns a dairy farm and cheesemaking business.

Crave said plant-based products should create their own food terms instead of "stealing the identity" of dairy products like cheese or milk.

But Michele Simon, executive director of the Plant Based Foods Association, said if the bills would pass, the legality of the labeling restrictions would almost certainly be challenged in court.

Three states are facing lawsuits from plant-based food advocates over similar meat labeling laws, including the Plant Based Foods Association’s lawsuit against the state of Mississippi. But Simon said her organization could end up withdrawing the suit after Mississippi officials proposed walking back the regulations earlier this month.

"All of these products in the marketplace have qualifiers. Nobody’s trying to fool anyone," Simon said. "The result in Mississippi was to acknowledge that, to say yes of course it makes sense that if a meat alternative has a word or phrase like vegetarian, vegan, plant-based, what have you, then that's reasonable."

Marklein said he recognizes the legislation could end in a legal battle, but it hasn’t changed his support for the new standards. He said the change would be a win for the state’s dairy farmers.

"They produce wonderful milk, good quality milk and they’re competing with products that are labeled as milk but have no connection whatsoever to the dairy industry," Marklein said. "For me, it's a way of supporting our agriculture industry at a time when they really need it."

But Simon said she thinks there should be room in the marketplace for everyone.

"Wisconsin butter makers can succeed on the merits of their own products," Simon said. "Convince the consumer to buy your product. I mean, that's how capitalism works, not to tip the scales by complaining to regulators."