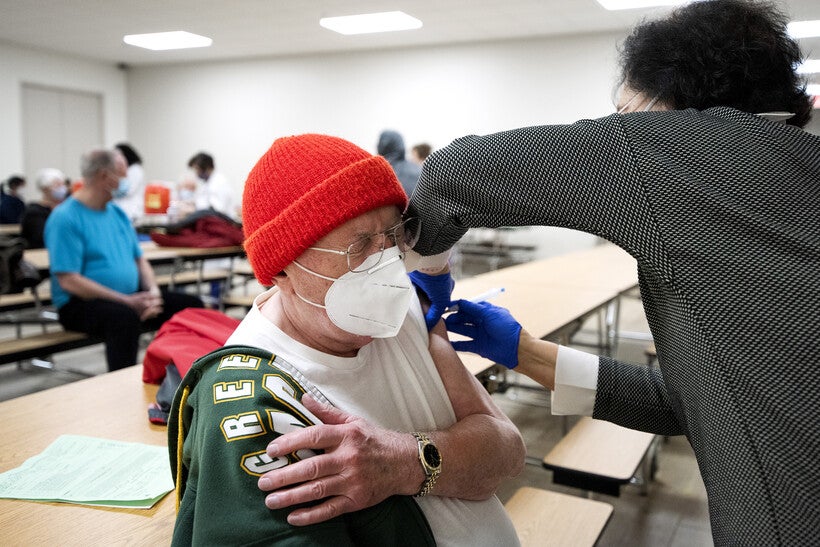 Health officials are pushing Wisconsinites to get vaccinated as COVID-19 bivalent booster rates have fallen short of their goals ahead of the holiday season.

The BQ.1.1 and BQ.1 variants of the omicron virus only recently emerged, but taken together, they now account for nearly 70 percent of infections nationwide, according to the U.S. Centers for Disease Control and Prevention.

"I've been surprised, or I guess discouraged or frustrated, by how few people have taken the updated booster. We've learned it really does make a big difference," said Dr. Ryan Westergaard, the state's chief medical officer and epidemiologist for communicable diseases.

He emphasized that the COVID-19 vaccine "is not a one-time thing" as people's immunity wanes over time.

A recent study by the CDC found that adults 65 and older who received the updated booster a week or more before getting infected were at a 73 percent lower risk of hospitalization than those who received at least two doses of the original vaccines.

"It's always been the case that people who are older have a higher risk of becoming severely ill and dying if they become infected with COVID," Westergaard said. He added that the "disproportionate burden of elderly patients has increased in the past six months, but not dramatically."

Westergaard said a good goal for booster rates for the older age group would be at least 80 percent. While the bivalent boosters have been available for the last few months, only about 42 percent of those 65 and older in Wisconsin have received the updated boosters, compared to about 18 percent of those eligible statewide.

Dr. James Conway, a professor of pediatrics and the medical director of the UW Health immunization program, blamed slow booster rates in part on misinformation, politicization and poor public health communication when boosters were made available.

"As the virus keeps changing and as information has become more and more accessible, people have kind of struggled to put it all together and to decide what to do for their own well-being," he said. "I think it's not their fault. It's that there's been so much competing information."

Conway pointed to a survey by the Kaiser Family Foundation in late September that found half of adults had heard "little" or "nothing at all" about the new booster. He said it was concerning that early uptake of the vaccine has slowed down, especially among older populations.

He said he’s worried about what that means for increased illness rates and hospitals already struggling to keep up with capacity.

Westergaard of DHS agreed, saying slow booster rates and the flu will add strains to the health care system.

"I think the thing we need to watch most carefully ... are hospital resources being stretched too thin, and that is something affected by both COVID and influenza," Westergaard said. "Our entire health care system has been working harder than it ever has been for the past three years, and we don't have the surge capacity that we need."

According to Westergaard, vaccines for both COVID-19 and influenza are available at most pharmacies without a prescription. The Pharmacy Society of Wisconsin is also working to set up influenza and COVID-19 vaccine clinics at long term care facilities across the state.

Westergaard said DHS has a free telehealth system for people to get a video consultation with a licensed provider if they test positive and can be prescribed antiviral medication.

Dr. Ajay Sethi, a professor of Population Health Sciences at the University of Wisconsin-Madison, said BQ.1 can be treated with Paxlovid, an antiviral drug. But in some cases, people with severe cases of COVID-19 may need to receive monoclonal antibodies, or injectable medical treatments at a hospital.

Sethi emphasized that masking remains one of the safest ways to protect yourself and the community against the virus.

"As people gather for the holidays, you know, getting a rapid test and verifying whether you could be infected is a good idea. And if you have any symptoms, stay home," he said.