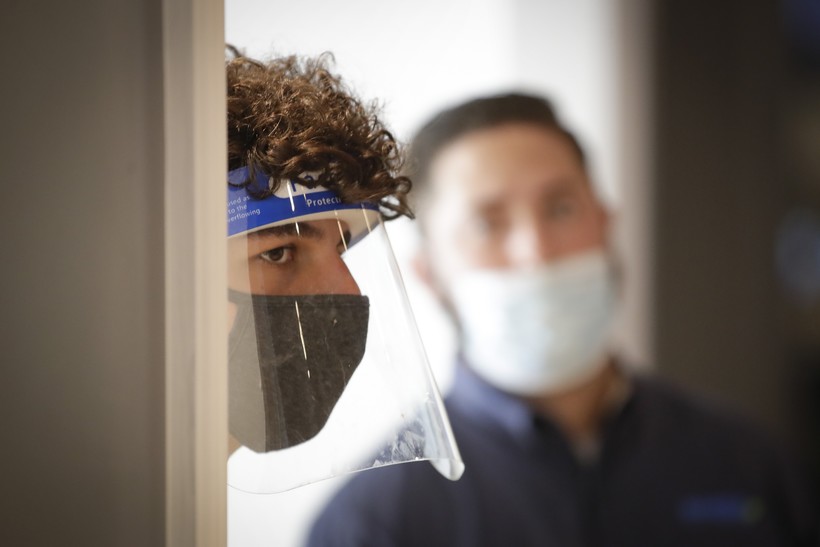 New reports of COVID-19 cases remained on an upward trajectory in Wisconsin on Thursday, as the state Department of Health Services issued a call for Wisconsinites to stay home this holiday weekend.

Wisconsin recorded 539 new cases of the disease in newly released data published by the DHS. That's holding steady from Wednesday's total of 540 new cases, although the state's seven-day average continued to rise, once again setting a new record high for the state.

According to the DHS, 20 percent of all COVID-19 cases that have been recorded in Wisconsin came during the past two weeks.

Many Wisconsinites will have time off work for the Independence Day weekend, which could mean more travel and less social distancing. Stephanie Smiley, the interim director of the DHS Division of Public Health, told WPR that would be a mistake.

"We're not out of the woods in this pandemic," Smiley said. "We want to make sure people are taking every precaution and that they understand this virus is still circulating and is actually picking up steam in many parts of the state."

The new numbers come a day after the DHS reported that half of all Wisconsin counties have high levels of COVID-19 activity.

Thursday's data brings the state's seven-day average for daily new cases to 502, the highest average seen yet. One week ago, the average was 370 daily cases.

The increase is most concentrated among people in their 20s, DHS officials said.

"In order to help decrease the infection rate in our state, we need younger Wisconsinites to take more precautions like staying home, physical distancing, and wearing cloth face coverings whenever possible," said DHS Secretary-designee Andrea Palm in a statement.

Smiley said an increasing number of those who contracted the disease had recently met up with others outside their own homes. Notably, only 1 percent of new cases reported attending a protest or rally during early June, according to the DHS statement.

The latest figures bring the overall total of positive cases in Wisconsin to 29,738, according to the DHS. A total of 793 people in Wisconsin have died from COVID-19, with seven new deaths reported on Thursday.

According to the DHS, 4.2 percent of all test results reported on Thursday were positive for COVID-19, bringing the average percentage of positive tests over the past seven days to 5.3 percent. The seven-day average a week ago was 4.1 percent; a week before that it was 2.8 percent.

The percentage of positive tests is often read by public health officials as a measure of overall testing levels. A high rate could indicate that testing in the state is limited, and skewed toward those already flagged as likely to have the virus. A lower rate could indicate testing is more widespread.

Wisconsin's daily testing capacity — based on the availability of test supplies and adequate staffing — has grown from 120 available lab tests in early March to 18,434 as of Thursday. The number of actual test results reported on Thursday was 12,878.

COVID-19 activity varies heavily from county to county. The latest coronavirus activity data from DHS, released on Wednesday, showed that 36 counties had a "high level" of coronavirus activity. Activity level designations are based on "burden," or the number of new cases per a county’s population over a 14-day period, as well as whether there’s an upward or downward trend in new cases.

Brown, Dane, La Crosse, Lafayette, Milwaukee, Trempealeau and Walworth counties had the highest case rates in the state, all with at least 100 cases per 100,000 people over the past 14 days. La Crosse County had over 260 cases per 100,000 residents.