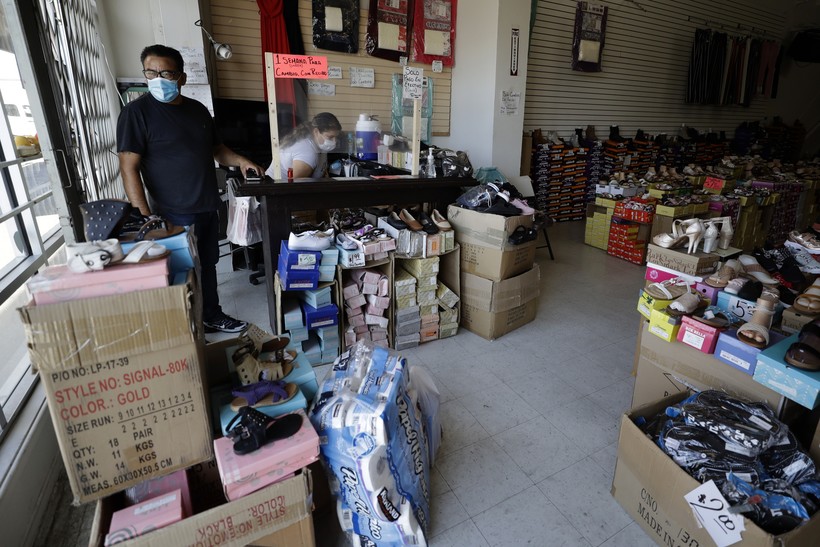 Marco Pinuela, left, looks out the window as he and his wife Irma Pinuela close up their shoe store, Shoes 4 Less, Tuesday, June 30, 2020, in Calexico, Calif. Gregory Bull/AP Photo

DHS: Half Of Wisconsin Counties Have High COVID-19 Activity Level

Half of all counties in the state have high levels of COVID-19 activity, and the state's seven-day average for new daily cases is the highest seen so far, according to the latest statistics released by the state Department of Health Services.

There have been 29,199 positive cases of COVID-19 in Wisconsin as of Wednesday, according to DHS. That's an increase of 540 cases from the day before, bringing the state's seven-day average of daily new cases to 490, a new high for the state. The previous high had been 479 cases per day, recorded at the end of May.

DHS also released new statistics on county-level COVID-19 activity on Wednesday. There are now 36 counties with a "high" COVID-19 activity level — a designation based on a county's number of cases per 100,000 residents over the past 14 days, and the extent to which that case rate is increasing. Last Wednesday, DHS had listed 22 high-level counties.

DHS reported 551,607 total negative tests for the coronavirus, an increase of 12,068 from Tuesday to Wednesday.

Wisconsin's daily testing capacity — based on the availability of test supplies and adequate staffing — has grown from 120 available lab tests in early March to 18,434 as of Wednesday. The number of actual tests reported on Wednesday was 12,608.

The percentage of positive tests was 4.3 percent on Wednesday. That figure has been decreasing over the past two days, going down to 4.7 percent on Tuesday. It was 5.3 percent on Monday, and 7.1 percent on Sunday — the highest it had been since May 20.

Of all positive cases, 79 percent of people have recovered, 3 percent have died and 18 percent remain active, according to DHS.