As we stand with the citizens of Wisconsin against racism, listening and learning will inform our action knowing that diverse voices enrich our lives and our spirits and challenge our perspectives. Read more
WPR
Coronavirus In Wisconsin 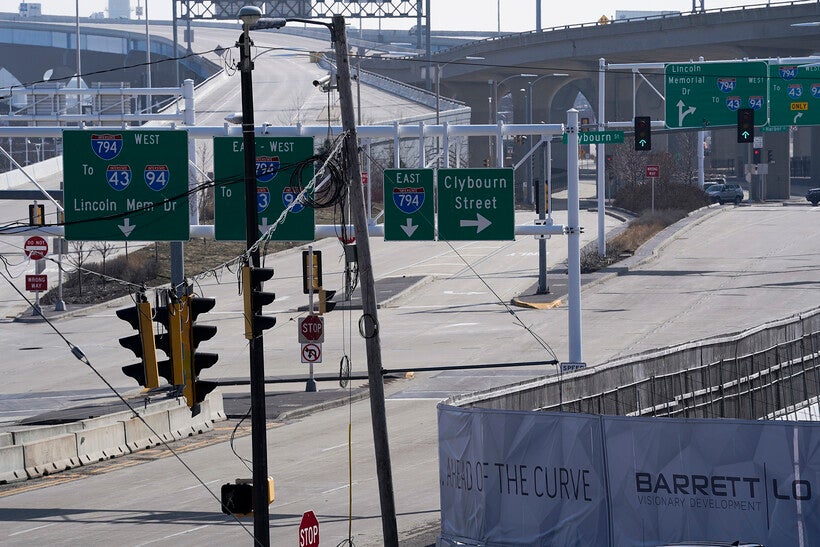 The onramp to the Hoan Bridge is void of traffic Tuesday March 24, 2020, in Milwaukee. Gov. Tony Evers issued an order Tuesday closing businesses deemed to be nonessential, ordered no gatherings of any size and placed restrictions on travel across Wisconsin for a month in an attempt to slow the spread of the coronavirus. Morry Gash/AP Photo

As Wisconsin's largest city, Milwaukee has seen a huge number of people infected with COVID-19, and the most deaths statewide. And one group has been hit particularly hard by the outbreak: the city’s black residents.

As of Thursday afternoon, the Milwaukee health department was reporting 1,193 known positive cases of COVID-19 in the city.

Also, as of Thursday, 115 people have died from COVID-19 in the state — 68 of those have been in Milwaukee County. Of those 68, 45 were black or African American.

Jeanette Kowalik, city of Milwaukee health commissioner, told WPR's "The Morning Show," it's something they're trying to track closely. Accurate data on race and ethnicity is important to targeting the response to the virus, she said. But, she said as the outbreak stretches on, the data on patients' race and ethnicity has become more and more incomplete.

"As the weeks have gone by, the unknown or unreported race or ethnicity variable has gotten bigger," she said.

Kowalik attributes the change in reporting to a few factors. First, she said that more labs are processing COVID-19 tests now. In the first weeks of the outbreak, there were only two labs processing tests, and health officials had "very precise" data, she said.

But the decline in reporting may also come down to the patient's personal preferences, she said.

"A patient may not want to provide their race and ethnicity data," she said. "This is something that's being investigated right now."

Kowalik said they do know that at least half of the city's known positive COVID-19 cases are in black or African-American people.

"What we started seeing over time is that what really elevated this was these underlying disparities that were tied to inequity, tied to racist policies and practices playing out in these health outcomes," she said.

In the coming weeks, Kowalik said public health officials will be keeping a close eye on if Tuesday's in-person election contributed to the further spread of the virus. She said the state was able to add if people went to the election in-person to its electronic disease surveillance system.

"So we can track if there's another wave of cases that will come out of in-person election activities," she said.