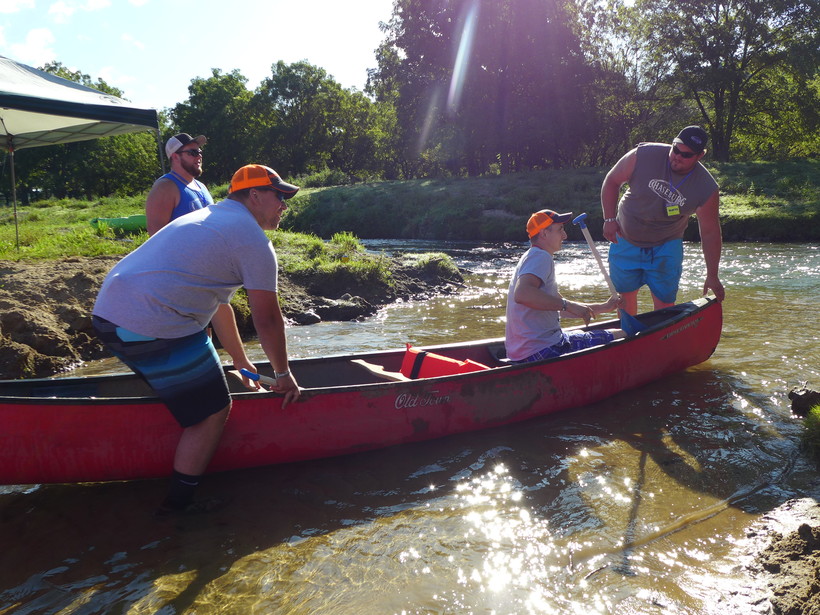 Coon Valley residents Cory Mikshowsky, left, and Lorenzo Nickelotti board their canoe at the start of the Coon Creek Canoe Race on Aug. 24, 2019. Hope Kirwan/WPR

The village, located about 30 minutes southeast of La Crosse, stopped hosting the canoe race around 20 years ago. So when the Coon Valley Business Association announced they were bringing the event back this year, Nickelotti said he knew he wanted to sign up — especially because the event was raising money for flood mitigation.

Flash flooding devastated Veterans Memorial Park and much of the village when southwestern Wisconsin got up to 10 inches of rain within a few hours last August. 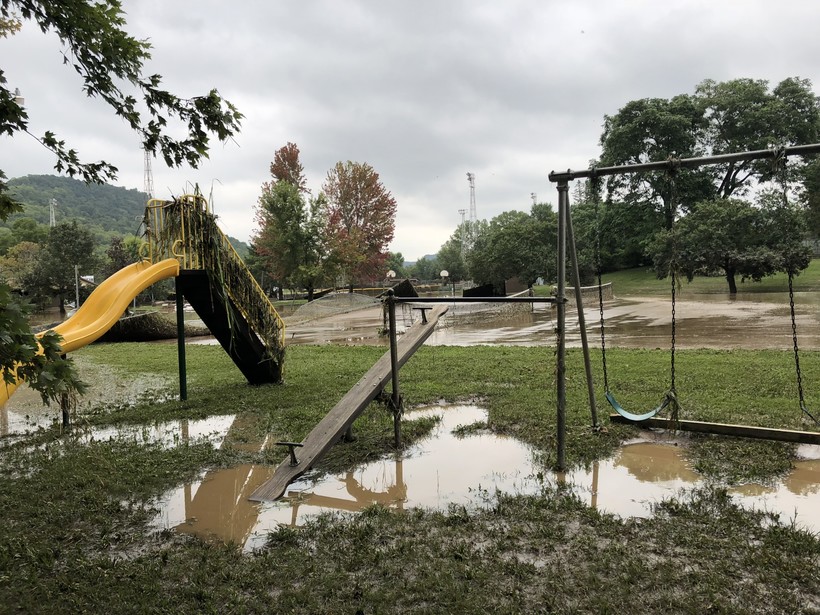 "We were just outside of (the flooding), so we didn't get hit. But a lot of people we knew did," Nickelotti said. "The day of, it's just devastating, driving around thinking that everything people had is just lost in some cases."

The August storm caused just under $3 million dollars in damage to homes and businesses in Coon Valley. Across Vernon County, there was an estimated $14 million in damage to public infrastructure.

Vernon County was one of nine counties to receive a federal disaster declaration and some Coon Valley residents received financial assistance from the Federal Emergency Management Agency to help them recover. But village officials say at least three homes and one business were damaged beyond repair. 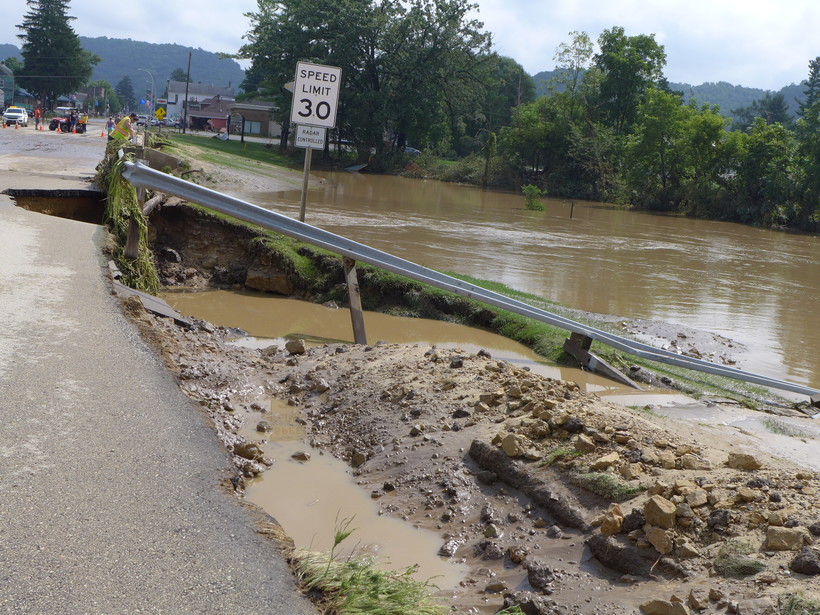 Geoff Lenser, president of the Coon Valley Business Association, said that’s scary for the village of less than 800 people.

"Those are customers that are leaving the town. Businesses, that's economic revenue that's in the town that's not coming back. So as the business association, we’re looking hard at this," Lenser said. "We’re going to try and do everything that we can to try to help this situation so businesses and residents and future residents feel comfortable coming back." 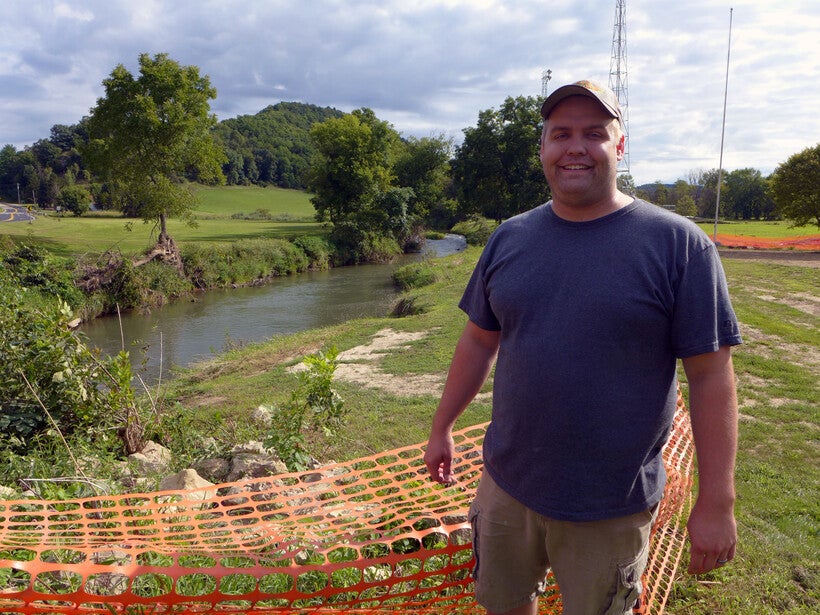 Having residents or businesses leave also means lost revenue for village government, at a time when they’re seeing increased costs.

Karl Henrichsen, village president, said they’re repairing a seepage problem discovered in the sewer lines after the flood. That's on top of the $250,000 it will take to repair the park.

"If we get another 10 inches of rain, we can almost count on we’re going to get flooded out again," Henrichsen said.

He said Coon Valley residents want to be proactive, especially after another flash flood damaged many of the same homes and businesses in July. But Henrichsen said he hasn’t found any solutions to the village's flooding problems when he’s asked county officials or the state Department of Natural Resources.

"The question that’s always asked to me is, 'What are we going to do to prevent it?' There's really nobody (that) can give me an answer," Henrichsen said.

Part of Coon Valley’s problem comes from three dams that were breached in the 2018 flood.

Monroe County Land Conservationist Bob Micheel said the structures haven’t been replaced because the county is applying for a federal grant to do a new watershed study.

He said the last study was done in 1958 and it didn’t anticipate more intense storms like those that continue to hit southwestern Wisconsin because of climate change.

"We can’t design anything to handle that kind of precipitation or that intensity," Micheel said. "And that is really raising a lot of problems with our conservation practices, let alone infrastructure that counties and towns have for roads."

Micheel said the federal government has not taken enough action to address climate change, so local officials have to start adapting to more intense rain and more flooding. That means taking years to apply for federal money to complete the new watershed study for Coon Creek, instead of quickly repairing the dams that protect Coon Valley.

"Would I like to have something in place to safeguard people and residents who live below these structures? Yes, but the reality is these are million dollar projects and nobody has that kind of money sitting around. So that's why we have to go through the federal process," Micheel said.

"Locally, there's a sense of urgency," Lenser said. "I just hope that the senators and representatives and the state institutions feel that sense of urgency as much as we do. Because we can't keep letting this happen."

In the meantime, Lenser said the village is doing what they can to protect themselves from the next flood.

He said the Coon Valley Business Association is bringing in a county conservationist to talk about what homeowners can do to help, like retaining water with a rain barrel.

"It's a small, small thing. But if everybody’s doing it, it creates a little bit bigger thing," Lenser said. "So we’re just trying to get everybody on the same page."

And they’re hoping the money raised by this year's canoe race will help them invest even more in flood mitigation. Lenser said they're still tallying up the total amount raised, but more than 134 canoe teams participated in the race and around 1,700 people attended the festival grounds in Veterans Memorial Park. 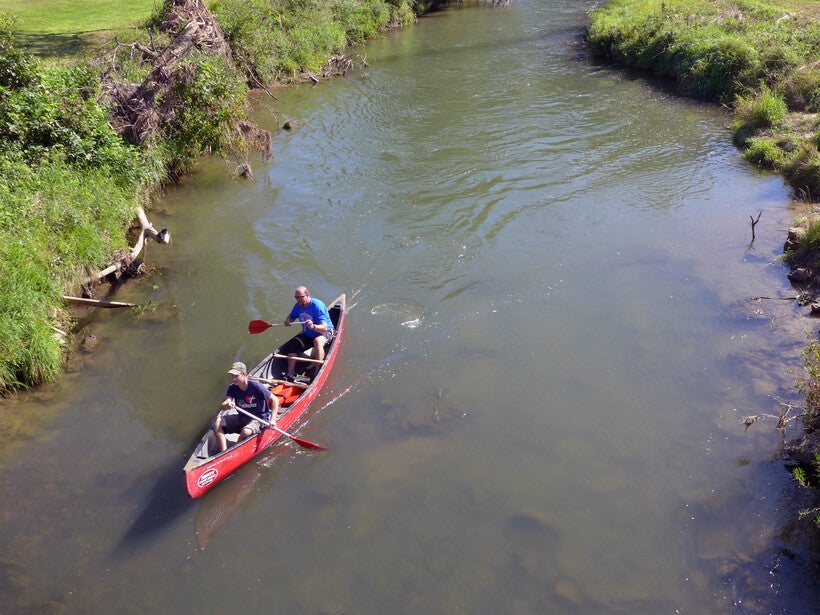 A team crosses the finish line of the Coon Creek Canoe Race on Aug. 24, 2019 in Veterans Memorial Park in Coon Valley. Hope Kirwan/WPR

After finishing the four-mile race down Coon Creek, Nickelotti and his partner Cory Mikshowky said the canoe race is also an opportunity for the village to take their mind off of the hardships caused by flooding in the last year.

Mikshowksy said he’s confident Coon Valley will find a way to get through more frequent flooding.

"Events like this are exactly why," Mikshowsky said. "It shows that this community is strong, that we can get together and make it through (future floods)."